ASUS has unveiled their flagship ROG MATRIX GTX 980 Platinum graphics card which features the GM204 core architecture coupled with a powerful DIGI+ PCB and a premium cooling design. ASUS launched their first ROG MATRIX Platinum, the GTX 285 and HD 5870 Platinum's back a couple of years ago and has seen several new variants such as the GTX 580, GTX 780 Ti, Radeon HD 5870, Radeon HD 7970 and Radeon R9 290X. Today, we are looking at the latest and updated revision which features the Maxwell GPU. 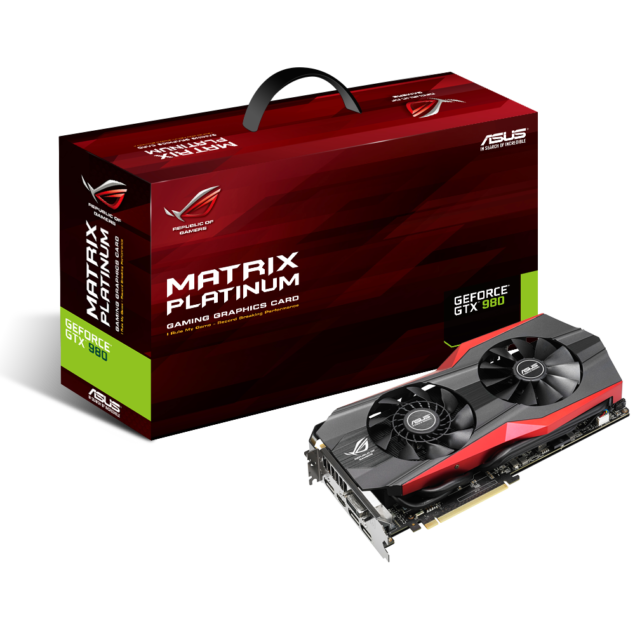 The specifications of the card are pretty straight forward, for starters, the ROG MATRIX GTX 980 Platinum does feature the GM204-400-A1 core that features 2048 CUDA Cores, 128 texture mapping units and 64 ROPs. Their is a 4 GB GDDR5 VRAM interfaced with a 256-bit memory bus that is clocked at 7 GHz (7010 MHz) clock speed effectively. Core clocks for the card are maintained at 1342 MHz boost, the reference clock speed was not told by ASUS however, it should be somewhere in between the 1200-1250 MHz range. The ROG MATRIX GTX 980 has a powerful PCB design which will allow overclockers and enthusiasts to push the card to its limit. Details of the PCB are mentioned below.

The ROG MATRIX GTX 980 Platinum features 12 Phases for core and 2 Phases for memory with their latest DIGI+ II design featuring the high quality components, ICs, Super Alloy Power design, chokes and capacitors to deliver unprecedented performance to overclockers and enthusiasts. Juice is provided through dual 8-Pin connectors so we are looking at a TDP around 300W which means that a lot of power will be put into the VRM to unleash the full potential of the graphics card. The PCB is larger than the reference model due to the custom design and the addition of more phases on the board. The VRMs are cooled by a large black colored heatshrink which offers cooling support.

For cooling, ASUS has went with an all black designed heatsink which is a large stack of aluminum fins cooled by two 92mm fans with CoolTech technology similar to the design featured on the DirectCU Mini graphics card. The heat sink features an internal heatpipe design, we can’t get an exact number but the one black colored heatpipe that comes out of the heatsink is large and measures at 10mm in diameter. The heatsink features a DirectCU II contact surface which dissipates heat from the core to five black coated heatpipes that circulate the heat to the large aluminum fin array.

According to ASUS, reviews of the card are due for next week. Pricing on the other hand remains a mystery but expect a hefty premium tag on the card over the reference variants around the $600 US.