Looks like the Asus ROG GX700 that we reported on back several months ago is finally available for pre-order within the UK over at overclockers.co.uk

For those not familiar the ROG GX700 is the world’s first liquid cooled cooled gaming laptop thanks to the ROG exclusive Hydro Overclocking System cooling doc.  Featuring an Intel Skylake mobile K-SKU and full Nvidia Geforce GTX 980 this is a full on desktop replacement. 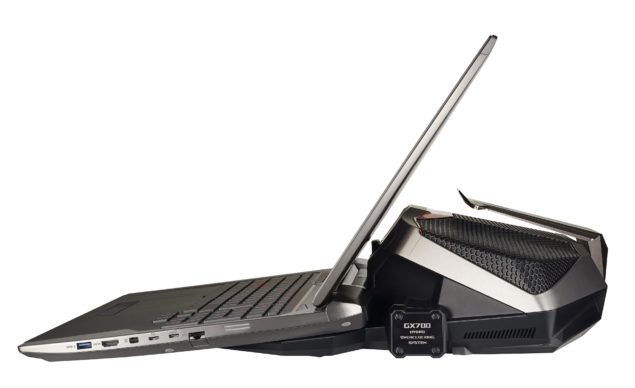 According to Asus the Hydro Overclocking system uses a pump to circulate coolant to the heat-generating components, the GPU and CPU, and back to the cooling module.  The cooling module consists of two radiators and fans to dissipate the heat.  They’re using a patented connection allowing leak-free operation between the module and the laptop.

Asus is claiming rather impressive overclocking potential with the cooling module attached.  Their claim is a bit muddy in description stating overclocking the CPU results in performance gains up to 48%, the DDR4 RAM being boosted up to 43% from 2133mhz to 2800mhz, but no claims on the GPU overclocking.  We don’t know what validation methods Asus is using for these results or temperatures so take them with a grain of salt until we see real world testing.

But, if you’re looking for one of the most wild and innovative gaming laptops on the market the GX700 is available for pre-order with a sticker price of £3,499.99