After the successful launch of their ROG MATRIX GTX 780 Ti Platinum graphics card, ASUS is now planning to launch their latest ROG Striker GTX 760 Platinum which brings the enthusiastic ROG design and overclocking capabilities at a gamer friendly price range. 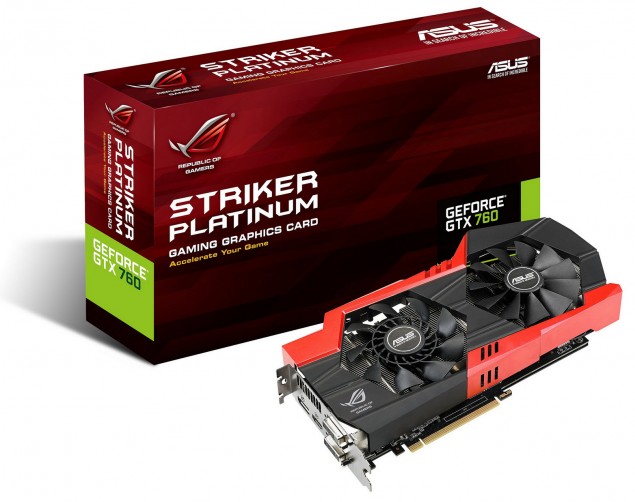 NVIDIA's partners have released some impressive designs of the GeForce GTX 780 Ti graphics card and several other GK110 based graphics cards. The GeForce GTX 760 has also seen some interesting design schemes from a few manufacturer's with the most interesting model being the ROG GTX 760 Mini and GTX 760 Ti Mini-ITX from ASUS and MSI respectively.

The ASUS ROG design has so far been available only to the enthusiast high-end market in the form of ROG GTX 760 Mars, ROG GTX 780 Ti Platinum, ROG GTX 780 Poseidon. ASUS is now bringing the ROG scheme back to the market it was primarily focused towards, the gamers. The ROG Striker GTX 760 Platinum Gaming is aimed at the gaming market with a new and improved PCB design, better cooling and several other enhancements. There are no specific details regarding the card but we will talk about the design and aesthetics nonetheless.

ASUS has moved away from their DirectCU II design with the ROG Striker GTX 760 Platinum and went with an exclusive ROG cooler shroud which resembles the one featured on the ROG MATRIX GTX 780 Ti Platinum. The black and red strikes of color along the shroud and edges adds a nice touch representing the ROG (Republic of gamers) brand. The card uses a heatsink that incorporates a large stack of aluminum fins cooled by two 92mm fans with CoolTech technology similar to the design featured on the DirectCU Mini graphics card. The several heatpipes and Direct Contact surface effectively transfer heat to the heatsink and out of the card.

For power delivery, ASUS has went with their latest DIGI+ II design featuring the high quality components, ICs, Super Alloy Power design, chokes and capacitors to deliver unprecedented performance to overclockers and enthusiasts. Juice is provided through 6+6 Pin power connectors so we are looking at a TDP around 225W. The PCB is larger than the reference model due to the custom design and the addition of more phases on the board. The VRMs are cooled by a large black colored heatshrink which offers cooling support. Display outputs include Dual-Link DVI, HDMI and a full length Display port.

Much of the details such as clock speeds and pricing will be kept a secret until launch, while the launch itself is planned for Q2 2014. The card is a decent entry in ASUS's ROG lineup and if priced right, could become a good solution for 1080P / 1440P Gaming if ASUS went with a 4 GB GDDR5 VRAM on the ROG Striker GTX 760 Platinum graphics card.