Update: New socket pictures show a lot more pins than just 6, you can check the link out in the comments below.

[Mini-Editorial] I was pretty impressed by ASUS's recent innovation in the socket sector. I am talking ofcourse about the ASUS OC Socket, which boasts improved OC performance by granting the user more stability and higher voltage control thanks to more pins. Now while this all an impressive feat for an AIB to do, it begs the question whether we are looking at LGA 2011 at all.

Is the ASUS OC Socket Intel LGA 2011 at all? Or is it actually the 'LGA 20XX' Homegrown Socket?

The LGA 2011-3 is Intel's Socket designed to be used with its HEDT Processors. Now the 2011 indicates the amounts of pins in the socket and the '3' indicates the revision of the socket. Now that means that any LGA 2011 socket will have exactly 2011 pins. So is the ASUS OC Socket LGA 2011 then? Umm, no technically it is not. The ASUS OC Socket is compatible with the LGA 2011 but it is not in reality 2011. If you were to give it a name in Intel's current nomenclature it would be LGA 2017 (the OC Socket has 6 additional pins apparently). Since ASUS has basically designed a completely new socket, I wouldn't expect it to be rock solid and completely bug free at launch. 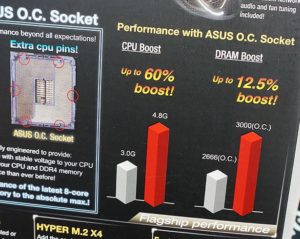 Let's take a closer look at what exactly ASUS has accomplished. Haswell uses an FIVR (Fully Integrated Voltage Regulator) and as the new processor architectures have appeared, Intel has become more and more secretive about the workings of the pinouts. Not knowing where the voltage lines lay, ASUS basically bruteforced the entire contact points present on 2011 processors to figure out where the new pins should touch to grant unhindered access to voltage. The result? ASUS OC Socket lets you effectively bypass any FIVR compulsions Intel has in place. This means that you will be able to achieve higher and more stable overclocks probably at a lower voltage. I have a feeling ASUS might be a trend setter with this and seeing they already have a patent pending, might earn big bucks from it too.

And that's not it either. We already know that Intel is dropping the FIVR, so it doesn't come as a surprise that it is not that fine tuned because the extra pin outs on an ASUS Proprietary OC Socket allow access to voltage lines for DDR4 Voltage, enabling greater overclocking than you would normally be able to achieve. Now we didn't receive an ASUS X99 Deluxe engineering sample so Overclockers.ru was kind enough to send us an image of the box art. They claim a 60% improvement in the CPU sector and 12.5% improvement (3000Mhz) for DDR4 RAM. Now there's something else I noticed here, ASUS's language is quite loose, these extra six pinouts might just be the six sections where the excess contacts are. Which means that there could be more or less than just six pins. Either way, you know the drill. Whatever the additional pin count is, add that to 2011 and you get the real name of the socket present in these special ASUS mobos.

#ASUS's Proprietary OC Socket is pretty impressive for an AIB to do, esp considering its not technically 2011. http://t.co/YiHOwH9akk