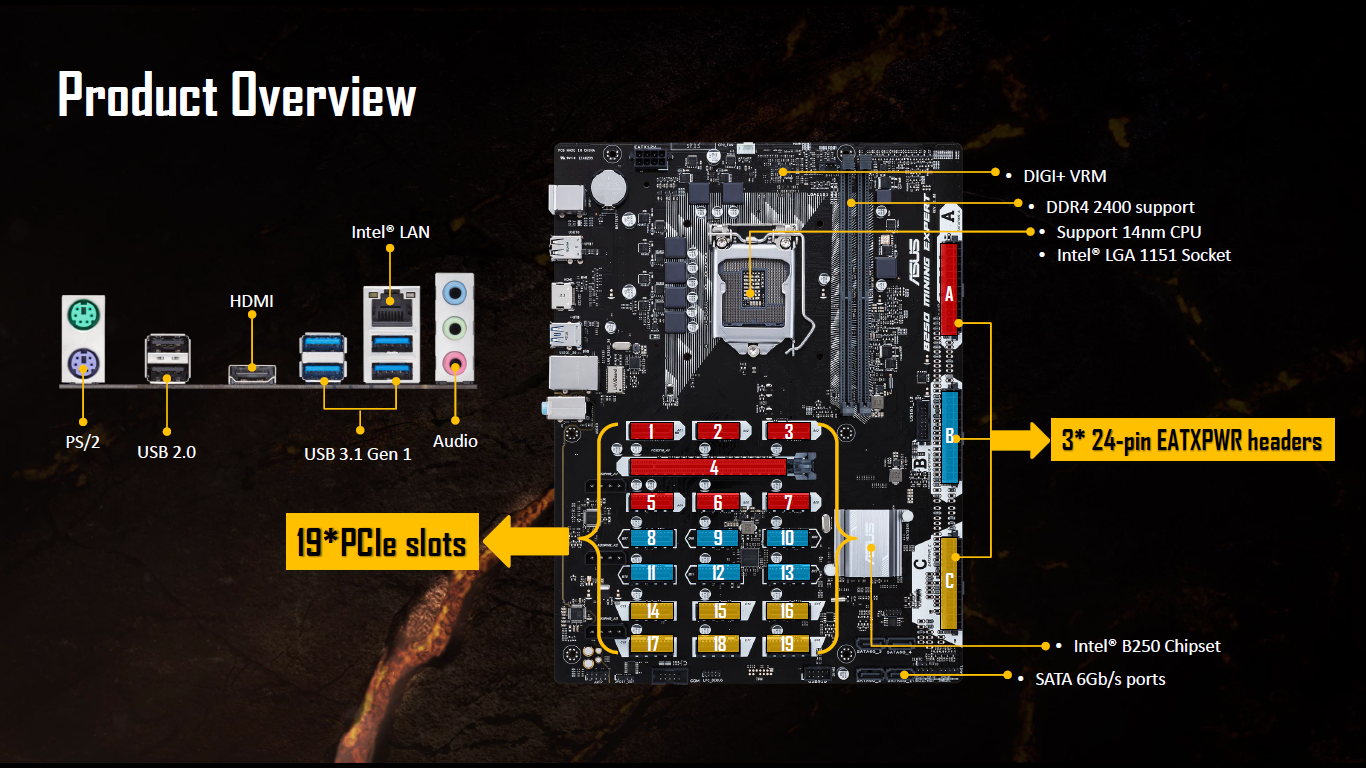 ASUS has officially announced their latest mining product, the B250 Expert Mining which aims to be the best motherboard for cryptomining enthusiasts. The motherboard comes with an enhanced list of features that will make mining all the better for users.

The ASUS B250 Mining Expert motherboard features a range of advanced technologies, including Triple ATX12V Power Delivery and PCIe Slot State Detection & Mining Mode BIOS Optimization. It also comes with a mining specific BIOS that delivers superb performance by higher hash rate and better ROI. Some features of the motherboard include:

Taking a detailed look at the motherboard, we can note that the ASUS B250 mining features the LGA 1151 socket and is based on the B250 chipset. The motherboard supports all Intel 7th and 6th Generation processors. The board supports up to 32 GB of DDR4 memory in dual channel mode with 2400 MHz clock speeds. Additionally, the motherboard comes with a 6 phase DIGI+ VRM that should deliver optimal CPU stability. For storage, we are looking at four SATA III while there are a total of 6 USB 3.1 and 4 USB 2.0 ports for I/O. Rear panel I/O includes a pair of PS/2 ports, 2 USB 2 ports, 4 USB 3.0 ports, HDMI, Intel LAN (I219V Gigabit) port and an 8 channel audio jack that will be powered by the Realtek ALC887 codec.

The juicy part is the expansion coverage on the ASUS B250 Mining Expert. There are a total of 19 expansion slots of which 18 are PCIe Gen 3.0 x1 and a single slot is PCIe Gen 3.0 x16. ASUS has officially stated that the latest GPU drivers from AMD and NVIDIA only support up to 8 GPUs when running in multi-GPU setting.

A new driver is said to launch in late 2017 by AMD that will enable up to 19 GPUs to be supported by the motherboard. Till then, users can populate up to 16 graphics cards by mixing 8 AMD and 8 NVIDIA GPUs on the motherboard. It still makes it the world's first board to support 16 GPUs so far. ASUS has released a detailed slide to guide users how they can populate the expansion cards based on the graphics card(s) used: 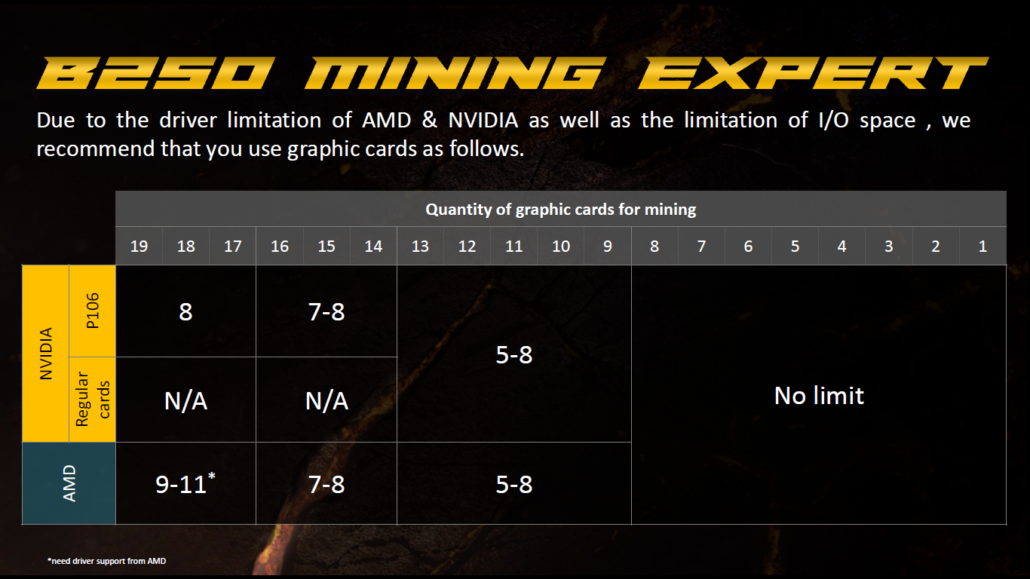 To support such a large number of expansion slots, ASUS has divided the slots into three groups. Each group has its own dedicated 24 Pin ATX12V power supply which makes operations stable in multi-GPU use. Another interesting feature is the Post UI display which will provide a image of the expansion slots area and show which slot is populated. It's helpful since the UI will also show that all slots are working properly, those slots that aren't will show an error display making it easier for users to locate the faulty card.

ASUS ships the motherboard with a mining specific BIOS that is enabled by default. The product looks really well designed for mining enthusiasts and would be very popular based on its pricing which is said to be really low compared to competitors. The motherboard is confirmed to retail at just $130 US which is a good price for the set of features it offers.