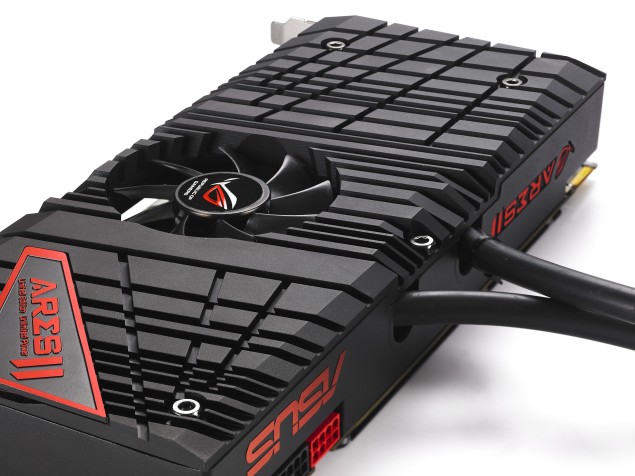 The next generation ASUS ROG ARES III graphics card will feature two Hawaii XT cores, each featuring 2816 stream processors, 176 texture mapping units and 64 ROPs. This equates to 5632 cores on both the ASUS built custom and the upcoming reference model from AMD themselves. The reference Hawaii based dual-chip card can be expected around Q2 2014 but we don't have any confirmed details regarding the specifications, we do know that the card is codenamed  after Vesuvius which a is a stratovolcano in the Gulf of Naples, Italy.

The ASUS ROG ARES III is said to feature a custom built PCB which is similar in design compared to ASUS's last ARES offering, the ROG ARES II which featured Dual Tahiti cores. The card had massive power requirements featuring a custom loop hybrid cooler. The card came just a few months before the official Radeon HD 7990 launch from AMD itself. The ARES II featured a hefty PCB design which makes use of 20 Phases featuring the DIGI+ VRM design. Three 8 Pin PCI-e connectors were required to power the card. This puts the rated TDP around 500W with an PSU Recommendation of no less than 850W. A similar power requirement could be expected from ARES III if the PCB is similar.

The ARES III would also feature a 8 GB GDDR5 memory compared to the 6 GB GDDR5 memory on the ARES II. It would run across a 512-bit bus compared to the 384-bit on the previous card. Clock frequencies for core and ram are not mentioned since the cooling assembly of the card is still under development stage so will take some time to show up. Following is a comparison chart of ASUS's ROG ARES lineup which spans three generations of Radeon chips:

Considering that this would be a premium model which would be manufacturers in limited numbers we can expect a huge price tag on the ASUS ROG ARES III. The card will most probably be sold for above $1500 US considering the previous ARES SKUs and would be limited in just a thousand parts. Expect launch of the card between Q2 2014 at Computex.