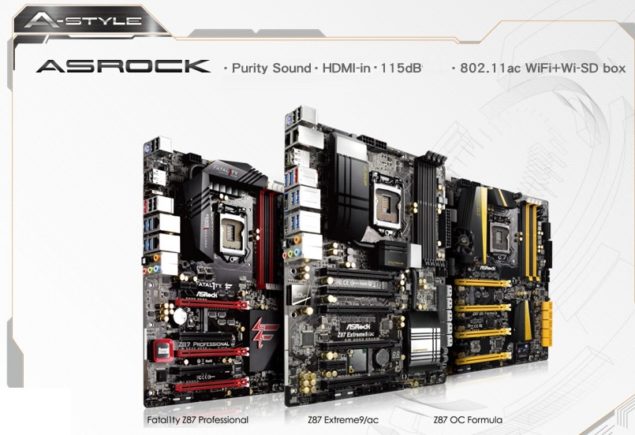 ASRock Z87 motherboards include their famous lineups such as the Extreme, Formula and Professional series boards. Today, we will be detailing the complete ASRock motherboard lineup which would launch alongside Intel's Haswell platform on June 3rd 2013.

ASRock has divided their Z87 motherboards into three tiers – Z87 Formula, Z87 FATAL1TY and Z87 Extreme. Each tier comes with their own distinctive line of motherboards that are packed with various features for overclockers, gamers and enthusiasts. Talking about features, i would want to mention A-Style which is a feature-set of new and amazing technologies the ASRock Z87 motherboards aim to provide, some of the details can be seen below:

ASRock’s complete lineup is fit with the A-Style purity sound technology that allows for clear and high-quality audio for audiophiles. It is powered by an Realtek ALC1150 chip that allows 7.1 Channel audio and coupled by dual TI NE5532 Amplifiers (Headset 600 Ohms/ Differential 115db Sonar). The chip is located underneath an EMI cover that reduces EMI and distortion. It comes with solid state gold capacitors which offer better stability.

ASRock’s Z87 motherboards are the worlds first certified boards to get 802.11/ac support that offers wireless connection to local area networks on the 5 GHz band. The 802.11/ac WiFi chip is located on select ASRock Z87 motherboards which notably include the Z87 Extreme 6/ac, Z87 Extreme 9/ac and Z87 Extreme 11/ac. Other features would also be available with the include Wi-SD Box that includes antennas, four USB 3.0 ports and a SD 3.0 card slot.

With A-Style features, ASRock would allow the simultaneous use of multiple devices through a single HDMI port through the HDMI-In technology. Users can connect their gadgets to the HDMI connector and switch through the screen at any time through the click on an hot-key without waiting to switch over from an other device as done on traditional PC setups.

Forgot to switch off your PC while heading out for work or a trip? Don’t worry, ASRock’s latest Home Cloud technology helps you turn on and off your PC wirelessly from anywhere in the world by sending a signal through the mobile devices that is supported by both Qualcomm and Intel Ethernet LAN. You can check out the full details about ASRock's A-Style feature here.

The FATAL1TY lineup includes two products, the Z87 Professional and the H87 Performance. Detailed specs are mentioned below:

The ASRock Z87 professional is a high-end motherboard which packs an impressive red/black color theme and a set of nice looking heatsink including heatpipe cooling solution. For storage, the board offers 10 SATA 6GB/s ports while expansion slots include three PCI-e 3.0 x16, 1 PCI-e 3.0 x1 and 2 PCI legacy slots. The board includes Sound Core 3D that provides high quality and enhanced audio output through the 8.1 channel audio jack, dual Gigabit Lan ports and several USB 3.0 ports for connectivity options. The Z87 Professional also includes an M-PCI-e slot to support either mSATA SSDs or WiFI cards. 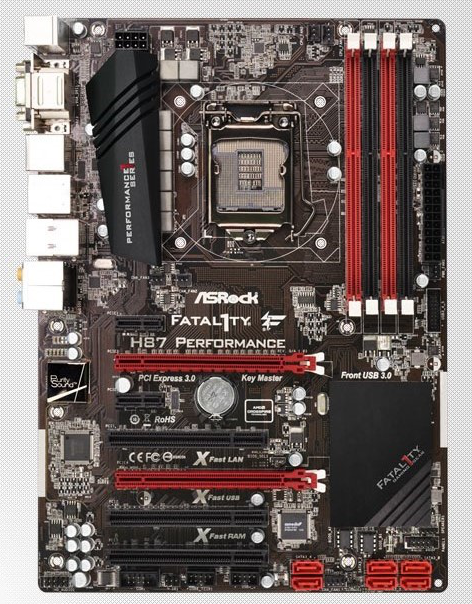 The H87 Performance also falls under ASRock’s Z87 FATAL1TY tier providing a nice feature set for budget minded users. It comes with an 8-Pin connector that powers the LGA 1150 processors and has display connectivity options such as VGA, DVI and HDMI to run the 4th generation Intel HD Graphic chips. Storage on the board includes six SATA 6 GB/s ports while expansion slots include two PCI-e 3.0 x16, three PCI and 2 PCI-e 3.0 x1 slots.The H87 performance may be limited by overclocking features since it comes with a different chip that doesn’t provides most basic overclocking features to users. The board comes with ASRock’s A-PureStyle audio chip for high quality audio output.

Next up is ASRock’s overclocking line of Formula Z87 motherboards that would include atleast three products – Z87 OC Formula/ac, Z87 OC Formula and Z87M OC Formula.

The Z87 OC Formula is ASRock’s highest tier board made specifically for overclocking professionals and enthusiast. With its feature rich set of components and parts that include dual 8-Pin connectors to supply unprecedented power to the CPU socket, a black/yellow color theme including hybrid (Air + Water) cooling solution that sits on top of the electrical components making use of premium parts such as High C-Caps and a Digital PWM design. ASRock’s Z87 OC Formula uses a 12 Phase VRM and includes the following:

The Z87 OC Formula comes with the most amazing Debug OLED system ever developed for motherboards with a fully visual interface that displays CPU temperature/voltage and more as seen in the picture.The design scheme looks absolutely fantastic and has several overclocking features such as the already mentioned Debug LED along with Dual voltage measurement and OC switches near the DIMM slots. The motherboard makes use of  four PCI-e 3.0 x16 slots and two PCI-e 3.0 x1 slots for expansion while 10 SATA 6GB/s ports offer storage. There’s also an onboard M-PCI-e slot while audio is provided through the high-quality Purity sound chip onboard. The Z87 OC Formula comes with HDMI for display and several USB 3.0 ports for connectivity.

Once again i would like to mention the OLED display which can display different OC profiles, activated OC profile, clock speeds, temperatures for GPU/CPU, BClCK/Ratio settings, Voltages and CPU usage. The OLED should be a standard for all next generation motherboards.

The main difference between the Z87 OC Formula/ac and OC Formula is that the /ac model comes with an integrated 802.11ac network chip for wireless internet connectivity.

A live demonstration of the board's A-Style Waterproof feature can be found here. 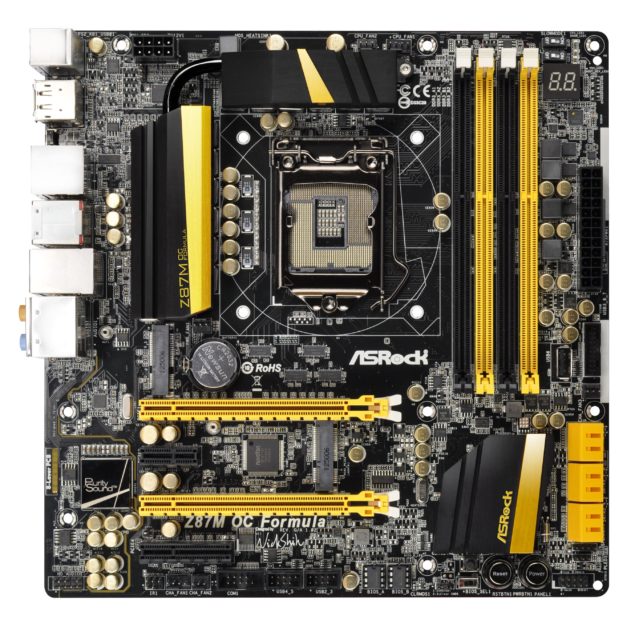 The ASRock Z87M OC Formula as the name suggests is an M-ATX variant of the Z87 formula with a few features left out. it maintains a yellow/black color theme and uses a heatpipe cooling solution, has 6 SATA 6GB/s ports, two PCI-e 3.0 x16, 1 PCI-e 3.0 x4 and 1 PCI-e 3.0 x1 slots. It uses a normal Debug LED and a few OC switches near the PCH heatsink. The I/O makes use of Display port and HDMI connector for display, Gigabit LAN and many USB 3.0 ports. It also uses ASRock’s Purity sound chip for high quality audio output. Pricing would obviously be a bit low compared to the Z87 OC Formula.

The ASRock Z87 Extreme 9/AC just falls under the flagship Z87 Extreme 11 motherboard making use of a matte black and silver color theme. The heatpipe cooling solution runs from the VRM Phases all the way down to the PCH. The CPU socket is powered through Dual 8-Pin connectors and has the most basic features for overclockers.

Expansion slots include five PCI-e 3.0 x16 and a single PCI-e 3.0 x1 slot while for storage there are 10 SATA 6 GB/s ports. It comes with onboard WiFI module and Purity sound chips for the best available experience. The Z87 Extreme 9 uses Dual Thunderbolt ports, HDMI, display port and several USB 3.0 ports for connectivity.

The ASRock Z87 Extreme 6 is the next in line of the Extreme series boards featuring a much more basic design compared to the Extreme 9 but still packs a nice set of features such as 10 SATA 3 ports, 3 PCI-e 3.0 x16 , 1 PCI-e 3.0 x1 and two PCI slots and onboard WiFi and PureSound modules.

The ASRock Z87 Extreme 4 is a mainstream motherboard which is currently listed for 999 Chinese Yuan or $160.99 US. Since Chinese prices are on the high side, we expect the retail price in US would be around $149.99 US. The motherboard makes use of the Z87 PCH and has a 12 Phase VRM fitted with top of the line components and golden solid state capacitors. It has a brown dual layer PCB and the electrical components along with PCH are cooled off by three separate heatsinks. The Z87 Extreme 4 comes with four DDR3 DIMM slots which support upto 32 GB of memory with rated speeds upto 2666 MHz+ O.C.

Expansion slots include three PCI-e 3.0 x16, two PCI-e 3.0 x1 and two legacy PCI slots. You can note the ASRock XFast RAM, XFast USB and XFast LAN labels near the expansion slots which have been advertised since ASRock’s 7- series motherboards. For storage there are 8 SATA 6GB/s ports near which two USB 3.0 headers are located offering upto 4 USB 3.0 ports. The motherboard has a limited amount of onboard features which include Power on/off, reset switch and a DEBUG LED. The rear I/O panel on the Z87 Extreme 4 includes 6 USB 3.0 ports, dual HDMI, Display port, E-SATA, DVI, VGA, 8.1 Channel audio powered by Sound Blaster core “Purity Sound” chip, Gigabit LAN and a PS/2 port.

The ASRock Z87 Extreme 3 is another mainstream motherboard be priced around $119.99 US. The motherboard makes use of the Z87 PCH and has a 8 Phase VRM fitted with top of the line components and golden solid state capacitors. It has a brown dual layer PCB and the electrical components along with PCH are cooled off by three separate heatsinks. The Z87 Extreme 4 comes with four DDR3 DIMM slots which support upto 32 GB of memory with rated speeds upto 2666 MHz+ O.C.

The Z87 Pro 3 which is a cut down version of the Extreme 4. It is listed for 699 which amounts to $110.99 US, the price would end up around $99.99 officially. It comes with only four phase and a single heatsink over them. The CPU is still fed power through an 8-Pin connector, the PCH sits beneath large heatsink. Expansion slots include a single PCI-e 3.0 x16 slot, three PCI-e 3.0 x1 and two PCI legacy slots.