Motherboard manufactures would be showcasing their latest motherboards based on Intel's new Z77 Chipset at the upcoming Cebit 2012 event, However details of a few Extreme and Fatal1ty series motherboards from ASRock have slipped on the online along with their pictures. 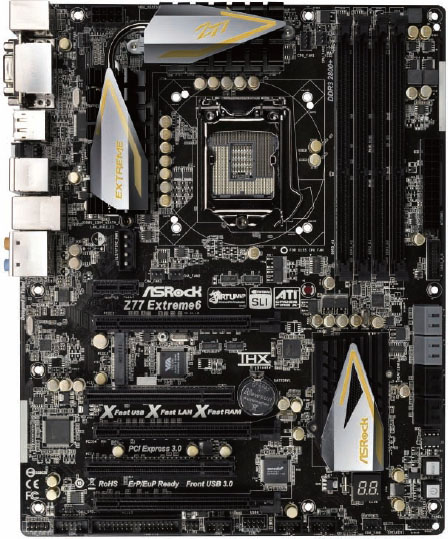 The Z77 Extreme6 would support Intel's 3rd Generation Ivy Bridge processors which would launch in the last week of April. The motherboard retains a Black/Gold color theme as seen on previous X79/Z68 models. The CPU would be powered through a 12 - Phase DIGIPower VRM and allows support for DDR3 Dual channel with frequencies upto 2800Mhz O.C.

Expansion slots include two PCI-e x 3.0 (x8/x8), A PCI-e 2.0 x16, 1 x PCI-e 2.0 x1 and a Mini PCI-e x1 slot, Two legacy PCI slots are also included, Pretty weird layout by ASRock - SLI/CrossfireX support are included. It would had been better if there were atleast three PCI-e 3.0 slots. Moving on we have four SATA 6 Gb/s, four SATA 3 Gb/s, and one eSATA 6 Gb/s storage connectors. A total of four USB 3.0 are located at the rear and two through front panel. I/O includes 8+2 channel HD audio (Realtek ALC898), FireWire, and one gigabit Ethernet (Broadcom BCM57781) while Display outputs include  DVI, D-Sub, HDMI, and DisplayPort. 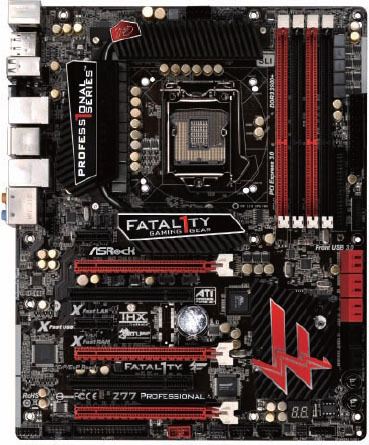 The ASRock Fatal1ty Professional would be a flagship part featuring a 20+ Phase  digital-PWM power circuitry design for the LGA1155 socket and 5-Phase VRM for the memory making it an ideal board for overclocking enthusiasts. Expansion slots include  two each of PCI-Express 3.0 x16 (x8/x8 when both populated), PCIe 2.0 x1, and legacy PCI; and one PCI-Express 2.0 x16 (electrical x4, wired to the PCH). An additional PCIe bridge chip has been added to acquired more PCI-e lanes.

Storage options include Six SATA 6GBps ports, four internal SATA 3 Gb/s, and eSATA. USB 3.0 connectors include four on the rear and two on the front end. Display connectors only include a mini display port and HDMI. 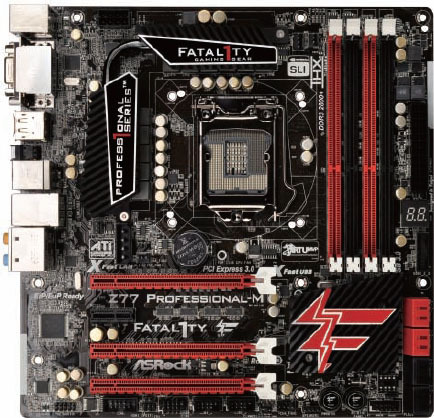 The Second board "Z77 Fatal1ty Professional-M" features a Micro-ATX Form factor design, CPU is provided juice through an 11 Phase DIGIPower VRM and 2+1 phase vrm for memory. Expansion slots include two PCI-Express 3.0 x16 (x8/x8 when both populated), one PCI-Express 2.0 x16 (electrical x4), and a PCIe x1. Storage options include two each of SATA 6 Gb/s, SATA 3 Gb/s, and eSATA 6 Gb/s. Same amount of USB 3.0 ports are allocated on the board while display outputs include DVI and D-Sub.