ASRock held a event in Taiwan to demonstrate their latest X99 motherboards where they also showcased their beastly, X99 Extreme 11 motherboard. For once, we thought that we have seen all the top-to-bottom X99 chip based lineup from ASRock but looks like ASRock has still got one more announcement to make regarding their flagship ASRock X99 Extreme 11 motherboard which should be available to consumers later next month. 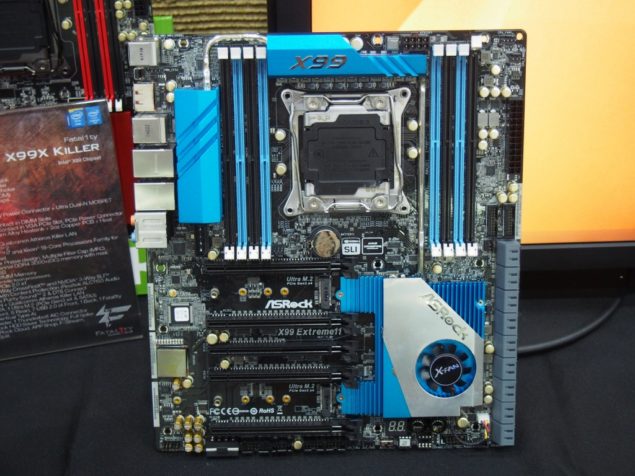 The ASRock X99 Extreme 11 is a monstrosity in terms of design and features. The motherboard features and E-ATX form factor which has become the standard size for the high-end X99 motherboards. But the amount of features on this motherboard are insane bringing it in the same tier as the X99S XPOWER and ROG Rampage V Extreme. The board is built on the same Super Alloy design from the rest of the ASRock X99 motherboards and features a 12 Phase VRM. The PCB is built on a high-quality design and components implementation which has the XXL aluminum alloy heatsinks featured across the board. It retains the blue and black color scheme with the heatpipe integration but the interesting thing about the board is that it also comes with the active fan cooling solution to cool down the extra storage and PCI-e controllers featured near the PCH. This heatsink is connected to the PWM cooling via a single heatpipe but its more denser.

Expansion slots include five PCI-e 3.0 x16 slots with enough spacing to support 4-Way SLI and CrossFire Multi-GPU functionality. There are two Ultra M.2 (PCIe Gen3 x4) slots which can support NGFF SSDs for additional storage. A few overclocking switches can be found at the bottom of the PCH heatsink along with a diagnostic LED. Since the motherboard has active cooling, it requires an additional 3-Pin connection to power the fan on the heatsink shroud. A 4-Pin PEG connector is seen near the USB 2.0 ports which offers additional power to the PCI-Express ports when using multiple add-on cards and graphics cards. There's another down the PWM heat sink. ASRock has retained their Purity Sound 2 design on the motherboard which is isolated on its separate PCB and indicated by a black line.

The I/O panel on the ASRock X99 Extreme 11 motherboard includes four USB 2.0, four USB 3.0, dual Gigabit Ethernet LAN ports, two e-SATA ports, a PS / 2 port, CMOS Reset switch and a 7.1 Channel audio jack. ASRock has not revealed the pricing of the motherboard but we can expect it to arrive in the retail market in the next few months for a price forward of $450 US.