ASRock has finally unleashed their X99 Extreme 11 motherboard which is their flagship monstrosity built for Intel's high-end desktop platform codenamed Haswell-E. The ASRock X99 Extreme 11 motherboard has been designed from the ground up to suit fit the needs of many hardcore enthusiasts and overclockers who want extreme overclocking performance and the best features available on Intel's X99 chipset based motherboards. 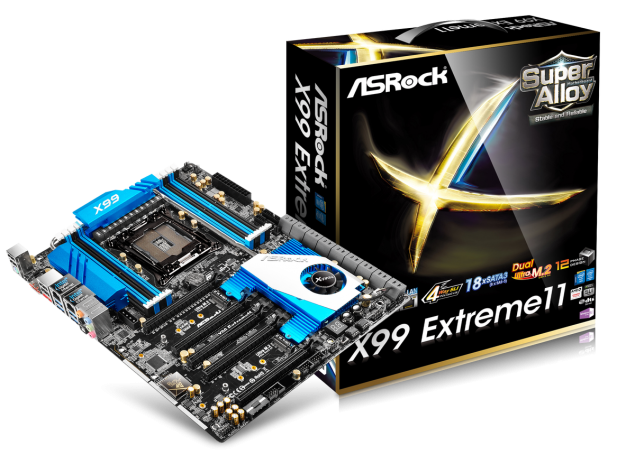 The ASRock X99 Extreme 11 is a monstrosity in terms of design and features. The motherboard features and E-ATX form factor which has become the standard size for the high-end X99 motherboards. But the amount of features on this motherboard are insane bringing it in the same tier as the X99S XPOWER and ROG Rampage V Extreme. The board is built on the same Super Alloy design from the rest of the ASRock X99 motherboards and features a 12 Phase VRM. The PCB is built on a high-quality design and components implementation which has the XXL aluminum alloy heatsinks featured across the board. It retains the blue and black color scheme with the heatpipe integration but the interesting thing about the board is that it also comes with the active fan cooling solution to cool down the extra storage and PCI-e controllers featured near the PCH. This heatsink is connected to the PWM cooling via a single heatpipe but its more denser.

Expansion slots include five PCI-e 3.0 x16 slots with enough spacing to support 4-Way SLI and CrossFire Multi-GPU functionality. There are two Ultra M.2 (PCIe Gen3 x4) slots which can support NGFF SSDs for additional storage. A few overclocking switches can be found at the bottom of the PCH heatsink along with a diagnostic LED. Since the motherboard has active cooling, it requires an additional 3-Pin connection to power the fan on the heatsink shroud. A 4-Pin PEG connector is seen near the USB 2.0 ports which offers additional power to the PCI-Express ports when using multiple add-on cards and graphics cards. There’s another down the PWM heat sink. ASRock has retained their Purity Sound 2 design on the motherboard which is isolated on its separate PCB and indicated by a black line.

The I/O panel on the ASRock X99 Extreme 11 motherboard includes four USB 2.0, four USB 3.0, dual Gigabit Ethernet LAN ports, two e-SATA ports, a PS / 2 port, CMOS Reset switch and a 7.1 Channel audio jack. ASRock has not revealed the pricing of the motherboard but we can expect it to arrive at a premium range around the $499 US mark given its specifications and design.

One thing that you can’t possibly miss on this monstrous motherboard is storage connectors! ASRock X99 Extreme11 boasts a total of 18 SATA3 connectors on the side of the motherboard, including 10 SATA3 6.0 Gb/s connectors from Intel X99 and 8 additional SAS-3 12.0 Gb/s connectors by the added LSI SAS 3008 controller chip. Tests at ASRock’s lab showed that the data transfer rate could reach an unbelievable 6.1 GB/s when SSDs were connected to the storage ports!

If you thought that that was the end of the storage options for the world’s most powerful X99 motherboard, then you’re dead wrong. There are also two more of the world’s fastest Ultra M.2 PCIe Gen3 x4 slots that can hit 2.8 GB/s with SSDs located between the PCIe slots too.

An insignificant yet crucial reason why ASRock X99 Extreme11 outperforms its nemeses is because ASRock’s X99 motherboards implement a luxurious 12 Power Phase Design while others have downgraded to merely 6 or 8 power phases. This special VRM design allows the motherboard to score better performance with less power and at cooler temperatures.

To claim greatness, one must walk the talk. Having sufficient PCIe slots for building 4-way SLI or CrossFireX is fair and square for any high-end platform. However it’s still not enough for the world’s most powerful X99 motherboard. ASRock X99 Extreme11 has five PCIe Gen3 x16 slots plus two embedded PLX PEX 8747 bridge chips for enabling either 4-way SLI or CrossFireX at x16/16/16/16 full throttle!

ASRock X99 Extreme11 is the flagship of ASRock’s Super Alloy Series. It can be powered by Intel® Core™ i7 and Xeon® 18 Core Processers (LGA 2011-3). Besides the aforementioned merits, this motherboard is also geared with XXL Aluminum Alloy Heatsinks, 12 Power Phase Design, Nichicon 12K Platinum Caps, Premium 60A Power Chokes, Premium Memory Alloy Chokes, and Ultra Dual-N MOSFETs. The most effective VRM solution for generating beastlike performances while maintaining low power consumption and low temperatures. Other features include dual Intel Gigabit LAN with support for Teaming, the eargasmic Purity Sound 2 plus Nichicon Fine Gold Series Audio capacitor combo. And how could anyone possibly forget the DDR4 memory upgrade on X99 systems? This motherboard comes with 8 memory DIMM slots that may support DDR4 quad channel ECC and UDIMM/RDIMM memory modules up to 3400+(OC). Seriously, there might be 99 ways to be extreme, but nothing gets more extreme than X99 Extreme11! 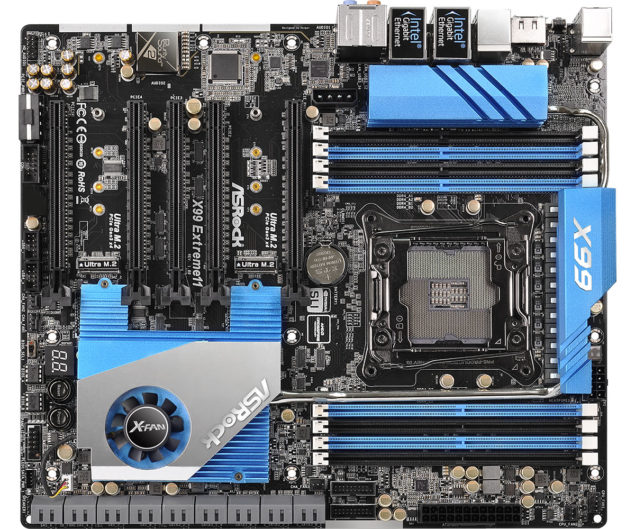 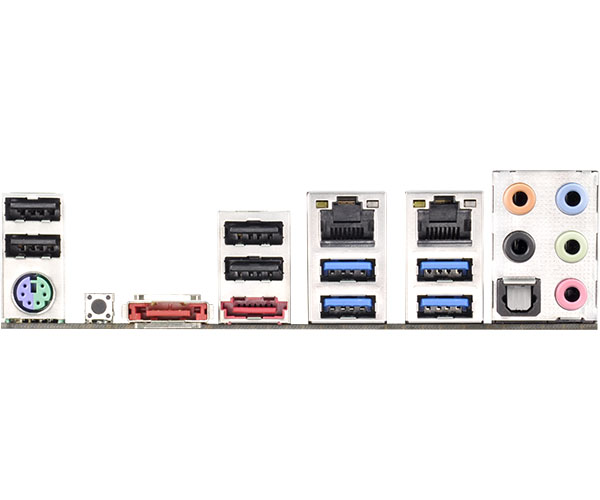 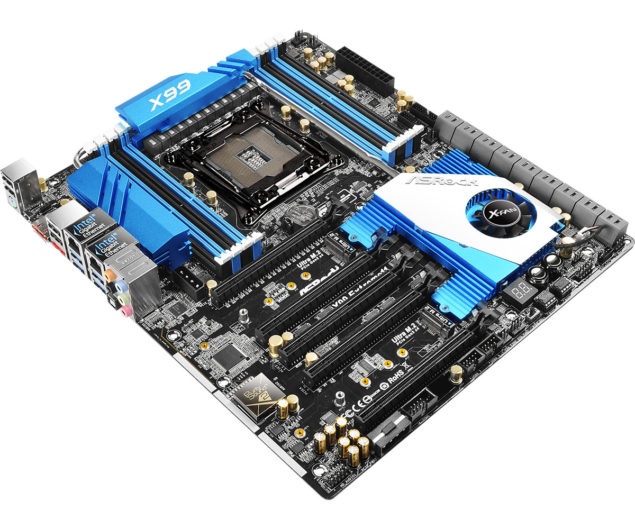