Non-K Skylake CPU's can be overclocked, though only through BCLK adjusments. It's a fine way to get a little extra performance out of your non-K Skylake CPU. ASRock just released their own utility that'll allow for easy adjustments of the BCLK, the SKY OC. 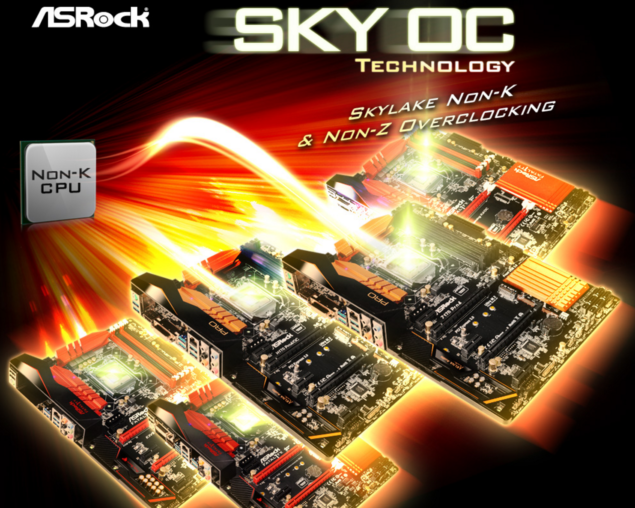 SKY OC is ASRock's solution to BCLK overclocking. Capable of 60% increase in clock-speeds for non-K Skylake.

In their own tests, ASRock has seen a 60% increase in clock-speeds on an i5-6400 installed in their Z170 Pro4, just by increasing the BCLK. That's not insignificant by any means, and since the underlying architecture is the same, non-K i5's only missing an unlocked multiplier. There have apparently been some stock shotages, according to ASRock, on K based Skylakes, so this could be a suitable alternative if you find yourself unable to find one.

If you decide to overclock this way, the iGPU will be disabled and the turbo and any other C-states will be disabled. So you'll be locked at that frequency and you won't be able to put your PC into a deeper C-state. Small tradeoff's for some decent performance gains.

SKY OC is only available on Z170 based motherboards. Below is a table of what motherboards are compatible and what BIOS you'll need to be running.