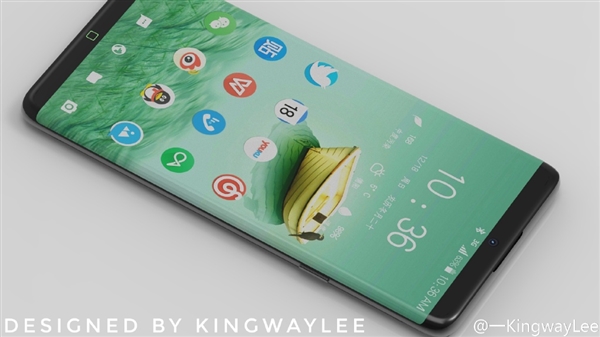 The Samsung Galaxy S8 will soon be with us. The device has seen a plethora of leaks so far. An edge to edge screen, a virtual home button, a dual camera and an iris scanner are all features which have surfaced regularly. However, when it comes to visual information, we've seen nothing surface so far. Still, all the information which has leaked so far does provide an effective guideline of what to expect. A designer has made some renders which look very close on what might come next year. Take a look below for more.

Courtesy of the rumor mill, very few features remain a secret for flagship devices prior to launch. Both the iPhone and the Galaxy S lineup have seen this trend occur consistently over the past couple of years. Now, things have accelerated even more with information surfacing months before prior launches. In fact, so many details have leaked that it's possible to form accurate renders based on this information.

Designer Kingway Lee has done just that and you can take a look at the fruit of his labor below. True to form, the Galaxy S8 features an edge to edge screen, with remarkably thin bottom bezels in the images. The device in them is also remarkably thin, though a bit too flat for Samsung's taste. The screen, combined with the thin bottom and top bezels lends the Galaxy S8 a very 2D look, which we doubt will appear on the device. There's also another feature which doesn't match current rumors.

Take a look at the bottom of the device and you'll see the USB Type-C port and the removal of the 3.5mm earphone jack. take a look at the back and you'll see only one camera sensor. Samsung's rumored to equip the Galaxy S8 with a dual camera system and an iris scanner, so these renders get one critical detail wrong. At the front of the device, there's no indication of an iris scanner either. Looks like Lee was focused towards the overall aesthetics a bit more than he should have been.

All in all, it's a nice take on the Galaxy S8. Given that there's absolutely zero visual information on the device available right now, we'll take all that we can get. It isn't long until Samsung launches the device. The Korean tech gian'ts going to need a very successful launch if it wants to even slightly counter the Note 7's failures. By the looks of things, the S8 just might do that. Thoughts? Let us know what you think in the comments section below and stay tuned for the latest.