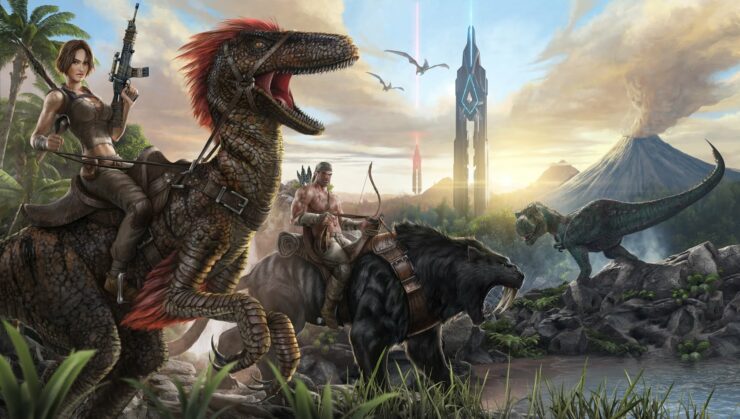 During an Ark Twitch Steam with Studio Wildcard’s Jeremy Stieglitz, it was revealed that Ark Survival Evolved PS4 is currently in the submission process, and will likely release early December. In addition, it was confirmed that a PS4 Pro update is on its way as well.

The Twitch stream included some rather interesting details about Ark on PS4 and PS4 Pro, which were summarized by Reddit user “Steel_Cub”.

The launch of Ark on PS4 will be digital only, but a physical version will be released later on. Performance wise, the base PS4 version of Ark Survival Evolved will be on par with the Xbox One version, and will use the same client version. Both versions should be updated simultaneously in the future. Like the Xbox One version, the PS4 version will feature split-screen couch co-op. Unfortunately, there won’t be cross-platform play at launch, but Studio Wildcard said it would be possible. Additionally, it was revealed that there won’t be PSVR support, but the studio might be looking at it in the future.

Ark won’t support mods on PS4 at launch, but more details on this matter will be released alongside Ark’s official PS4 release announcement

It appears that Ark will also take advantage of the PS4 Pro, and will feature a higher framerate and resolution than the base PS4 version. Judging from the footage in the stream, Ark is hitting 40-60fps on PS4 Pro with no drops below 30 frames per second. As noted in the Stream, Studio Wildcard is still working on optimizing the game on Sony’s enhanced console.

Trophies are coming to Ark on PS4 at launch, and they will also be arriving on Xbox One soon. Another feature that will be arriving on both consoles, are Procedurally Generated ARKs. These maps will arrive for PS4 and Xbox One by the end of this year.

The upcoming total conversion for Ark, “Ark: Primal Survival”, is still in the works, but the Scorched Earth expansion will release on the same day as Survival Evolved on PS4. It’s not sure whether the expansion will be offered for free with the main game.

Ark Survival Evolved is available through early-access on Xbox One and PC.