Say Goodbye To The Note Edge; Apple’s Latest Patent Wraps The Screen Around The iPhone

As Apple gets done with WWDC, all eyes are once again on September, when Cupertino is expected to launch both the iPhone 7 and the iPhone 7 Plus. Software and services were expected to get a more serious focus this time around and we saw several major announcements being made yesterday. Siri and Apple Pay both made it to the desktop and Apple also made some serious overhauls to iMessage, in order to make its native app more competitive with the likes of Messenger, WhatsApp, Snapchat and the Chinese WeChat. Today, an interesting Apple patent has surfaced which might hint towards the future direction the company will tke with the iPhone.

Say whatever you want to about Samsung; the Korean tech giant's curved screen for both its flagship smartphone and phablet won it quite a bit of users. While its rare to see unique changes on mobile gadgets surface from the East, the Edge variants of the Galaxy S lineup won Samsung quite a bit of followers and we're expecting the Galaxy Note 7 to further refine the approach later this year.

Talking about curving screens, the USPTO granted Apple a rather interesting patent this Tuesday that could take the screen all around an iPhone. Such an approach could drastically change the way you attract with an iPhone, and make the need of physical volume buttons quite unnecessary. We've seen similar patents in the past as well, that show the iPhone with capacitive buttons as well, so once Apple gets done with the iPhone 7 and the iPhone 7 Plus this year, perhaps some interesting changes will be introduced on its flagship smartphone lineup next year. 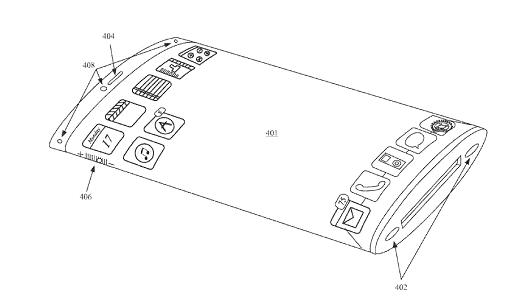 According to the filing, not only will this increase the icons in one row on the screen to five, but it'll also completely eliminate the physical volume buttons and replace them with a feature on the screen. This should also give the iPhone much more screen room and even the slightest screen size increases will come with the ability to display a lot of content.

It'll also give more options with the rear of the device, which generally serves a rather uninteresting approach of simply housing the camera sensor and other assortments for the iPhone. To implement this change Apple will have to make the much overdue jump to OLED on the iPhone, which sounds plausible given Foxconn's recent developments with SHARP. However before you get all excited, such a technology shouldn't be available for manufacturing on a mass scale for some time, possibly years, so we'll be sticking with resolution upgrades for the iPhone right now. Thoughts? Let us know what you think in the comments section below and stay tuned for the latest.