The Apple Watch, according to some users, is not really a fashion accessory. However, Apple compensated this fact with the introduction of a few interchangeable Watch bands. The Watch bands are made up of different materials ranging from leather to stainless steel alloy which are available in two sizes for both variants of the Apple Watch - 38mm and 42mm. However, the band for latter of the two might not be big enough for some users and Apple has taken note of it.

For users with wrists big enough not to be able to fit in the Apple Watch, Apple has launched a Link Bracelet kit and two new variants of the Sport band. Users can use these to extend the band size so the Apple Watch can fit users with bigger wrists.

Let's jump down to the details.

The Sport band is extremely comfortable and is made from fluoroelastomer which is great to the touch. For those who feel their wrists are way bigger for the Apple Watch, the Cupertino giant has launched two different sizes of the Sports band, L and XL - large and extra large. This include bands that can be designated to fit either S/M or M/L, or it can be configured for wrists sizing M/L or L/XL. The larger band would fit wrists with size ranging from 195-245mm. The L/XL Sport band is available for a mere $49. You can buy them if you're a fan of Apple's Sport and and you have wrists larger than 195mm. 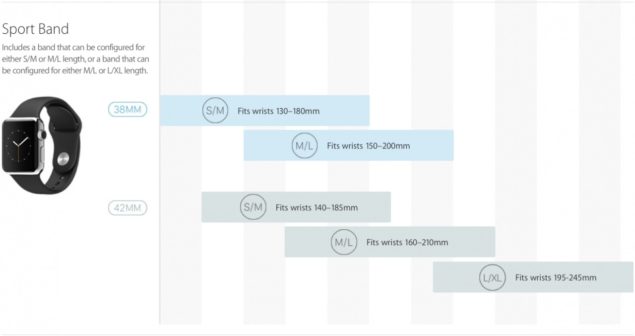 The next in line for Apple's band launch for bigger wrists is the Link Bracelet kit. As we all know that the Link Bracelet is crafted from the stainless steel alloy, these links can be added or removed according to a user's wrist size via a simple release button located on the inner side of the link itself. Don't worry, no tools are required to add or remove links. Apple has launched a pack of six external stainless steel alloy links which can be used to extend the size of the link bracelet to more than 205mm. Apple Watch users with Link Bracelets can use these external links to increase the band size for bigger wrists. The Link Bracelet kit can be purchased for $49.

If you guys are a big fan of the Apple Watch but your wrists are too big to fit inside the standard bands then Apple has launched the solution. Apart from this, Apple has also launched a 38mm Modern Buckle which is now available to purchase separately.

Personally, I would prefer a Milanese Loop for the Apple Watch. Which band do you guys like the most?