If Apple TV 4 Looks Like This Then We’re Definitely Buying! – Concept Images

Up until now, there hasn't been an image leak of the Apple TV 4 thus far, but concept designers are constantly busy churning out great visuals of what the device could look like once revealed to the world come the big event day. 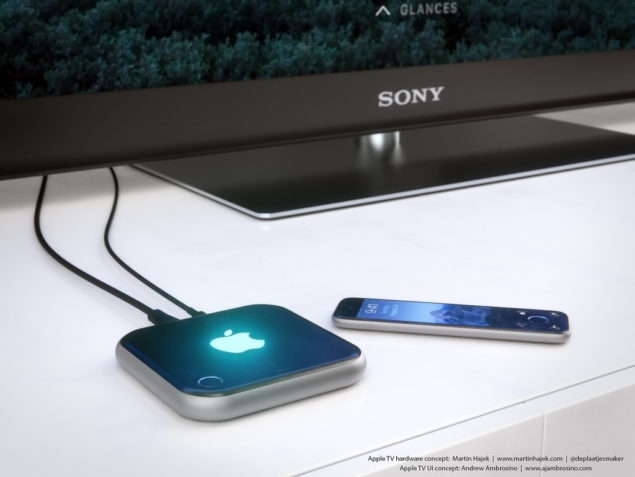 Resident graphic designer Martin Hajek has once again tossed his coins into the jar and has come up with a beautiful concept of a potential Apple TV 4 candidate. And as you can see from the images below, it looks absolutely gorgeous, and we would definitely throw in our money to buy one!

The above Apple TV 4 concept takes heavy inspiration from the iPhone 6 in terms of design. But that's not where the greatness of the concept ends, the designer even went a mile ahead and gave the Apple TV 4 remote dual sided displays, and when flipped over, the accessory even doubles down as a gaming remote.

On the UI front, the designer imagines a brand new interface, which is based on the work of Andrew Ambrosino. But given the concept Hajek has conjured up, it's a clear sign that the designer has focussed more on the design bit than anything else, and we have to admit, it looks absolutely stunning hands down.

The designer even had the foresight to toss in a glowing Apple logo as well, because, why not, right?

The Apple TV 4 is all set for announcement tomorrow at Apple's big event, which will also see the      likes of the iPhone 6s, iPad Pro and iPad mini 4 being announced on stage. The company's new set-top box is rumored to be strictly focussed on the gaming end, with the Cupertino aiming to target the casual gamer with its new hardware.

The Apple TV 4 is said to be powered by the A8 chip, the one found in the iPhone 6 and iPhone 6 Plus. And on the design front, as we mentioned before, not much is known, except for the fact that it will be larger than the current third-gen Apple TV model which the company sells in the market.

We'll be keeping a close eye on the Apple TV 4 and will bring to our readers all the leaked and officially announced details as soon as we get our hands on them. Till then, sit tight, and be sure to let us know in the comments section below what you guys think about today's concept render.

- Apple TV 4: Everything We Know So Far – Roundup