Apple made a couple of big announcements at WWDC this year. Most of these related to OX X 'El Capitan' and iOS 9, both of which will be coming with a host of new features that will improve user interaction greatly. But WWDC wasn't all about iOS and OS. It also came with some other announcements that include an all new Music service, coupled with improvements and upgrades for the Apple Watch. But one of today's most surprising announcements was about Swift. Apple now plans to make its programming language open source, with Linux based source code coming later this year. 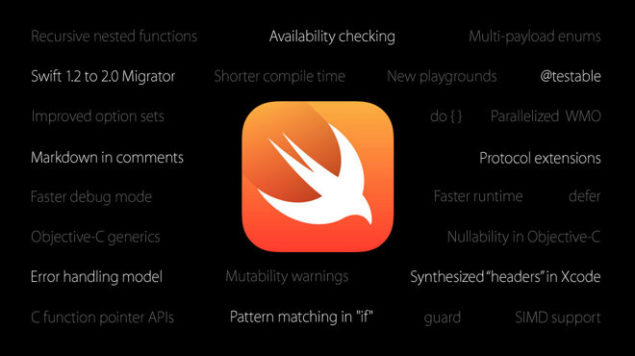 Apple intends to make several changes to its language this year, with new features being announced for an upgraded Swift 2. Swift's new features will now include synthesized headers for X-Code, Markdown in comments and pattern matching in if. This will be coupled with faster run times and decreased compiler times to improve performance and overall data fetching speeds. Swift's compiler and standard libraries will be open sourced as well. An improved error handling model and protocol extensions will also be introduced in today's revamped Swift 2.

While Apple didn't go into much details with respect to changes expected in Swift, the Cupertino giant choosing to make its programming language open sourced is big news for anyone who has been following tech news for some time. Apple's been known for playing things quite closely to the chest and will provide developers with a lot of ways to make things work in much more creative ways. It has grown in popularity ever since Apple launched Swift last year and Cupertino seems to be quite serious as well. Stay tuned and let us know what you think in the comments section below.