If you're in the ownership of an iPhone 5s or an older device, then you'll start to notice something strange on the App Store - Apple is pushing popups to users, prompting them to upgrade to the latest and greatest flagship, the iPhone 6s.

While we do understand that having the latest and greatest piece of technology is the way to go, but a lot of users are more than content with what they have currently, be it an iPhone 5s or any older iPhone or smartphone for that matter. So keeping that in light, pushing popups through the App Store to upgrade is somewhat absurd, and there should be a way to opt out of the whole thing. After all, you came to the App Store to download an app, or fire off a few updates, not to be slapped with an ad asking you to upgrade to a new smartphone.

The ad, which you can see below, features the iPhone 6s itself, with the tagline 'Ridiculously Powerful.' Once you tap on the 'Upgrade now' button, you'll be taken straight to the Apple Store app, so you can buy the iPhone 6s straight away. It's also worth mentioning here that the code for these popups come as part and parcel of the iOS 9.2 update, hence if you're on an older version of Cupertino's mobile operating system then you're absolutely golden and won't see these popups. 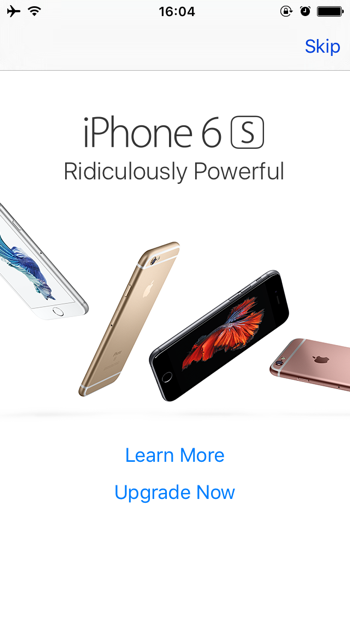 We're quite certain that there will be a backlash from the older iPhone community regarding these popups. After all, they're annoying and if a user is content with the device they have at hand, then annoyance levels are taken to a whole new extreme.

There's no doubt that the iPhone 6s and iPhone 6s Plus are both mighty powerful handsets. This time around Apple saw it fit to bump up the RAM count to 2GB, significantly enhancing the fluidity of iOS on a smartphone level. To top things off, Apple implemented a 12-megapixel rear facing iSight camera, allowing users to shoot photos in a much more sharper resolution that before, and of course, allow everyone to reel in videos in 4K.

While we do suggest users to upgrade to the latest tech from Apple, but if an older smartphone in your pocket is getting the job done, then there's no need to go overboard with things whatsoever. Now please, Apple, remove these popups from the App Store.