Is Apple’s Privacy As Private As It Claims It To Be?

Apple prides itself when it comes to customer data privacy and security, and takes subtle jabs at Google when the topic is discussed at different forums. But the big question on everyone's mind is: are Apple's privacy claims as private as the company claims them to be? With a new report just published recently, it appears as though Apple might have access to your private data after all, but not in the way other companies do.

A Walled Garden With Certain Exceptions?

See, with the announcement of iOS 9, Apple also took the liberty to take the wraps off its new assistant which it calls 'Proactive.' It learns from your usage habits and throws suggestions at you during the entire day span. Things like suggesting to call a certain contact during a specific time of the day, or play music automatically when you're coming back from work, all is taken care of by the new proactive assistant that lives in iOS 9. The thing here is, Apple claims that it does not send off your data back to its servers, neither does it sell it off to third-parties, but it has to send off data back to its headquarters if it wants to improve the user experience of its services.

Here's Apple's very own literature on that for the matter:

When we do ask to use your data, it’s to provide you with a better user experience.

Long story short, Apple needs to learn a little about you to make things as personal for you as possible. But the company has clarified a few things very strictly regarding this matter - your data always remains anonymous, nothing is affiliated with your Apple ID, everything is randomized, the data is not linked to other Apple services, it's not shared with third-parties and the company claims that you're in total control. In other words - Apple doesn't know that a particular set of data belongs to a particular person. 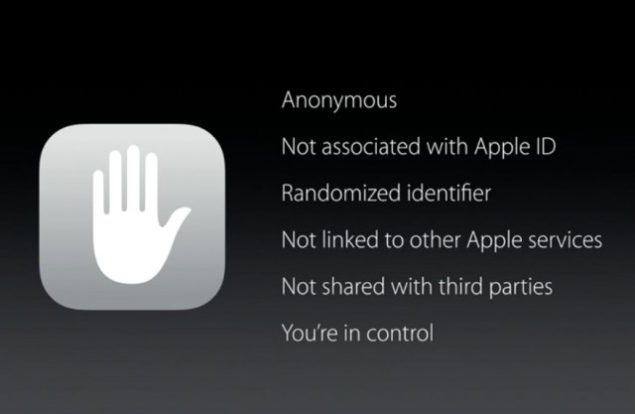 Whilst consumer data is anonymised, and not associated with an Apple ID when it’s sent, this doesn’t mean nothing happens at HQ once its left the device. How else can Apple provide its consumers with a top end experience with no feedback loop on real world usage?

It's very clever how Apple has access to your data, but unlike Google, don't expect to send off an email to someone regarding football and expect to see an ad about it while browsing a website. Apple does not work like that, but it makes us think - is Apple twisting the lines when it comes to privacy? On paper, it wants us to believe that we're absolutely secure behind a privacy firewall.

But what do our readers think about the whole thing? Are Apple's privacy claims as solid as the company claims them to be? Share all your thoughts and opinions in the comments section below.