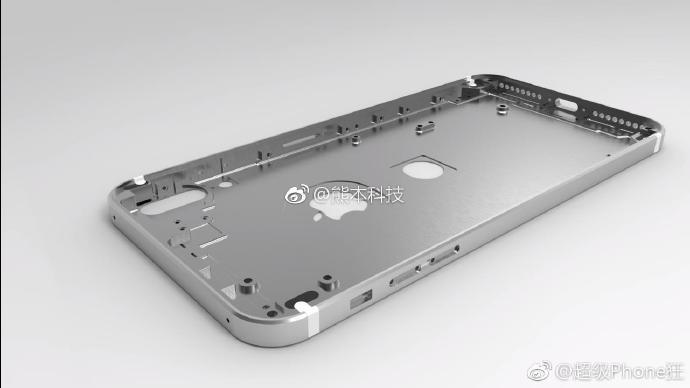 Given that there's still a lot of time left until Apple launches the iPhone 8, the company's testing a lot of prototypes. One of these, with a rear fingerprint sensor is the feature of a lot of leaks lately. According to these, Apple will follow in Samsung's footsteps this year and introduce the iPhone 8 with a rear fingerprint sensor as well. Samsung's reason for the move is that Syaptics simply did not have the technology ready at the time of the S8's launch. Now, Apple's also testing the possibility of a similar move. Looks like Synaptics' still having problems with the technology. Today, we've got some more details on the concept. Take a look below to find out more.

The iPhone 8, despite a good five months left until its launch, is a regular feature of the rumor mill. The smartphone, like the iPod before it, constitutes a majority of Cupertino's revenues and it's a dire need for Apple to stay ahead of the pack when manufacturing its smartphone. However, it's dropped the ball with the smartphone over the past couple of years. Not only has design taken a backseat, but the only new features that we get are forced as a reply to Apple's competitors.

This year, the rumored iPhone 8 is expected to bring Apple back into the game. Firstly, the device is rumored with the very important OLED upgrade. Apple's lack of adequate supply chain resources have left the company embarrassingly behind in this critical display upgrade. The smartphone is also rumored to feature a virtual fingerprint sensor, just like the Galaxy S8 and Galaxy S8+ had been rumored to prior to their launch.

Today's alleged shell images for the iPhone 8 surface straight out of China. They're based on the schematics for the device that have leaked earlier. The shell in itself looks very unorthodox. The iPhone's back is generally very smooth, with Apple's love of minimalism being at its strongest. Now that there's  a fingerprint sensor right at the center, this breaks the previous approach on the lineup's design. At least Apple's more thoughtful and has placed the sensor at the center of the iPhone, rather than at the top like the Galaxy S8. This will make using the device much easier, especially for one-handed use.

Other changes in addition to the rear fingerprint sensor is the dual camera sensor arrangement. Apple debuted the feature on the iPhone lineup with the iPhone 7 Plus last year. Now, with the iPhone 8, we'll see the sensors arranged vertically, rather than horizontally. If these images are accurate, then Apple must have a really good reason to make the change. However, such a sensor arrangement makes us doubt the authenticity of today's images. Vertical sensors simply don't make sense. Take it with a grain of salt and let us know what you think in the comments section below. We'll keep you updated on the latest.