Despite trying to keep the design on its iPhones as simple as possible, Apple's still had to make 'some' concessions over the past couple of years. If you take a look at your iPhone 6 or 6 Plus, you'll see that it follows a uniform color tone and materials, which is a change from its predecessor, the iPhone 5S. But smartphones are after all meant to communicate wirelessly and Apple has had to make accommodations for an antenna on its flagship device, that breaks from the overall uniformity of design. However, it seems like things might be changing for upcoming iPhones, as an all new Apple patent has been discovered that should allow the Cupertino manufacturer to change the way things looks on its top smartphone. 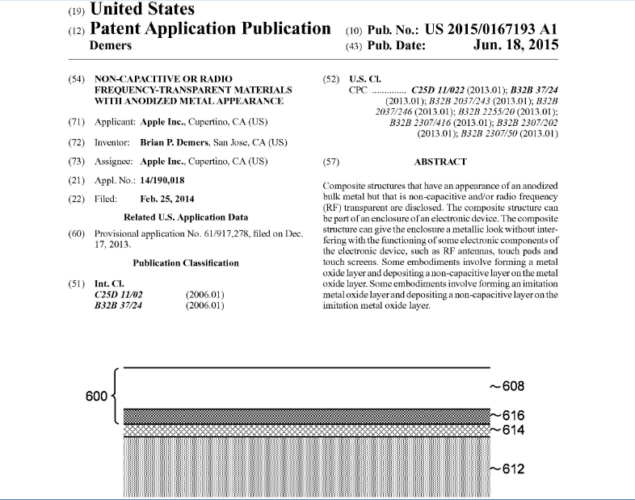 Apple seems to be hard at work at solving the pesky iPhone antenna problem. A new patent released by the USPTO a couple of days back highlights the company's plans for capacitive radio frequency transparent materials that bear a similar resemblance to anodized aluminum. In layman's terms, Apple's hard at work looking at new materials that will conduct radio waves and bear a similar resemblance to the iPhone's anodized aluminum as well. According to the patent's abstract:

While it should be clear that patents are in no way any guarantee of the technology bearing fruit, but its interesting to note Apple's looking at all possible angles to improve its devices. Antenna problems have a special place in iPhone history, with some notorious problems that surfaced with the iPhone 4. So the company needs to take careful steps this time around. Stay tuned, we'll keep you updated. And let us know what you think in the comments section.