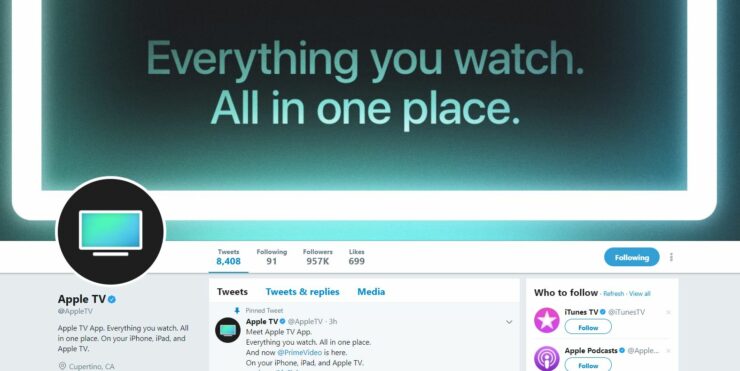 Amazon Prime Video launched on the Apple TV Today and with that Apple is reshaping its existing iTunes Movies account. The company is gradually increasing its Twitter presence with a dedicated new Apple TV account on Twitter which will cater everything related to the Apple TV. The first tweet from the company promotes the TV App and the Amazon Prime Video support. Previous tweets from the company are still existing deep within the account and you can still dig them up. So let's dive in to see some more details on Apple's new rebranded Twitter account catering the Apple TV.

As we have mentioned earlier, the company has not basically made a new Twitter account, instead, it is rebranding the @ITunesMovies account with a new @AppleTV handle. Even though the account is rebranded as the Apple TV, it does not seem to feature the hardware details of the set-top box. Instead, the company is focusing on the services that it is and will be providing in the times to come.

The TV app is present on the Apple TV as well as the iPhone and iPad. But the company does not seem to state it as the TV app. The company is referring to it as the Apple TV app. Apart from this, Apple has also promoted the Amazon Prime Video on the Apple TV (third-gen and higher). The app has integrated with the Apple TV's TV app. Furthermore, the new account also highlights the Live Sports feature which is set to arrive this week on iOS 11.2.

Meet Apple TV App.
Everything you watch. All in one place.
And now @PrimeVideo is here.
On your iPhone, iPad, and Apple TV.https://t.co/t8HrwrXyqT pic.twitter.com/RRWdHDJT0L

The Live Sports integration will allow individuals to keep track of their favorite teams, score, timing and a lot more. The games will be live broadcasted from ESPN. There is also an option available to hide the score as well. At your will, you can also allow the platform to send you alerts for the close games. This will allow you to switch them as they take place. There is also a new Sports tab that shows the most recent updates in sports categories.

We are still waiting to get our hands on the News integration in the TV app for iPhone, iPad and the Apple TV. Apart from this, Apple will also expand the functionality to other parts of the world as well. We will update you guys as soon as there is something more to the story.

This is all for now, folks. Share your views in the comments.