The saddening terrorism attack that took place recently left the business world in a hearkbroken state. Organizations from around the world are showing their outpouring support to commemorate the victims of the Paris attacks. Business organizations ranging from taxi services to giant tech industries are disturbed by the Paris event that took place overnight. 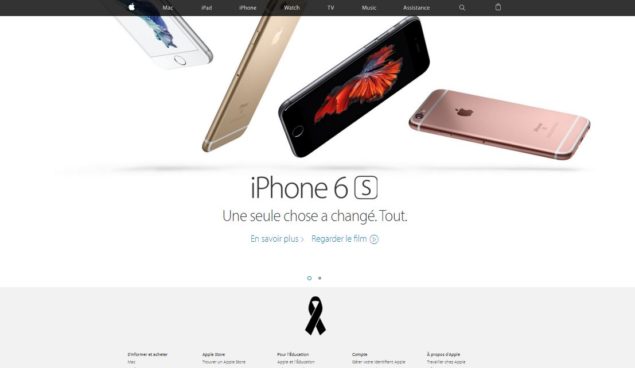 Likewise, Apple is also showing support for the deceased and victims of the attack in Paris. The Cupertino giant has added a black ribbon on the French homepage of their official website to honor and commemorate the victims who became part of an event that shook the world. Apple's black ribbon on their French homepage contemplates reminiscence and grief for our humanitarian brothers.

Let's see some more details about the Paris terrorist attack and what impact did it have on Apple and the remaining tech industry.

Apple Calls French Employees To Check For Their Safety

The Paris terrorist attack calls for the promotion of unity and solidarity between nations. It has been less than a year since the Charlie Hebdo newspaper offices as well as the Kosher supermarket in Paris faced terrorist attacks. The terrorists strike Paris once again in less than a year. Putting an additional amount of grief over the French nation. Apple has undertaken further considerations for the safety of its foreign employees who were residing in Paris.

After the inhumane event that took place, Apple has been contacting its affected employees in the French retail stores. Apple checked in on its foreign employees for the safety of their workers. Not only Apple but a lot of other tech companies have contacted their foreign associates, colleagues and employees for safety concerns.

Apple calling all employees in France to check they are safe…

Furthermore, Apple's CEO, Tim Cook also manifested remorse for the victims of the Paris attack in the following words. It's good to see that various tech giants stand up and portray unity among different nations of the world.

Prayers for Paris, the victims and their loved ones. Nous sommes tous Parisiens.

It's a sad event for the all the nations of the world, while France is reeling once again. Here's a link to Apple's French homepage of its official website, showcasing a black ribbon at the very end, www.apple.com/fr/. Google's homepage also shows the symbol reflecting mourning and remembrance of the victims of the Paris attack.

This is it for now, folks. For more news and guides, stay tuned. As for now, share your thought and insights about the matter in the comments section below.