Apollo Lake processors from Intel have officially been announced, suggesting that the leading manufacturer of desktop, laptop and server processors is highly keen on powering up a multitude of mobile machines ranging from notebooks, tablets, and of course the highly popular 2-in-1 hybrids. 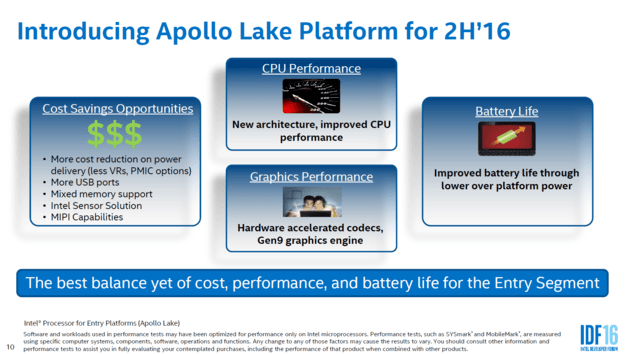 During the Intel Developer Forum (IDF) that was held this week in China, the processor manufacturing giant showcased its Apollo Lake chip lineup, which would eventually succeed the Braswell family. With the introduction of the new family, the upcoming chips will replace the Airmont based Braswell processors and thanks to the 14nm Goldmont architecture, improvement in Instructions per cycle (IPC) performance and Gen9 graphics are thoroughly expected.

According to the company, the Apollo Lake lineup will feature processors sporting dual-cores and quad-cores with an extremely energy efficient metric of 6W, going up to 10W. These processors will be available in a BGA packaging, meaning that they will come permanently integrated onto their motherboards before being sold. Since they will be present inside mobile devices and machines that feature a low-price tag, their processing performance will no doubt be inferior to the more advanced 14nm Skylake processor lineup.

However, high-end tablets are expected to get a nice little bump in the form of a performance upgrade because the new Goldmont architecture is expected to be present in slates, which a clock speeds going upwards to as much as 2.7GHz. With the core selling point of these chips being efficiency, Intel will be intending to sell the processors to OEMs who want to roll out more portable products in the foreseeable future. This would mean that while mobile devices and machines will have smaller battery capacities incorporated inside of their housing, the improved architecture will compensate for this trade-off, while the overall thickness of such products can be reduced substantially.

According to the reference design details present on Computerbase, 4GB LPDDR3 memory running at a frequency of 1866MHz will be a part of the package, but thanks to Apollo Lake, manufacturers will have more flexibility in choosing which type of memory can be running inside the machine. This is because the platform will also be able be able to support both LPDDR4 and DDR3L memory, along with internal memory supporting the eMMC standard and the M.2 specification for compact SSDs.

Furthermore, perhaps one change that we could have seen coming was the incorporation of a Type-C USB port. Not only is this particular interface able to accept charging cables being inserted in an irreversible position, but it can also draw power up to a 100 watts and transfer data up to 10Gbps, which is twice the speed limit of USB 3.0. As for when these chips will arrive and which category of products will be featuring them, Apollo Lake chips are expected to arrive during Q2, 2016 and are expected to be present in the following:

It appears that future Windows 10 running slates are going to be running the Apollo Lake processor family, along with a multitude of other products. Which other devices and machines do you expect will be incorporated with such chips? Let us know your thoughts right away.