Download And Install Android 5.1 For HTC One M9 Right Here

Android 5.1 has started to roll out to a lot of devices recently and many users have already started to enjoy the update on their handsets. Users of the Samsung Galaxy S6 and the Galaxy S5 have received their updates on select carriers over the past couple of weeks, and looks like another 2015 flagship is about to join that list. Android 5.1 for the HTC One M9 seems to be almost ready, with Custom ROM based Android 5.1 already available for the device to download. 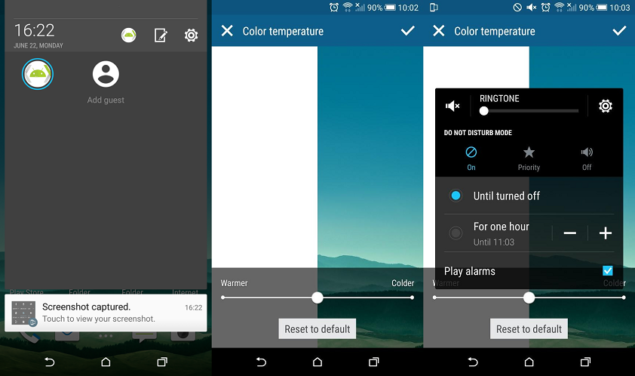 While HTC hasn't started to roll out Android 5.1 for the One One M9, we've managed to get our hands on a custom firmware for the device developed by LlabtooFeR. Before you head over to the download link below, it would be relevant to see what changes can be expected. Android 5.1 for the HTC One M9 features primarily some battery performance upgrades, introduction for multiple users on the One M9 and a couple of color controls.

Other changes on Android 5.1 for the HTC One M9 include some UI upgrades and an all new look for the volume slider, that can be seen in the image above. Sense 7 also gets some new animations with quick access to Do Not Disturbed mode as well. There are a couple of things that you're going to keep in mind before downloading the firmware below as well. Given that this ROM is custom made, you're going to need custom recovery installed on the device alongside an unlocked bootloader. You're also going to need to enable S-OFF on your One M9.

To enable S-OFF on your One M9, you're going to need to gain root access after unlocking the device's bootloader and then use Sunshine v3.1. You can download Sunshine here. So download Android 5.1 for your One M9 if you can't wait for Google's next update and let us know how it went in the comments section below. Since Custom Android 5.1 for the One M9 is already out, we should expect Android 5.1 to start rolling out for the HTC One M9 soon enough as well. Stay tuned for the latest updates.

Android 5.1 For One M9 By LlabtooFeR.

Here Are Five Secret Windows 11 Hotkeys for You to Try