AMD's first Water Cooling Set for its upcoming Bulldozer FX Processors has been exposed. The four leaked shots of the set show Packaging and a detailed look at the Water Cooling set.

It was revealed a few months ago that AMD might consider shipping stock liquid cooling solutions with its High End FX 8Core Bulldozer lineup (Details here). Looks like the reports were true, The Kit is shipped individually inside a huge carton packaging bearing the AMD FX Unlocked Logo. Side of the packaging lists some key features of the Kit: 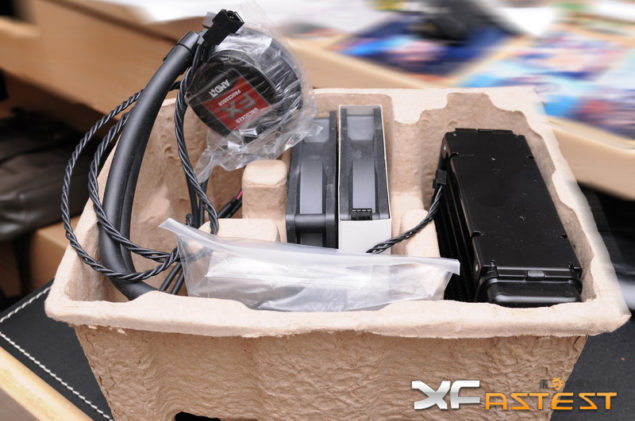 Various parts of the Liquid Cooling kit is fit inside parts of the carton box. These includes heatsink and liquid transfer tubes, 2 x 120mm fans, Water Cooling Head and the Radiator. The kit seems alot similar to OEM's Antec "Antec 920" which may hint that the kit has also been manufacturer by Antec. So far the results, availability and pricing are unknown but they are rumored to be shipped with the AMD FX Review kits which we detailed a few days earlier:

AMD isn't the only one considering Liquid Cooling Solutions for its high end Processors, Intel is also aiming for Water Cooled kits for its own Sandy Bridge-E lineup which would be sold separately. The kit (RTS2011LC CPU Water Cooler) was demonstrated and revealed at this years IDF event, Link below: