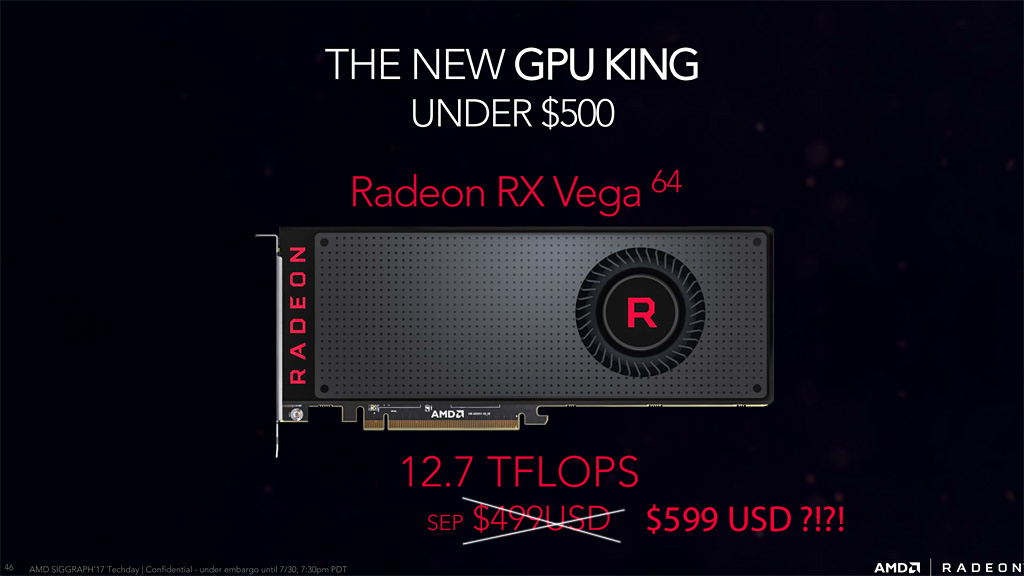 Was the cake a lie? No RX Vega 64 standalone garphics card is available for under $500.

AMD has posted the official statement on the RX Vega pricing issue and its not very encouoraging. Instead of allaying fears that the the standalone cards will be perpetually out of stock due to limited quantities and miners snatching them right up, the company has simply reiterated that they are doing their best to stock the entire lineup inlcuding the packs (which were never out of stock in the first place!). Even at the time of writing, you can still buy Radeon Packs but no standalone vega.

Before we go any further, here is the official reply:

So what is the problem then? Well, here is the thing. The RX Vega Black Pack includes 2 games for free along with the standalone card. Considering the games are really not free (a $100 differential does not equate to free games) and that there is no choice between the titles, this is basically the company forcing users to buy the Radeon Packs once the limited supply of the standalaone RX Vega runs out. The supply of the standalone card was so low, that Amazon did not even bother to list the card at all and it ran out of stock within minutes of the original launch.

It is certain that even if AMD restocks the retailers, there will never be enough standalone Radeon RX Vega graphics cards to satistfy the demand and users will eventually be forced to go for Radeon Packs, the cheapest of which consists of only 2 AAA titles for a $100 differential.

Secondly - keep in mind that AMD hasn't stated anywhere in the statement that the re-stock will happen at the same SEPs as before, only that it will, which means that they could end up increasing prices regardless as well.

The reason that they are apparently giving for bunding two games is to scare off miners by forcing people to buy ‘Radeon Packs’ but this is something that can be easily solved by limiting standalone GPUs to 1 pc per customer and is basically nothing more than a glorified excuse. It is an especially low blow because AMD stated that the entire point of the Vega delay was to accumulate stock for launch and yet we saw that their entire inventory evaporated within minutes of launch, making it one of the worst stocked GPU launches in history.  One thing is for sure however, if after the re-stock, supply of RX Vega 64 and 56 evaporates just like before, every reviewer needs to update their conclusions based on the new 'effective' MSRPs.