A few days ago, the name AMD FirePro W9100 was discovered by Videocardz.com. This was a name that appeared on a random location and was edited soon after. It now appears that it was not a mistake and depicts the launch of AMD's Hawaii based Professional FirePro Series GPU. (Note that the actual name might not be W9100).

Our Concept - Not the Real Thing

The rumor mill is in full tilt and speculation is at an all time high. There is evidence however to believe that the new FirePro Hawaii GPU will have 6GB worth of memoy just like the W9000 Flagship. There is also speculation that there could be a 16GB FirePro S Series GPU with Dual Hawaii Cores ready at the reveal. Needless to say, if you are in the professional graphics industry this is one launch you do not want to miss. It is worth noting that AMD has renamed the event from "AMD FirePro Hawaii Launch" to "AMD Professional Graphics Showcase". This might be the result of a typo since the former is probably an informal inhouse name for the event and not actually the official designation. 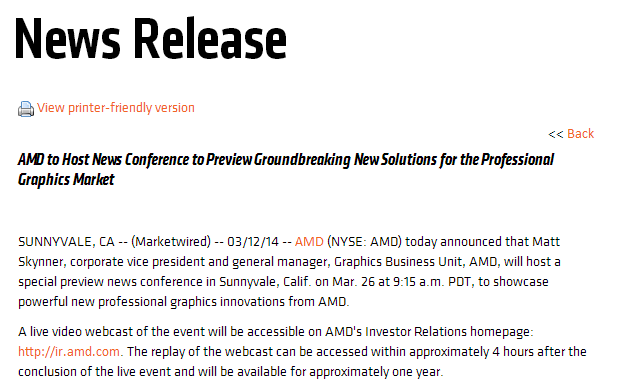 AMD has also revealed an entire brief regarding the evnt (not the contents of the same) detailing the time place and other minor details. Everything looks set for 26th Marh and by the looks of it the FirePro Hawaii Launch will probably contain new GPUs in the Plural. Nvidia has a massive headstart in the Professional graphics department but AMD has come a long way in the same. The Industry bias might be obvioulsy towards Green but speaking on theory alone, the AMD counterparts are now just as capable as their Green rivals. The launch of the Hawaii Professional GPU will also result in increased sales, which will allow AMD to hopefully keep their positive growth in this fiscaly year.

AMD: Professional Drivers have been ‘Rock Solid’ for the past two years