AMD has officially launched their Merlin Falcon family of embedded SOCs which are based on Excavator cores and the first AMD platform to feature support for DDR4 memory. The latest Merlin Falcon SOCs share the same design as AMD's Carrizo APU that are geared towards the embedded market and add some new features which we are going to talk about today in this article.

The Merlin Falcon lineup consists of five SKUs which form the embedded R-Series APUs lineup. The lineup includes the RX-421BD, RX-418GD, RX-216GD, RX-421ND and the RX-216TD. We first came to know about Merlin Falcon years ago when it was showcased in AMD's embedded roadmap from 2014 to 2016. There have been a lot of changes to the roadmap since its unveiling but today, we get to see a new product line that was featured in the roadmap.

In terms of specifications, the Merlin Falcon SOCs are quite similar to the recently launched Carrizo APUs. They feature up to four x86 Excavator cores with 2 MB of shared L2 cache. They have support for HSA 1.0 and the latest DDR4 memory standard while retaining support for DDR3 memory. The Excavator core ensures better IPC (Instruction per clock) versus previous generation cores and the SOCs feature the 3rd generation graphics core next (GCN) architecture which is the same level as the latest Fiji and Tonga GPUs. The new SOCs are designed with advanced display and multimedia features and come with AMD Secure processor technology. The PCH on the chip itself offers SATA, SD Card, SPI, 4-8 USB 2.0 and 4 USB 3.0 ports connectivity while the main chip offers up to 3 display outputs and additional PCI-e gen 3 x8 or PCI-e Gen 2/3 x4 lanes. Each Display output will be capable of single link DP 1.2, HDMI 2.0 or DVI. AMD also makes eDP 1.4 supported by their new SOCs with low voltage swing and intermediate link rates. 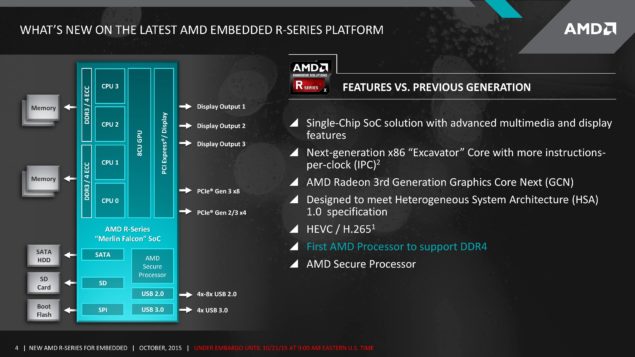 Being an SOC design, the chips are integrated with the PCH on the same die. This leads to a much smaller package than the previous Bald Eagle designs which had to ensure separate spacing for the FP3 compatible SKUs and the Bolton PCH which was integrated on main boards, rather than the die itself. Taking a closer look, we can see that Bald Eagle took much more space with the SKUs measuring 32mmx29mm on the BGA socket plus the 24.5mmx24.5mm footprint of the Bolton PCH. The Merlic Falcon SOCs measure just 37mm x 29mm (no PCH required on the board) saving up to 30% foot print on the motherboard.

"AMD continues its push into x86 embedded platforms and that's paying off with an increasing number of customers and applications," said Jim McGregor, principal analyst, TIRIAS Research. "There is a need for immersive graphics, high-quality visualization, and parallel computing in an increasing number of embedded applications. Across these fronts, the AMD Embedded R-Series SOC is a very compelling solution."

"With so much momentum around immersive experiences, especially for visual and parallel computing, the embedded industry needs a high-performance, low-power and efficient architecture with superior graphics and compute capabilities," said Scott Aylor, corporate vice president and general manager, AMD Embedded Solutions. "Our new AMD Embedded R-Series SOC is a strong match for these needs in a variety of industries including digital signage, retail signage, medical imaging, electronic gaming machines, media storage, and communications and networking. The platform offers a strong value proposition for this next generation of high-performance, low-power embedded designs." via AMD 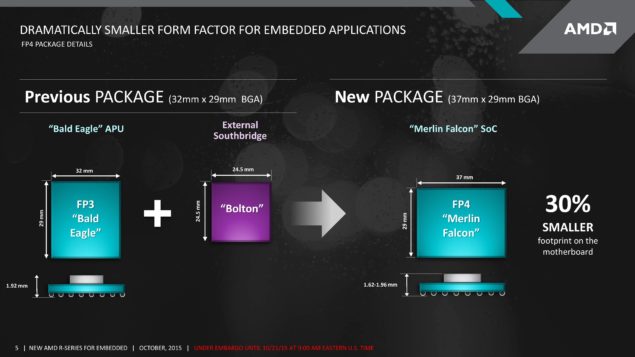 The lineup has five SKUs placed in two categories, first of which are pure APU designs. The RX-421BD is the fastest SKU featuring Quad core (dual module) design that is clocked at 2.1 GHz base frequency when the CPU is running at 15W TDP and a max clock speed of 3.4 GHz when the TDP is beyond 15W. On the graphics side, the chip comes with the Radeon R7 GPU with 8 GCN CUs which features 512 stream processors and clocked at 800 MHz. The max DDR4 memory speed supported by the chip is 2400 MHz and 2133 MHz for DDR3 memory. The SOC has a TDP range of 12-35W. The temperature range of the chip is 0-90C and higher iTemp Range revisions for the lineup will be launched in Q1 2016 with range of -40C up to 105C.

On the performance side, the RX-421BD APU at 15W is on par with the 35W RX-427BB which is based on the older Bald Eagle (Kaveri APU) design. The focused markets for these embedded processors will be industrial / automation controls, storage, medical, security/surveillance, retail signage, communication infrastructure and gaming machines. The Merlin Falcon SOCs mark AMD's transition to the DDR4 market space. The forth coming Zen and Bristol Ridge APUs will fully feature support for DDR4 memory on AMD's AM4 consumer platform.