[Rumor][Debunked: Fake] [See comment below for more information] The first CPUZ shot of the much awaited next generation APU has finally leaked out. The source is someone I have never used before but the site in question is of very high ranking. However, I am still going to tag this as rumor because of a single inconsistency mentioned below. The website is Guru3D . 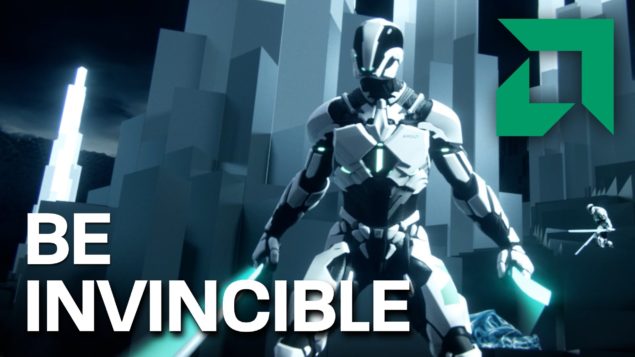 Now a CPUZ from a reliable source is pretty much what any news house worth their salt hopes for. And this appears to be just that. The first thing I noticed is that AMD is continuing the standard APU nomenclature and the new Carrizo APU will be called the A10-8890K. The A10 prefix indicates its part in the A-10 Elite series and K suffix indicates that this particular APU will have an unlocked multiplier. Now if you take a look at the logo you will notice that it says "Elite Hexa Core", which means that Carrizo APU has 6 cores and considering the TDP (95W) and core clock of 4.4 Ghz thats pretty damn impressive. Take a look at the CPUZ yourself: 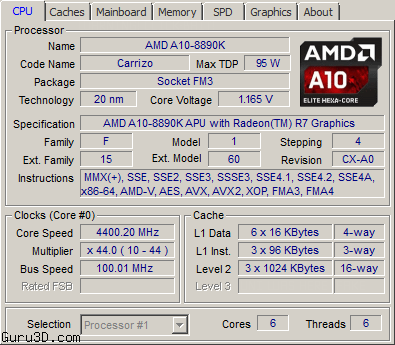 Now this particular APU appears to be based on the FM3 socket which is supposedly not coming till 2016, unless that report was completely off (or this CPUZ is fake). We were supposed to be getting the Carrizo APU on the notebook platform soon enough however, and this provides us with some much needed insight into that. Now according to AMD the CPU cores are actually going to be Excavator cores, which is the last revision of Bulldozer (and probably the last CMT architecture). We should expect some decent IPC gains from the new cores and the additional core count will ofcourse help overall compute. Here is a comparison table of the Kaveri, Richland and Carrizo APU flagships:

Notice that the nomenclature is taking a gradual increase. The values from this particular CPUZ have been entered into the chart. Values that are '(?)' indicate speculated values and values that are '?' indicate unknown values. I still cant believe we are looking at an actual HexaCore APU, if AMD couples with with the correct amount of GPU cores, we could be looking at the first real APU to break the HTPC barrier.  However, one thing does bug me about this CPUZ shot. Note the readings at the cache, level 2 to be precise. It says 3x1024 KBytes. Thats just 3MB of L3 Cache right there. For 6 Cores that is a very low amount of cache. So either this screen is fake after all, or, AMD might be working some mysterious magic where the memory is concerned. I am talking HBM and the likes. Stacked DRAM would most certainly lift the burden of L2 Cache and would explain the shortage of the same but I will leave that up to you guys to decide.

#AMD Carrizo Leaked CPUZ. Dont know if legit or not, but damn, that looks impressive. http://t.co/LIDp7GtIEq