We've just learned that AMD is planning to show some of its high-end AM4 X370 motherboards for Zen In ten days. This will take place at the exclusive Zen hands-on preview event that the company announced a couple of days ago called New Horizon.

Wccftech has learned that a small number of board makers will be showing some of their Zen compatible motherboards based on the X370 chipset and the AM4 socket at the event for the very first time on December 13th. We've also heard some whispers which suggest that the event could also include a showcase of new AM4 compatible CPU coolers.

New Horizon will be very much a fan-focused event where enthusiasts will be able to get hands-on experience with the latest toys from the red team. It's also going to be streamed live so even those who were not fortunate enough to attend will be able to get in on the action.

Join AMD at New Horizon on 12/13 at 3pm CST for an exclusive advance preview of our new “Zen” CPU ahead of its 2017 Q1 release. New Horizon is AMD’s fan-focused event, designed to engage our most dedicated customers.

As well as a hands-on preview of the power of “Zen”, attendees will be able to talk to the AMD minds behind the chip itself and grab expert gaming advice from eSports & Evil Geniuses legend PPD.

The event is hosted by industry veteran Geoff Keighley, who’ll introduce special guests throughout the day.

This will be AMD's biggest opportunity to generate some buzz around its highly anticipated Zen family of high-performance desktop processors code named Summit Ridge before its official launch early next year.

The X370 chipset is tailored for enthusiasts and what we know about its feature-set clearly reflects that. Thanks to numerous leaks we know that AM4 X370 motherboards will support CPU & RAM overclocking as well as both CrossFire & SLI Multi-GPU setups. The chipset reportedly natively supports up to two full x16 PCIe Gen3 lanes or four x8 PCIe Gen3 lanes for Dual, Triple and Quad Multi-GPU setups.

The photo above is a sneak peek of an upcoming AM4 motherboard. It features an entirely black PCB, which will make a lot of people happy. The unit is missing its VRM heatsink, which is typical of early pre-launch motherboards samples where the aesthetics of the design haven't yet been finalized. We can clearly see the new white AM4 socket as well as four DDR4 memory slots to its right. Below the x16 PCIe 3.0 slot we can also see an M.2 interface and the south-bridge heatsink to its right. 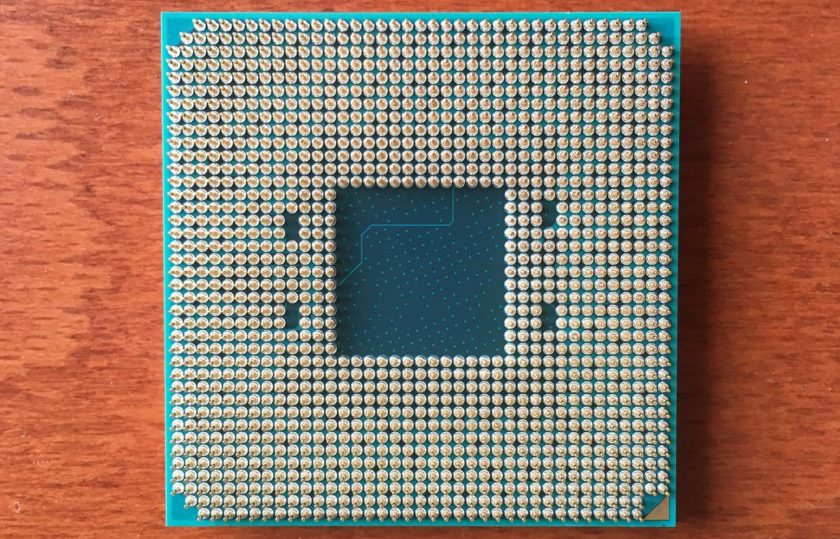 Backside of an AM4 Processor

The Summit Ridge family of desktop Zen CPUs will debut next year at CES in January with on-shelf availability expected approximately a week later. The new family will include high-end SR7, midrange SR5 and entry-level SR3 CPUs. The highest end eight core, sixteen thread SR7 CPUs will debut first, followed by the mid-range and entry-level six core and quadcore SKUs.

Last week we covered a significant development regarding the company's incredibly impressive flagship "SR7" 8 core, 16 thread chip. An engineering sample of the new processor with a 3.5Ghz turbo clock speed was spotted recently and it is believed that the first ever Zen product to launch would be based on this same very chip. This 8 core SR7 Zen flagship is rumored to launch at an MSRP of $499 and give Intel's $999 i7 5960X 8 core Haswell-E chip a run for its money in terms of performance.

We've laid out the feature set of Zen and AMD's brand new X370 chipset and AM4 platform in detail, all of which you can find here. If you're interested in the Zen microarchitecture itself, we've got you covered in our deep-dive architectural break-down based on AMD's Hotchips presentation & the information released at Zen's performance demo event.