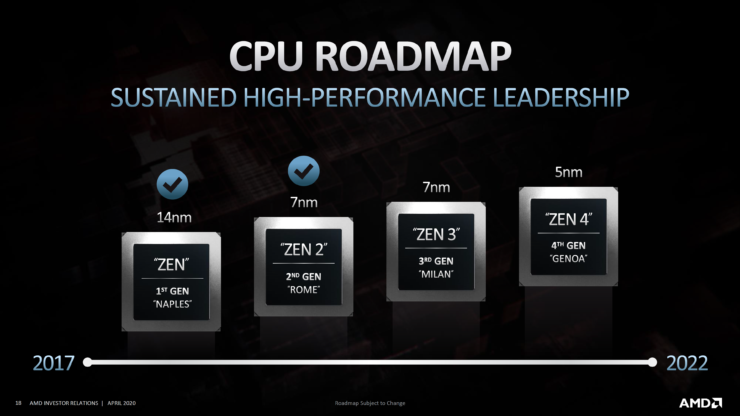 AMD has had a solid run with TSMC in developing its Ryzen CPUs and it looks like they'll be getting the full benefits of this long-running partnership with its upcoming Zen 4 based 5nm CPUs. AMD is expected to launch Zen 4 based Ryzen and EPYC CPUs in 2021 and reports from ChinaNews (Via PC Gamer) suggest that Zen 4 might get the most advanced and enhanced version of TSMC 5nm node for its CPUs.

The prime source at ChinaNews reports that TSMC has developed what they are referring to as an enhanced 5nm process node. Previously, it was reported that aside from Apple, Huawei could have been a potential customer but yesterday's report revealed that Huawei is now going with SMIC and not TSMC. But the advanced version of 5nm means that TSMC would have a leading edge over the competing 5nm nodes.

It is reported that TSMC has developed a 5nm enhanced version process specifically for AMD. AMD's capacity requirement is not less than 20,000 12-inch wafers per month. via ChinaNews

Both Apple and AMD would be the biggest customers for TSMC's 5nm process node. As it is stated in the article that Apple has requested TSMC to add up to 10,000 pieces of production capacity by Q4 2020 while AMD's capacity requirement is not less than 20,000 12-inch wafers per month. This shows that there's a healthy demand for chip wafers at TSMC and we can expect production start by either early or mid of 2021.

The removal of Huawei from the 5nm equation and also their reduced orders for TSMC's 7nm node could bode well for Apple & AMD. Currently, TSMC's 7nm node has a large order to fulfill for both, NVIDIA and AMD as they have increased the number of orders for their next-generation products.

AMD will be relying on TSMC's 7nm for its Zen 3 based Ryzen 4000 & EPYC Milan CPUs while NVIDIA is expected to manufacturer its HPC class Ampere GPU on the advanced 7nm (N7P) node. But like N7P which is an advanced version of the N7 node, the enhanced 5nm node might end up being the N5P node which is referred to as a more optimized version capable of delivering 7% better perf at the same power or 15% power reduction at the same perf. While the exact details of the enhanced 5nm process node are still unknown, I believe it could be an exclusive variant such as TSMC's 12nm FFN (FinFET NVIDIA) which was built exclusively for NVIDIA's Turing GPU lineup.

Based on these figures, we can definitely expect some major leaps in performance and efficiency for Zen 4 based processors. AMD will primarily focus on its EPYC Genoa server lineup before it moves to Ryzen 5000 series desktop processors. Both of these are crucial markets but with Intel readying its 10nm++ Sapphire Rapids lineup for a 2021 launch, AMD would like to be in the market first with a leading 5nm server lineup.

As for the desktop lineup, when AMD moved over to TSMC from GloFo, we instantly saw a huge increase in performance efficiency and gains in almost every department. With Zen 4 based on an enhanced 5nm node, we can expect bigger gains considering it will be a huge node shift (1st Gen 7nm to Enhanced 5nm) instead of Zen 3 which might use an enhanced 7nm variant.

Genoa CPUs would be featured in the El Capitan supercomputer which is expected to deliver over 2 Exaflops of Compute power when it becomes operational in 2023. It would also utilize the next-generation CDNA2 GPUs which are solely designed for HPC workloads. The new EPYC lineup would be outfitted with the 3rd Generation Infinity Fabric architecture which you can find more details on over here. We can expect similar platform features for AMD's Ryzen 5000 desktop CPUs which will be the first family since the original Ryzen 1000 series to use a brand new platform with a new AM* socket and other features which are yet to be detailed.