There's been a lot of chatter over the past several months about AMD's second generation Vega products. Thanks to recent revelations directly from AMD we've learned more about these parts that are set to take on NVIDIA's Volta next year.

We're only a month away from the debut of AMD's first graphics card based on its next generation Vega architecture, the Radeon RX Vega Frontier Edition. In less than two weeks we're also going to finally be able to see what AMD has in store for us on the gaming side of the Vega launch.

New Vega products are set to bring team red back in competition with team green in the high-end in a big way. While there's a lot of excitement surrounding it for this reason the nature of the industry dictates that any player in it has to be thinking two steps ahead at any given moment. So what are AMD's plans for Radeon over the next couple of years?

Why Yearly Product Updates Are So Important

For quite some time it was thought that whatever Vega products AMD launches this year will have to compete with whatever NVIDIA Volta products comes up with over the next 18-24 months before 7nm is ready for the Navi ramp. Thanks to AMD's recently disclosed roadmaps at its FAD event earlier this week we now know that this is not the case. The Vega we'll see this year is only meant to hold the line until second gen Vega rolls around next year. 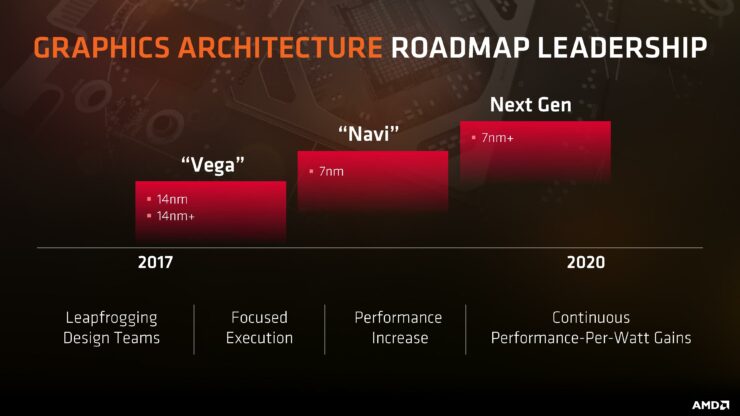 This appears to be the first example of AMD's new executive strategy to roll out yearly product updates. A lesson no doubt learned after the disastrous nearly year long absence of Radeon competition that began in Q3 2014 and sent Radeon market share plummeting over the next three quarters to the lowest point in the company's history. A misstep that cost the company's then head of graphics, Matt Skynner, his job and prompted the then newly appointed CEO Lisa Su to create the Radeon Technologies Group and put graphics guru Raja Koduri in charge.

We've seen AMD execution dramatically improve since then with the successful ramps of Polaris and Ryzen. The company's EPYC product also appears to be another major hit in the datacenter and is shaping up to be a major distributor in the market.

AMD Working On 14nm+ Based Vega 2.0 To Compete With NVIDIA's Volta Next Year

AMD hasn't said much about 14nm+ Vega at FAD, it was just too early to disclose any significant details a year in advance. What we do know however is that it definitely exists. It's also safe to assume that due to the refined process we're looking at higher clock speeds and better overall performance/watt compared to the Vega products we're going to see this year.

Some of you will ask how does the fabled Vega 20 chip tie-in into all of this? Vega 20 is likely to make use of the refined 14nm+ process because of its rumored 2018 timing. Based on what little we know about it, it does not appear to offer any tangible performance improvements in gaming nor is it meant to do so.

According to allegedly leaked roadmaps we've seen last year, which offered limited details at best, Vega 20 will have twice the memory capacity of the Vega Frontier Edition (32GB) but the same 64 compute unit engine, albeit a slightly tweaked one. Vega 20 is allegedly designed to deliver improved double precision compute throughput for HPC applications, something that has very little impact on gaming performance.

It's very important to point out that all the leaks and rumors we've seen surrounding Vega 20 up to this point pegged it as a 7nm chip. Now that AMD's new GPU roadmap has come out I'm far more reluctant to lend those leaks much credence. There's no indication in AMD's official roadmap that there will ever be any 7nm based Vega products. This could be the result of a change of plans or simply an omission of detail. Whatever it may be, we have no official indication that 7nm Vega 20 is in the works, so take that information as you will.

Is Vega 2.0 Going To Be Enough To Compete With NVIDIA's Volta ?

Now this is the key question to ask and the answer depends on three simple factors. How competitive Volta turns out to be, how competitive Vega is and how much better Vega 2.0 ends up being. NVIDIA's execution track record over the past several years has been very strong but also very predictable. Assuming it continues to be as tight as we've seen it in the past then the GV104 Volta should offer just enough performance to beat NVIDIA's fastest Pascal, and do so at a lower price point.

If Vega manages to hold its own against NVIDIA's high-end today Vega 2.0 should be able to do the same come 2018 against Volta. The downside for AMD is that even if it manages to compete successfully, NVIDIA will be making most of the money. That is assuming high-end Vega 2.0 is based on the same GPU die AMD is going to launch this year i.e. Vega 10. Volta GV104 on the other hand will no doubt be smaller than big Pascal and thus less expensive to produce and significantly more profitable.

It used to be that every two years we got a full lineup of GeForce and Radeon graphics cards based on an improved architecture. And while NVIDIA continued with this tradition AMD has ostensibly drifted away from it after GCN was introduced in 2012. What we got instead was a slow trickle of new GPUs every year and never a complete top-to-bottom stack. Unless AMD goes back to a regular two-year full-stack cadence its gong to be extremely difficult for it to ever get out of this competitive rut it's currently in.

Physical chip design is extremely costly and has gotten more expensive with every new manufacturing process. This is why we've seen AMD veer from its traditional graphics cadence. The hope is that its highly profitable new CPU products will generate the revenue it needs to make this a possibility again. AMD's graphics business kept it afloat for years when uncertainty had shrouded its future. It now falls on its CPU business to pay back the favor. It's time for AMD's reborn Athlon to save its Radeon.