The site has already removed this information confirming that the leak was legit and Guru3d was fast enough to get a screen-grab. The picture's however are the same as you can note, Hawaiian dancers are posted next to the last discrete GPU line confirming the Hawaii GPU as the flagship GPU of the volcanic island series. This was probably a huge leak since AMD hasn't till now posted anything official related their upcoming generation of graphic cards but this leak not only confirms new discrete graphic chips for desktop platform but also AMD's discrete mobility lineup. This actually confirms the rumor that was posted a few days ago by us about engineering samples being sent out to manufacturers for evaluation such as Sapphire. The card boasts a 12 layer PCB that would support the Hawaii chip (larger than Tahiti in die size) and upto 7 cooling designs have already been prepared by the manufacturer. 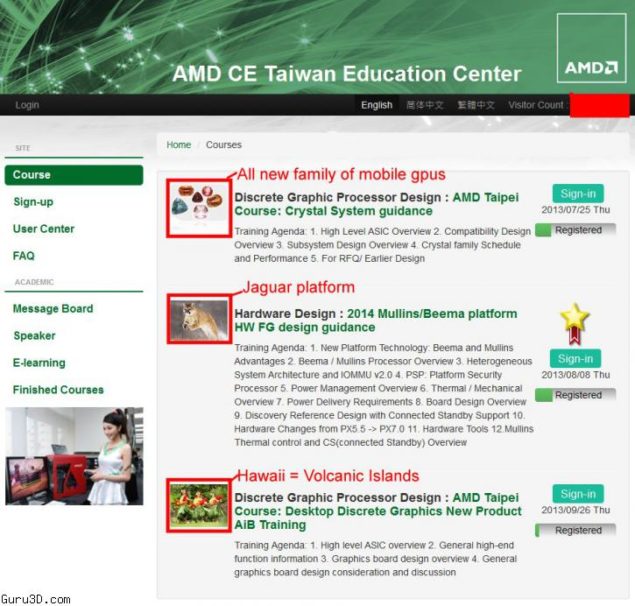 We can't pin point the launch at the moment but more information about the card would be available a few weeks before launch as hinted by the site. Most probably after internal evaluation and when samples and review units would begin to ship outside of AMD's building. The site lists a date of 09/26/2013 at which the card would reach qualification sample testing and most probably retail mass production would have commenced.

The AMD Radeon HD 9970 and the rest of the HD 9000 series SKUs are reportedly launching in October 2013 or Q4 2013. For the current moment, the HD 9000 series cards would compete against the GeForce 700 series cards and we would see a similar competition as we say when AMD released their HD 7970 at the end of 2011 against the GeForce 500 series. NVIDIA has high hopes that their Kepler GK110 and GK104 based cards would provide competitive performance against the new AMD cards which is the reason why they won’t release any new card till Q4 2013. Their Maxwell cards which are based on the 20nm architecture and feature Denver CPU with Unified memory architecture would arrive in first half of 2014.