AMD has officially unveiled their Vega GPU to the masses at CES 2017. Along with the architectural preview, AMD also provided a glimpse at the Vega GPU die which will power the next-generation Radeon RX 500 series graphics cards.

The AMD Vega GPU was actually showcased to selected press at the AMD Tech Summit. The new graphics chip will be AMD's first consumer aimed GPU to utilize the new HBM2 standard. This will allow them to double the capacity per die and clock per pin.

A Close-up of AMD's Biggest FinFET GPU To Date - The Mighty Vega, Over 500mm2

AMD Vega GPU is compared to other chips from NVIDIA and AMD. (Image Credits: Videocardz)

Close-ups of the GPU posted by TechReport, Computerbase and 4Gamer reveal that the GPU is the biggest FinFET design by AMD. Videocardz also made a comparison that showcases the huge chip against other GPUs such as the NVIDIA GP102, GP102 and AMD's Fiji GPU. The chip is somewhere in between 530-560mm2 so this is really a monstrous chip design and should pack a lot of power.

Highlights of the Vega GPU architecture's advancements include: 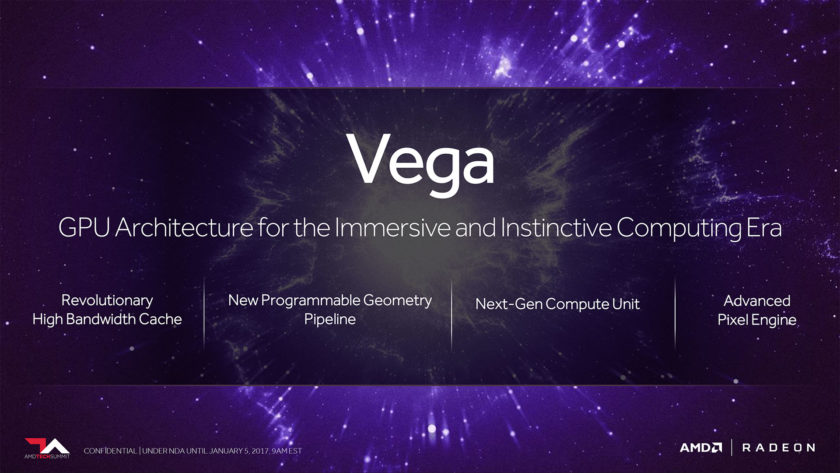 According to the report from TechReport who got to thoroughly test the Vega sample with 8 GB VRAM in DOOM, this specific sample is somewhere in between the GTX 1070 and GTX 1080 levels of performance. When set to Nightmare settings, the game reported max frame times of 24.8ms. We also recorded some gameplay of DOOM running on the Vega sample while we were at AMD's CES event.

Though that performance might not sound so impressive, it's worth noting that all of the demo system's vents (including the graphics card's exhaust) were taped up, and it's quite likely the chip was sweating to death in its own waste heat. By my rough estimate, that puts the early Vega card inside somewhere between the performance of a GTX 1070 and a GTX 1080 in Doom. via TechReport

The AMD Vega GPU is an exciting product and AMD has shared some key details of their next generation GPU with the audience. The launch of Vega GPUs is slated for the first half of 2017 and there couldn't be a better time to introduce Vega since AMD is also launching their next-generation AM4 platform for Ryzen processors in the upcoming months. For more details on the Vega GPU architecture, please visit our detailed post here.