Our colleagues over at CPU World recently sent us some very interesting details regarding the PRO Series APU, which is a fancy name for OEM-Only Kaveri APUS with a locked multiplier. This is one of the reasons why we didnt cover the PRO Series in detail, since a name change and a locked multiplier didnt really warrant detailed coverage. However they have just updated their lineup with new APUs that are actually not present in the original Kaveri Series, infact they are almost certainly from the Richland Series. 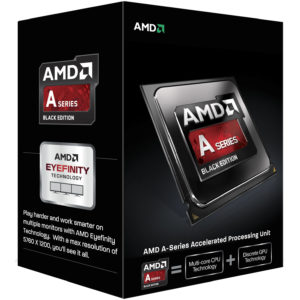 Now the PRO-Series is exclusively for OEMs and B2B transactions, basically the 'Business Editions' of AMD's Kaveri Lineup. I guess an intro is in order since we have not covered these in detail before. These APUs will have a much longer 'life support' package and will be installed in OEM systems. Uptill yesterday this series consisted entirely of 7 Kaveri SKUs (4 Desktop and 3 Mobile) that had their multipliers locked. All these Kaveri APUs consumed only 65W TDP with the exception of the flagship which consumed 95W. The flagship is the A10 PRO-7850B where the 'B' stands for Business Class. This APU is the obvious counterpart of the A10-7850K of the mainstream APUs. Now however there has been an addition of two SKUs and one of the these is not Kaveri and judging from the Graphic portion it is a Richland APU.

As CPUWorld states "Specifications of these models were spotted (PDF file) in QuickSpecs of HP EliteDesk 705 G1 business PC." Now the SKU we are concerned about is A4 PRO-7300B. This APU actually has the highest clocks in the entire lineup with the base clock being 3.9 Ghz and Boost of 4.2 Ghz. It features 1MB of L2 Cache and DDR3 1866Mhz. This APU does not feature an R5 or an R7 series GPU, instead it features the 8470D graphics, which implies its nature as a Richland core. Here is the full lineup of the PRO-Series 'Business Class' AMD SKUs: