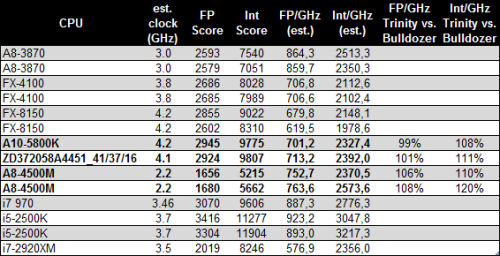 The results gathered by Citavia pit the desktop A10-5800K and Mobile A8-4500M and a few other APU's against some of the recently released Bulldozer and Sandy Bridge processors. The benchmarks used were mostly Single Threaded which give a more fair idea of the Single core performance increase. Compared to Bulldozer FX-8150, The A10-5800K at same clock of 4.2GHz pumps out an average 10% increase while the mobile parts show upto 20% core performance increase.

Comparing these results we could see upto 15-20% increase in the Piledriver (Vishera FX) based desktop lineup which launches around Q3 2012. The worse part is that while trinity may seem faster than bulldozer at clock-to-clock comparisons, its performance is pretty underwhelming compared to the Llano APU's (A8-3850/3870) which are also shown in the comparison chart.