An interesting update on AMD's Tornoto Platform has appeared. It would seem that AMD is going to allow DDR3 and DDR4 support simaltenously on this particular platform. The leak source is Bitsandchips.it and they detail AMD's decision about including dual IMC support on Toronto APU. 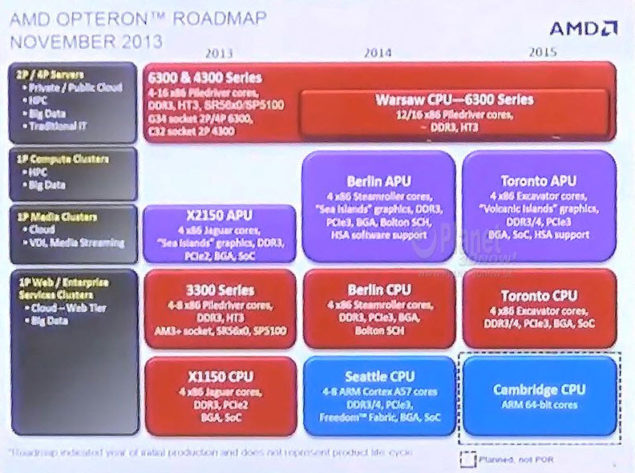 The Toronto APU and CPU are part of the AMD Opteron platform and are going to feature Excavator cores. A previously leaked roadmap showed that the Toronto SoCs will either support DDR3 or DDR4 memory, but now it would appear that they are going to support both thanks to Dual IMCs (Integrated Memory Controller). AMD has previously steered clear of DDR4 memory partly because the Industry hasn't grown accustomed to it and partly because it costs an arm and a leg. However, they seemed to have reversed that decision. The Opteron platform currently houses the Berlin APU and Toronto is the successor of the same with the next revision of Bulldozer architecture. Both the APU and CPUs will have 4 x86 Excavator cores.

Carrizo was supposed to have DDR4 Memory but this was abandoned (according to latest reports) due to the high cost of the memory in question. So why has AMD decided to give Toronto processors this benefit? Well the reasoning is simple. Even though DDR4 is expensive, the expense only applies to consumer markets. Server markets exist on a very strict cost and value model and only the relative expense per performance increase matters to them. Simply put, the Server Market would be indifferent to the expense that DDR4 entails. Another factor is the fact that DDR4 memory can support higher memory densities while having lower power consumption than DDR3. These two factors are once again something very important for the server markets that operate on a Performance-Per-Watt model. Finally, this would make the Toronto APUs and CPUs future proof for when DDR4 does become cheaper than DDR3 (around 2016). The source is also hopeful that we will be seeing stacked DRAM on the Mobility platform of Carrizo APU as well, something which should have very positive effects on the performance of the next gen APU.