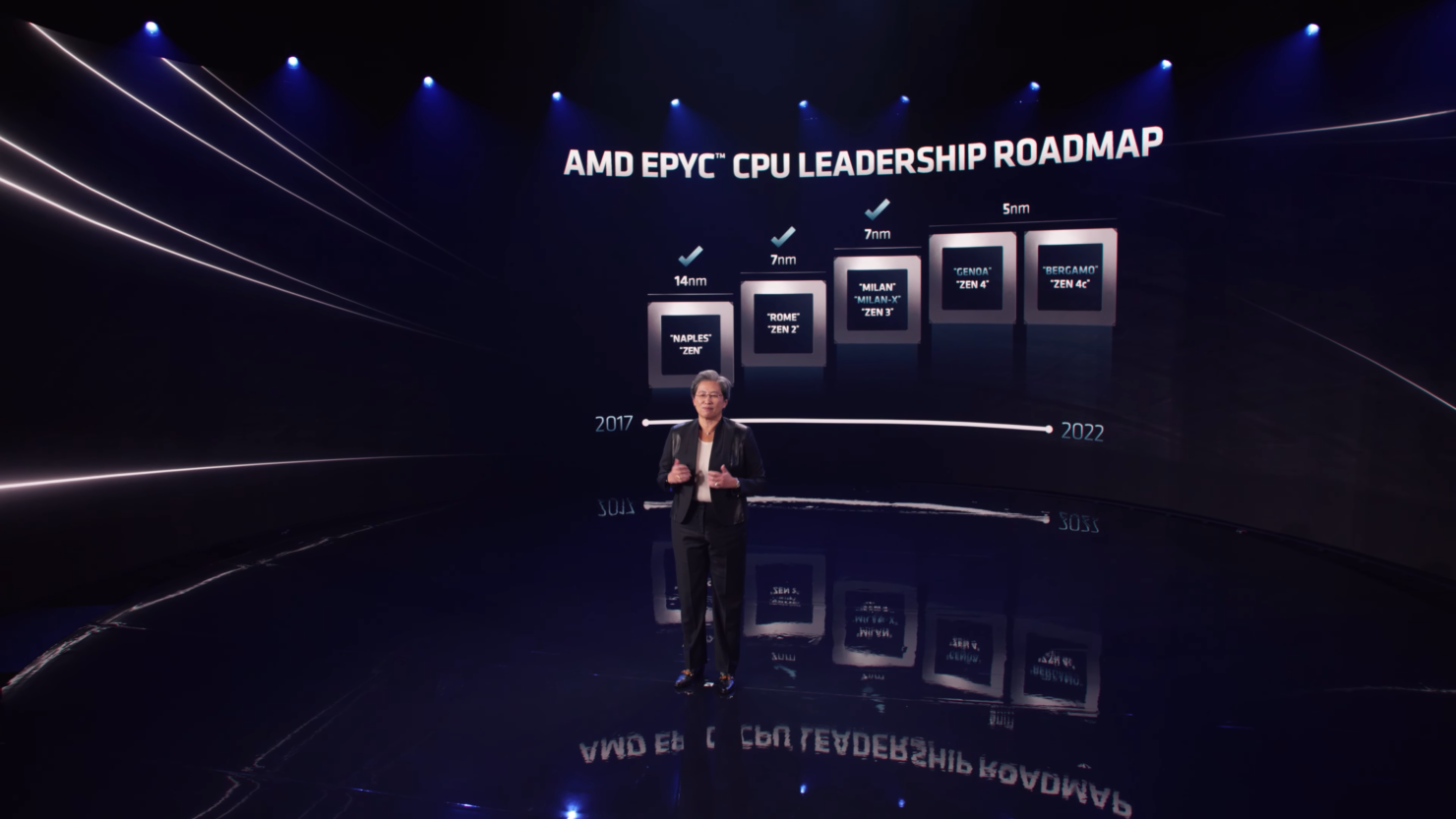 In addition to the two key EPYC & Instinct announcements, AMD also teased its next-gen Zen 4 powered Genoa and Bergamo CPU families. The Genoa and Bergamo EPYC chips will feature a brand new core architecture with the former offering up to 96 Zen 4 cores and the latter with an insane 128 Zen 4C core package.

AMD didn't just unveil that they are bringing Genoa and Bergamo to the EPYC family but also unveiled a brand new chip architecture in the form of Zen 4C. The Zen 4C core was talked very recently in rumors as Zen 4D and we know a thing or two about it but first, let's talk Genoa that utilizes the standard Zen 4 cores.

There have been quite a few rumors going on about AMD's EPYC Genoa being 128 core but it's time to put that to rest. Based on what AMD has shown, the AMD EPYC Genoa lineup will feature TSMC's 5nm process-based Zen 4 cores and a total of 96 of them. From what we can tell, AMD might have evaluated or tested Genoa with 128 cores internally but seemed to have featured 96 cores on the final design. The 96 core Genoa chips are what will compete against the non-HBM Sapphire Rapids Xeon CPUs. 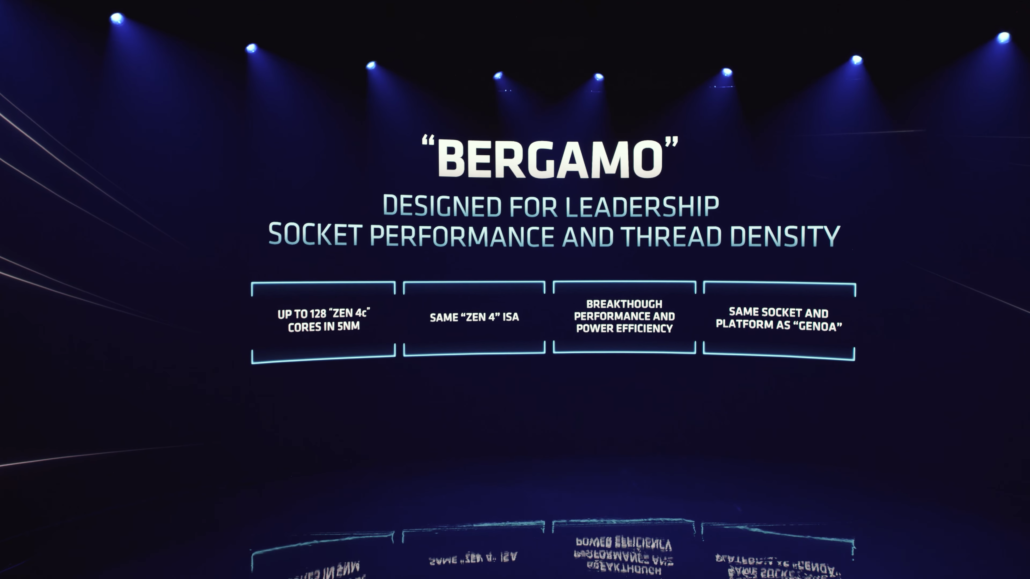 But soon after Genoa, AMD is expected to launch another Zen 4 based server lineup known as Bergamo. The EPYC Bergamo chips will be featuring up to 128 cores and will be aiming the HBM powered Xeon chips along with server products from Apple and Google with higher core counts (ARM architecture). Both Genoa and Bergamo will utilize the same SP5 socket and the main difference is that Genoa is optimized for higher clocks while Bergamo is optimized around higher-throughput workloads.

In slides regarding Bergamo, it is clearly stated that the CPU lineup is optimized to offer breakthrough performance and power efficiency on the same socket and platform as Genoa. The main difference here is the reliance on the newer Zen 4c cores. The Zen 4 cores are said to be optimized for scale-out performance and offer significantly improved power efficiency along with density-optimized cache hierarchy.

It is rumored that AMD's Zen 4c cores will be a stripped-down version of the standard Zen 4 cores with a redesigned cache and few features. The cores are also said to feature lower clock speeds to hit power consumption targets but the main goal is to increase the overall core density. While Zen 4 will rock 8 cores per chiplet, Zen 4D will rock up to 16 cores per chiplet. This will allow AMD to up lift its core count on next-generation processors and also scale up its multi-threaded performance. 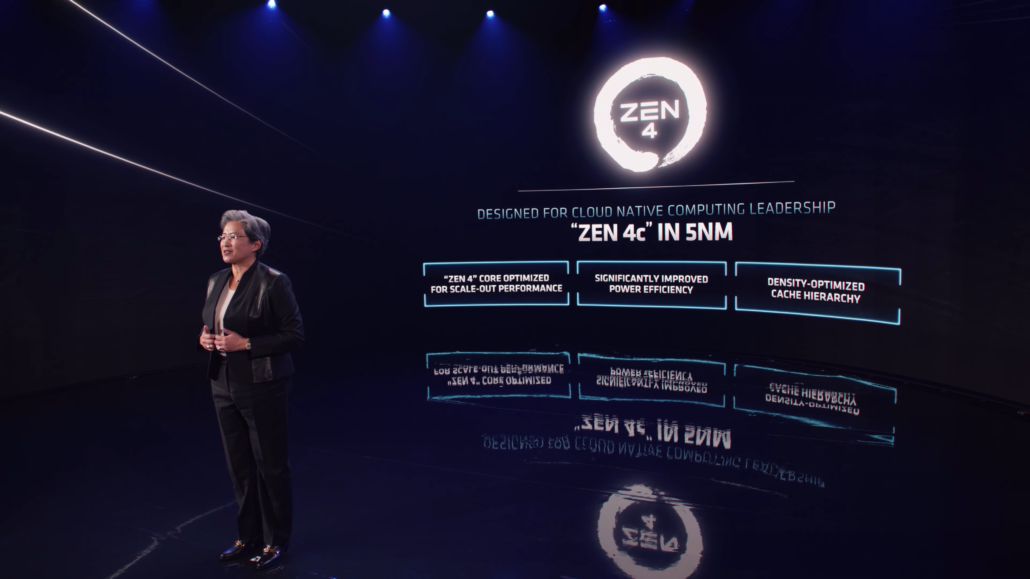 It also makes sense why this chiplet design is heading to the EPYC Bergamo CPUs first as AMD is intended to further increase its leading multi-threaded performance in the server field. The reason to strip down the majority of features is that Zen 4D 16 core CCDs will take up the same space as standard 8 core Zen 4 CCDs. So a Zen 4D chiplet with all the Zen 4 features will lead to a bigger die size. It is also mentioned that Zen 4D might feature half the L3 cache of Zen 4, may remove AVX-512 support, and SMT-2 support isn't confirmed. That looks a lot like the Gracemont cores on the Alder Lake CPUs which also feature lower clocks, per core L3 cache, and don't support SMT.

It is likely that AMD is going to segmentize their Zen 4D and Zen 4 chips with Genoa being the full-fledged Zen 4 design while Bergamo being a hybrid design. Genoa will feature AVX-512 as the leaked documents from Gigabyte revealed while Bergamo will be aimed at applications that require core density over AVX-512 support. The number of memory channels might also increase to 12-channel DDR5 with Zen 4D powered Bergamo CPUs.