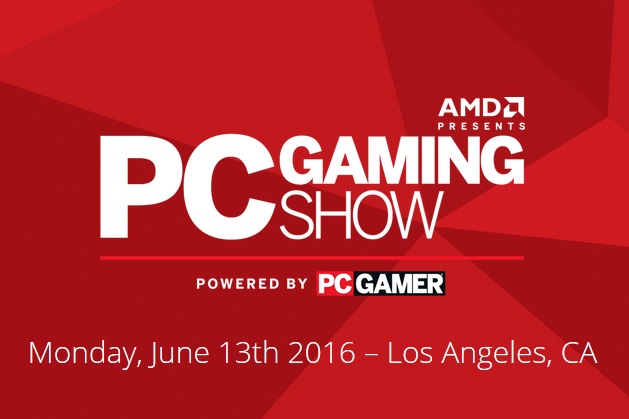 That's right, AMD is set to make even more "BIG" announcements later today following its highly successful Computex press event two weeks ago in which the upcoming Radeon RX 480 GPU and Zen CPUs were introduced to the world for the very first time. It has now become abundantly clear that the company isn't stopping there and has some very exciting plans and announcements lined up for E3.

The PC Gaming Show at E3 to be more specific. A now yearly venue that the company had a direct hand in setting up last year and sponsoring. For this year's PC Gaming Show, the red team will be making a return. To announce what exactly is still a mystery. However, expect major Virtual Reality, DirectX 12 and other game announcements in addition to even more of the company's Polaris based Radeon RX 400 series. The recently announced RX 480 has garnered so much popularity over the past couple of weeks since its unveiling at Computex. Largely thanks to the unprecedented DirectX 12 gaming and VR performance per dollar that it promises to deliver to gamers come June 29 when it hits shelves.

What Does AMD Have In Store For US? - Watch E3's PC Gaming Show Here

At last year's event we saw AMD unveil major game partnerships in addition to several huge hardware announcements and demos of the company's then new Radeon 300 series gaming graphics card lineup as well as the flagship Fury GPU family. Whatever AMD has lined up for this year's PC Gaming Show is definitely going to be worth seeing.

"The PC Gaming Show starts at 11:30 AM Pacific (2:30 PM ET, 6:30 PM GMT) on Monday, June 13 and will run for 90 minutes. If you tune in, you can expect a mixture of exclusive new footage, new trailers, new details on existing games, and unscripted conversations between developers and our host, Sean ‘Day9’ Plott.

Following the main presentation, we’re airing additional interviews and gameplay footage with some of our participants, which we’ll use as an opportunity to dig into greater detail on some of the games and hardware shown on stage."

Who's going to be at the show? well it's definitely not a shortlist!

There are a few more "mystery" guests that have been kept under wraps and will be a surprise.