A few days, a curious rumor was floating around the interwebs: namely that of Nvidia's next generation Pascal GPUs not shifting to HBM memory. I found the concept rather silly, not to mention having an utter lack of evidence, and decided not to publish it. The reason - according to the report - was that AMD is charging huge IP licensing fees, forcing Nvidia to revert to GDDR5 memory. Now (via KitGuru) AMD has completely squashed these rumors, stating that HBM is 'free for all'. 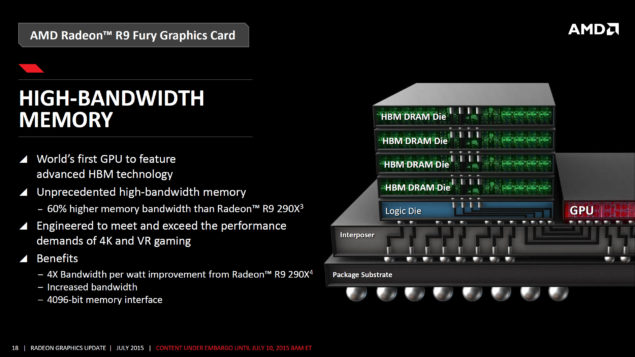 AMD was the first to use HBM (memory) in its graphic cards and is enthusiastically promoting the new standard in the industry. It has explicitly stated that it does not intend to charge any royalties for using the IP. As the source notes, it took AMD 8.5 years to perfect High Bandwidth Memory but at this point in time, it is very expensive to deploy in GPUs. One of the ways it would become less expensive (for everyone, including AMD) is if the rest of the Industry embraces the standard as well, lowering costs by way of economies of scale (achieved by the manufacturer).

"AMD is not involved in collecting any royalties for HBM,” said Iain Bristow, a spokesman for AMD. “We are actively encouraging widespread adoption of all HBM associated technology on [Radeon R9] Fury products and there is no IP licensing associated.”

There are various reasons why the rumor was just that. Because while Nvidia does not comment on rumors, referring to their past announcements on the matter - we can easily find that the company does indeed plan to shift to HBM; HBM2 to be precise. The exact IP in question, that the rumor had alleged to be the cause of the issue, was that of the 2.5D interposer, which is owned by AMD amongst a few other patents. It was stated that Nvidia would either need to pay up or design their own package. However, the IP is part of the JEDEC’s JESD235 standard and is allowed to be implemented without compensation (or under reasonable terms). Furthermore, Nvidia and AMD have a very diverse cross-licensing agreement which wouldn't have allowed royalty demands in the first place.

There are currently two Pascal cores that we know about – the GP104 and the GP100. The GP104 will be the GM204 successor while the GP100 will be the flagship Pascal GPU from Nvidia. Both will be manufactured on the 16nm node from TSMC using FinFETs. Nvidia has been on the same 28nm node for around 3 years now but has managed to always deliver in terms of performance jumps per generation. Ofcourse, it is becoming exponentially difficult to maintain unless they shift to a lower process – something they plan to do with their next generation of GPUs. The use of HBM2 will let Nvidia put upto 32GB of video buffer on their GPUs and upto 1TB/s of bandwidth while using upto 4, 8-Hi stacks of HBM2.