The latest AMD server roadmap for Opteron processors was displayed during the WorldHostingDays events which show that AMD plans to keep their recently released Opteron 6300 CPUs till 2014.

The Opteron 6300 series codenamed "Abu Dhabi" based on the Piledriver architecture would exist for AMD's server market till a replacement arrives in second half of 2014 based on an unnamed 28nm architecture. Same goes for Seoul aka Opteron 4300 series which won't see a successor till the same timeframe.

The unnamed CPU architecture for future high performance CPU from AMD is known as Steamroller which is based on the 28nm architecture. The roadmap confirms that AMD has indeed delayed Steamroller to 2014, previously set to launch in 2013. Steamroller would only arrive in 1H of 2014 with a revision to Piledriver for desktop market in 2013. 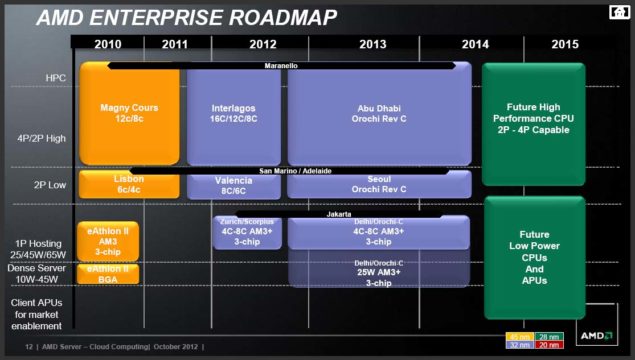 AMD's Jakarta "Low Power platform" would get the Dehli based Opteron 3300 series processors which would be 1 socket capable with 4-8 Core modules and would be supported by the AM3+ socket. While Dehli would launch in 45/65W variants, AMD would also launch 25W low power variants of Opteron 3300 CPUs. As far as APUs are concerned, AMD would update its FirePro line of APUs only until 2014. AMD would also launch Kaveri based 28nm APUs in 2014 featuring Steamroller cores while Richland would debut next year featuring Piledriver cores. You can learn more about AMD Server Roadmap from this PDF.