The results from the two sources were posted over at SiSoftware and Geekbench databases. Both databases are known to record and list down various entries of processors that are tested by the userbase and even hardware manufacturers prior to release. Similar entries were spotted in June and a month later, we can expect some improvements in the overall performance as drivers and applications are provided better support for upcoming hardware. 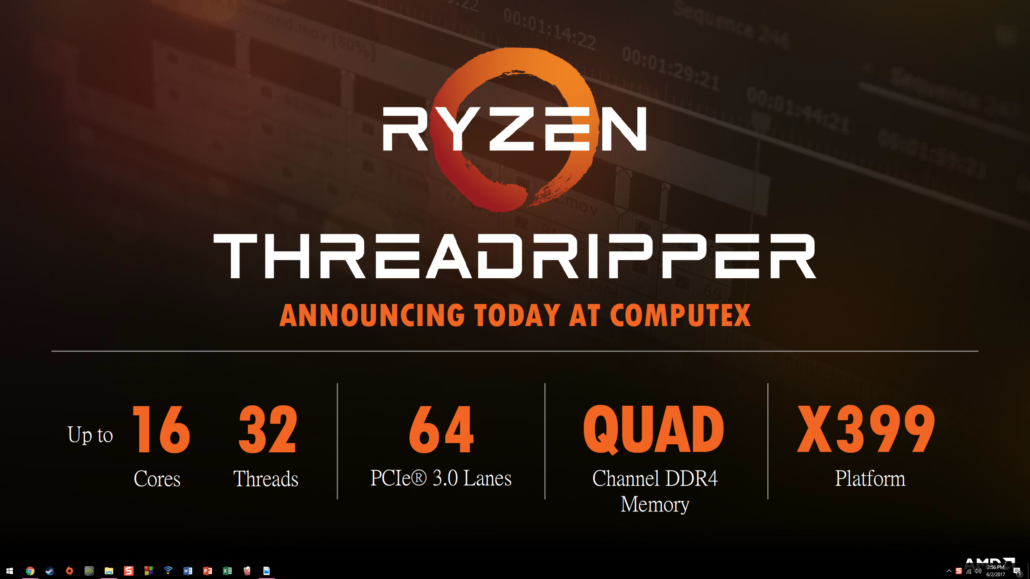 The processor that was tested is an AMD Ryzen Threadripper 1950X. The chip features 16 cores, 32 threads and a base clock of 3.4 GHz. Based on the rumored specifications, the chip should feature boost clocks of 3.6 GHz and XFR boost clocks of 3.7 – 3.8 GHz. The chip will carry 32 MB of L3 cache and 8 MB of L2 cache which totals 40 MB.

In terms of performance, the Ryzen Threadripper 1950X scored 4074 points in single core test. The specifics are 3933 Integer, 3869 Floating point and 4245 memory benchmark scores. Moving on to the multi-core performance, the chip scored a total of 26768 points. The specifics in this field were 31567 Integer, 34794 Floating point and 5206 memory benchmark scores. This shows that we are looking at some very high-end performance numbers from the Ryzen Threadripper series. Looking at the multi-core scores, we can see a slight improvement so definitely some changes were made. 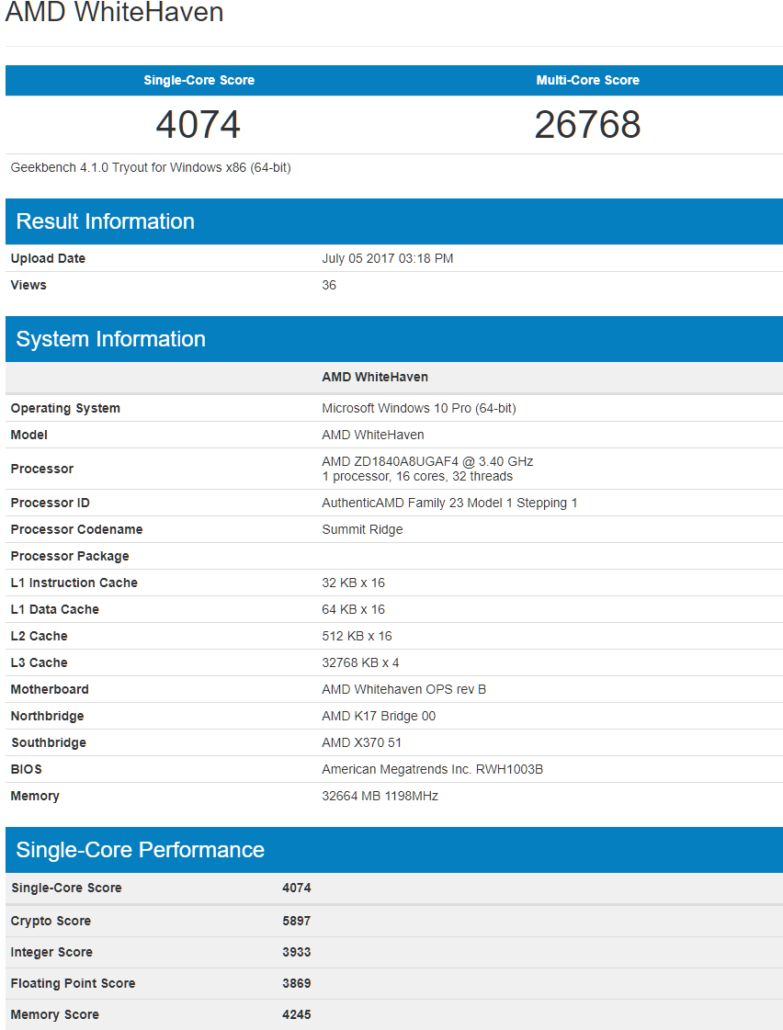 Last time, we added an Intel Xeon E5-2697A V4 processor to the mix for comparison purposes. The chip features total of 16 cores, 32 threads and a base clock of 2.6 GHz which boosts up to 3.6 GHz. It can be seen that the chip isn’t a direct comparison as it has lower base clock frequency but boost clock does match the Threadripper speeds. A single Xeon 16 core chip scores 3651 points in single core performance and 30450 points in multi-core performance. You can note that while single core scores lacks when compared to 1950X, the multi-core performance is much higher. 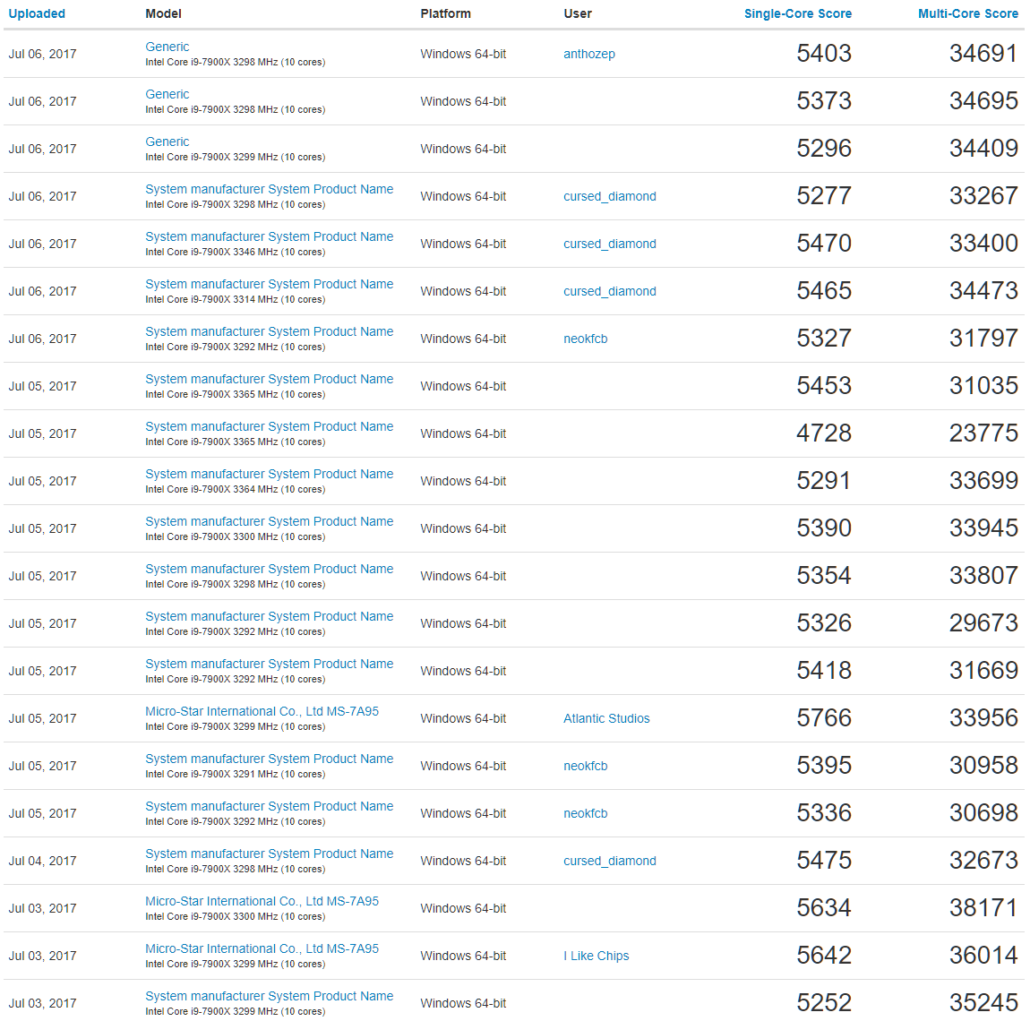 Furthermore, since the last 1950X appearance, Intel has also released their Core-X series CPUs so we can make a direct comparison of AMD's HEDT processors with Intel's HEDT offerings. Here, we compare the Intel Core i9-7900X, a 10 core chip and Intel's flagship currently with the 1950X. Intel Core i9-7900X on average has a score of 5000-5300 points in single-core and 32000-34000 points within the multi-core performance tests.

Both the single and multi-core scores are much higher than that of a Ryzen Threadripper 1950X which features 6 more cores and a whopping 12 more threads compared to Intel's offering. But it looks like AMD hasn't made much multi-core or single core optimizations as of yet for them to match a 10 core Intel CPU. Intel is expected to release even more models with 12, 14, 16 and 18 core variants in the coming months. Ryzen Threadripper will arrive a bit early in July if rumors are true but it looks like they would have to be priced very competitively to tackle Intel Core-X processors with higher core counts.

Moving on from Geekbench, the 1950X gets tested in SiSoftware Arithmetic and Multimedia workloads where it scores 434.32 GOPS and 821.64 Mpix/s, respectively. The Intel Core i9-7900X here scores 336.20 GOPS (Arithmetic) and 1262.68 Mpix/s (Multimedia) points. These are some really encouraging scores but do keep in mind that the AMD chip was overclocked to 3.9-4.0 GHz clock speeds during these tests. We have seen similar results of the AMD EPYC 7000 series workstation processors against Intel's upcoming Skylake-SP parts.

Furthermore, there are some rumors regarding the full AMD Ryzen Threadripper lineup. It looks like the full lineup has already been detailed and will include nine SKUs. There will be two of 16, 14, 10 core and three 12 core models. These have not been confirmed yet but the prices of the entry level 16 core chip are expected to be north of $800 US. 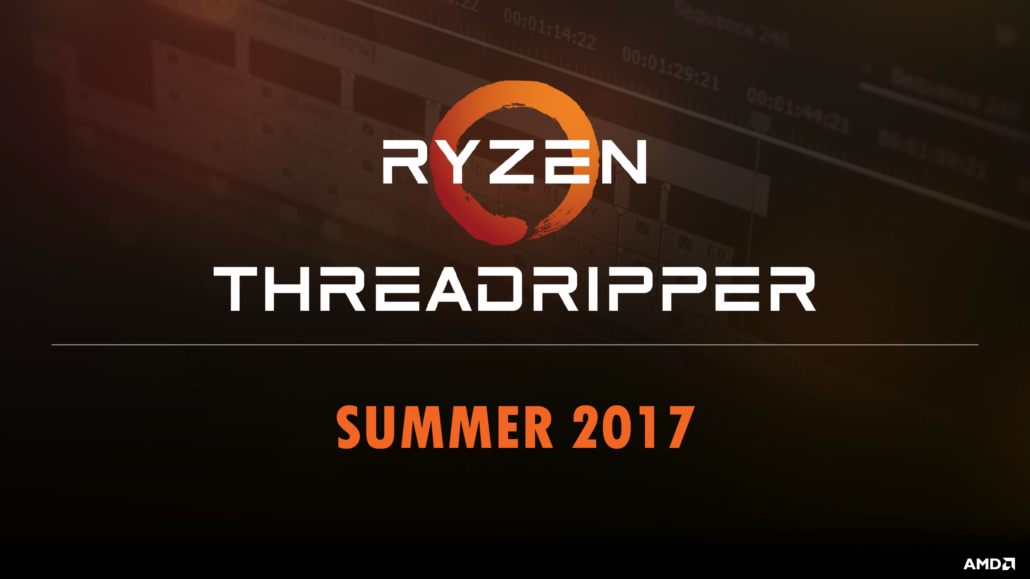 The flagship of the series would be the Ryzen Threadripper 1950X which is the 16 core variant with a base clock of 3400 MHz and a TDP of 155W. You can find details of all the SKUs in the table below but do note that these models are yet to be confirmed.