We finally have gotten our hands on a legitimate 3DMark entry pertaining to AMD's upcoming RX Vega gaming graphics card. This particular database entry is of the flagship reference RX Vega board, code named 687F:C1 and not only does it confirm several pieces of info regarding the board's specifications, it has also given us a glimpse into what to expect from AMD's upcoming high-end offering in terms of performance. So without any further ado, let's get into the juicy bits!

The clock speed represents a modest 30MHz improvement over the Vega Frontier Edition and the HBM2 frequency is identical to that of Vega FE which translates to 484GB/s of bandwidth. This, funnily enough, translates to 1GB/s of bandwidth per mm² as Vega 10 is 484mm² in size.  In terms of memory capacity, as expected this board, which we expect to be the Vega 10 flagship in the RX lineup, comes equipped with 8GB of HBM2, rather than the exuberant 16GB of the Vega FE.

To deliver 16GB of memory in two HBM2 stacks in the Vega Frontier Edition each stack has to be 8-Hi. 8-Hi HBM2 stacks are considerably more expensive and difficult to produce compared to standard 4-Hi HBM2 stacks which is why it makes all the sense in the world for AMD to opt for the 8GB option on its gaming Vega card, at least for now.

Before we proceed to the 3DMark 11 performance benchmarks, there are a few significant developments that have occurred since we last saw a Vega 687F:C1 engineering sample which I'd like to highlight.  First things first, the clock speed has seen a considerable bump to 1630MHz from 1200MHz and HBM2 clock speed has also seen a very significant jump from 700MHz to 945MHz.

If you go back to our deep-dive article on AMD's Vega 687F:C1 board you will discover that we have in fact predicted that this will happen, not only that we also accurately predicted how this will affect the card's performance standing against the competition from NVIDIA. If you haven't read the article I'd highly advise you to do so before you proceed as it will serve as a crucial preface for the 3DMark 11 Performance figures you're about to see.

Now, on to the bit most of you have been waiting for, actual performance data for AMD's upcoming gaming oriented RX Vega.  We'll only be looking at the graphics score in this test, because that's what's actually representative of the GPU's performance. The combined score on the other hand is influenced, as the name implies, by a combination of GPU & CPU performance. 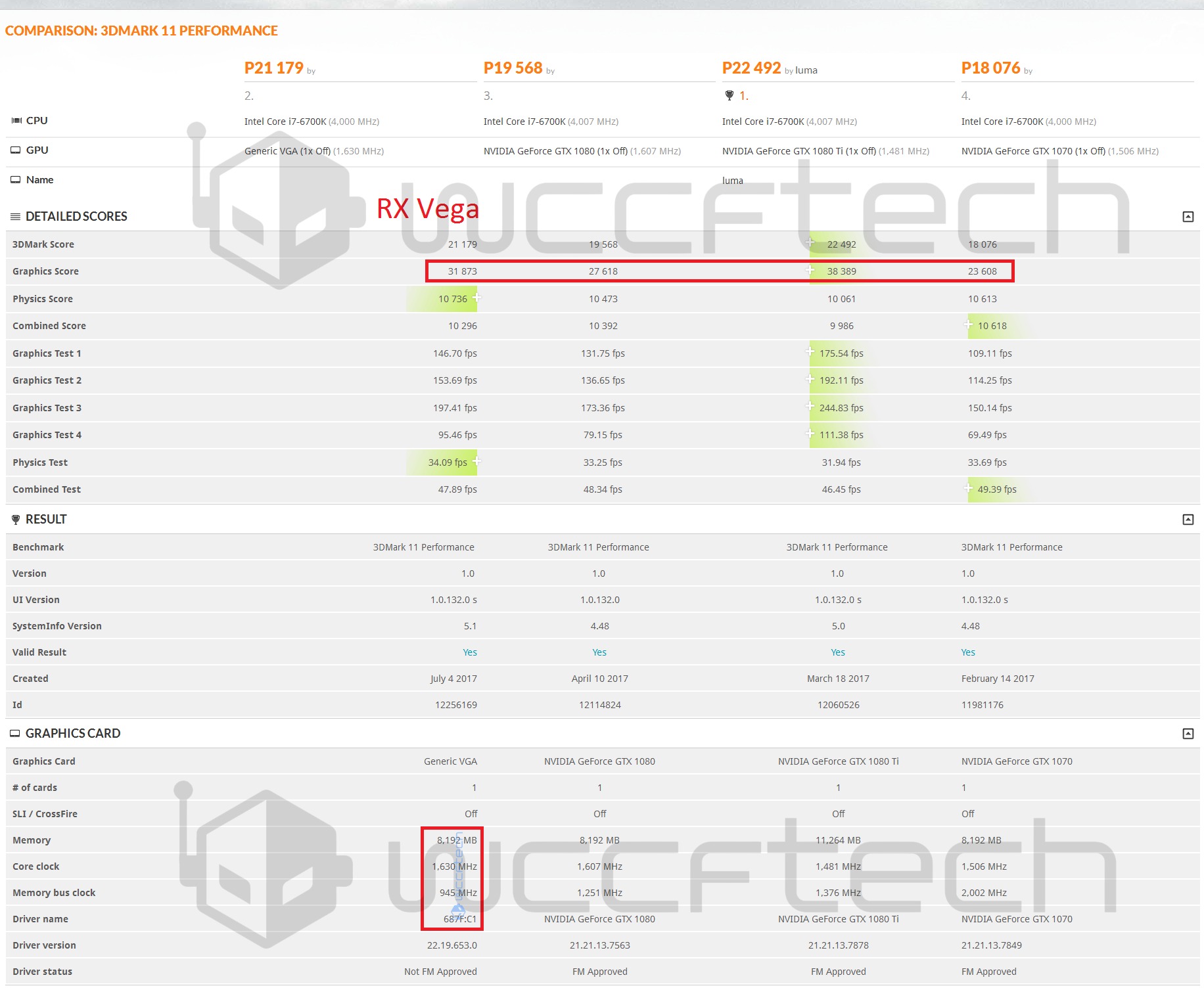 It's important to point out that 3DMark 11 graphics scores scale exceptionally well with GPU core counts. This is why we see the GTX 1080 Ti maintaining a solid 39% lead over the GTX 1080 here, where in more realistic real-world gaming scenarios it's ahead by a slightly more modest 34% and 28% at 4K and 2560x1440 respectively.

This brings me back to the Vega 10 engineering sample deep-dive article I did back in May where I had said that all the signs are pointing to RX Vega being a GTX 1080 contender, rather than one for the 1080 Ti as many Radeon fans had hoped. With all of the information, tests and data that has come out since then, I feel strongly that this is still the case.

With that being said, I'm not going to sit here and pretend to know exactly how many frames RX Vega is going to get in game A or game Z come launch day, nor am I going to claim that this 3DMark 11 benchmark can come close to painting a full picture of how well or otherwise RX Vega, or any other graphics card for that matter, performs in the wide array of applications available out there. It does however, give us a fairly good idea of where RX Vega generally fits in the market, especially in the context of NVIDIA's high-end roster.

What Makes Or Breaks Vega

I fully expect to see another RX Vega graphics card that will slot-in right below the RX Vega card in the above chart to compete at a lower price point. At 484mm² Vega is significantly larger than GP104 which is only 314mm² in size. This means it's more expensive to produce, so as such, pricing RX Vega to compete with the GTX 1080 and GTX 1070 is going to be very tricky for Raja Koduri and his team. The more performance they manage to squeeze out of the silicon the more wiggle room they will have come launch day.

There's still a strong appetite for high-end graphics cards among PC gamers. Slightly faster and/or cheaper alternatives to the GTX 1080 and 1070 in combination with FreeSync's attractive cost advantage versus G-Sync could prove to be a compelling enough proposition for some gamers, especially those looking to make the move to higher resolution adaptive-refresh rate technology monitors.

Many have already made the move to a FreeSync monitor and are simply waiting for a faster Radeon card than the RX 580 to drive it. But then again, all those gamers who have upgraded to a GTX 1070 or a faster card are customers that NVIDIA has taken out of AMD's reach. For others that fit neither category, it's going to take more convincing. Naturally, RTG could sweeten the deal with a high-profile game bundle or more aggressive pricing, but with the latter they risk a price war with NVIDIA. One that, with a significantly larger chip, they simply cannot win.

One thing's for sure, whether Raja and his team have done enough to make RX Vega a compelling product will only become clear when it launches at the end of the month.