In quite a shocking turn of events AMD's RX Vega 64 manages to outpace NVIDIA's GTX 1080 Ti by up to 23% in the upcoming DirectX 12 ready Forza 7. The racing game officially debuts next Tuesday, 3rd of October on PC but folks over at ComputerBase.de managed to get their hands on it early to run their usual graphics performance tests and the results were surprising to say the least. So without any further ado let's dig into the numbers.

The test system included an Intel Core i7 6850K overclocked to 4.3GHz, paired with 16GB of DDR4 memory running at 3000MHz in quad-channel mode. The drivers used were Crimson ReLive 17.93 for AMD and 385.69 for NVIDIA. These drivers are officially optimized for Forza 7.
All graphics options were set to their maximum settings and 8 x MSAA was used in all three resolutions tested. 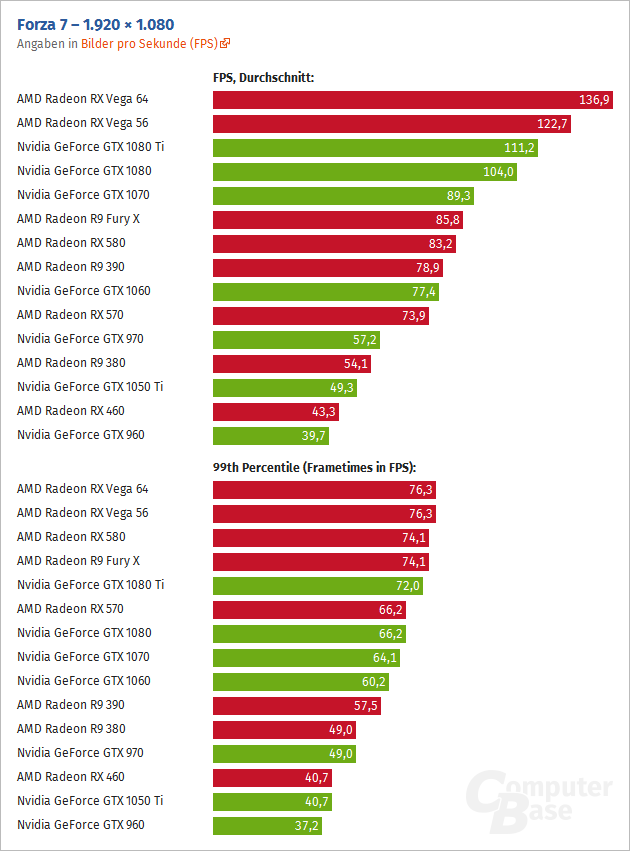 99th percentile frametime analysis, which focuses on smoothness, shows the Radeons consistently out-smoothing their GeForce counterparts across the board, in some cases significantly so. For example, the RX 580 manages to deliver a measurably smoother framerate than the GTX 1080 and even the GTX 1080 Ti. 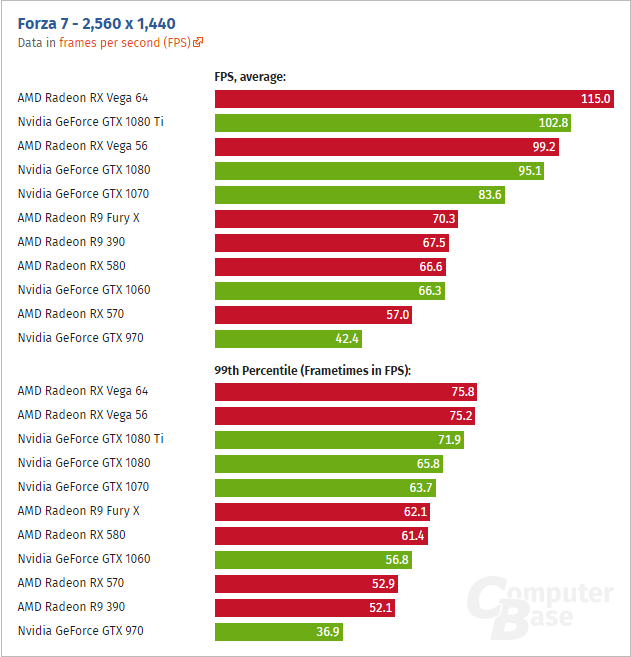 Frametime analysis still shows the Radeons enjoying a comfortable smoothness lead over their GeForce counterparts. Although the hierarchy shifts slightly to the regular order that we've come to expect. The 580 is no longer smoother or even as smooth as NVIDIA's top dogs and is much closer to its GTX 1060 competitor. At the high-end the Vegas still lead in smoothness. 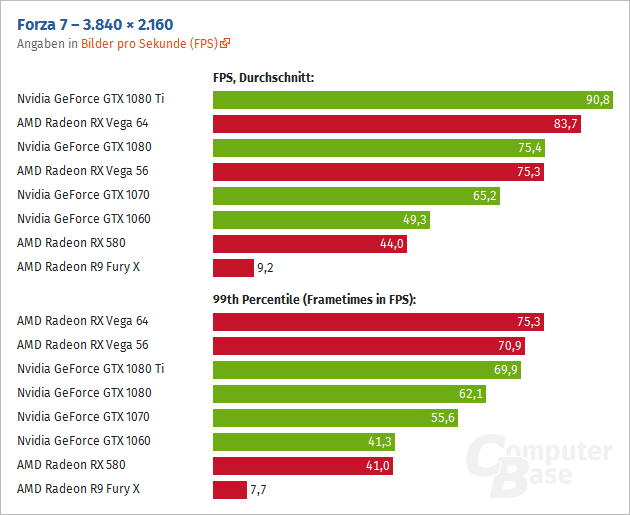 At 4K we finally see things fall somewhat back to regular order. The GTX 1080 Ti finally retakes the lead, but is still far from its usual 30%+ advantage.  The RX Vega 64 still leads its competitor the GTX 1080 and the RX Vega 56 still significantly leads its competitor the GTX 1070. In the mid-range the GTX 1060 retakes the lead from the RX 580 and the Fury X simply runs out of memory and falls on its face.

But once again, frametime analysis shows the Vegas in the lead. Despite the GTX 1080 Ti's average framerate advantage over the RX Vega 64 and 56, it delivers those frames in a slightly choppier manner. 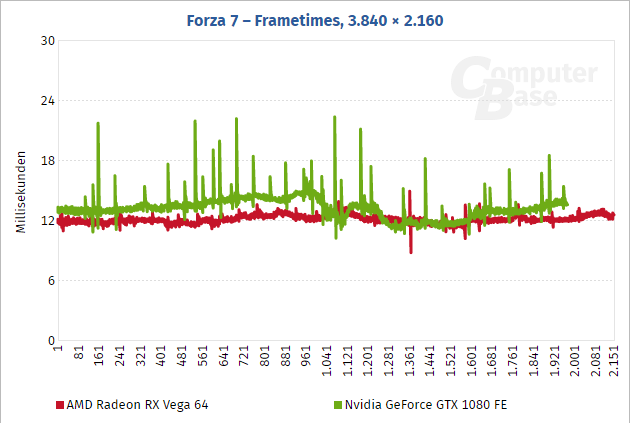 ComputerBases's frametime analysis at 4K demonstrates this, although they compare the RX Vega 64 to its direct competitor the GTX 1080. The RX Vega 64 manages to deliver both a consistently higher framerate and consistently lower frametimes than the GTX 1080. Which means it delivers more frames per second and does so in a significantly smoother cadence, with far less choppiness and considerably fewer lag spikes.

Wrapping Things Up - What Exactly Is Going On?

It goes without saying that the performance of NVIDIA GeForce graphics cards is quite unusual in Forza 7. Close inspection of the data indicates that the GeForce cards, especially at the high end, are running into a significant bottleneck while their Radeon counterparts are not, even though 8 x MSAA was applied across the board.

ComputerBase reached out to NVIDIA and the company confirmed that the results were indeed accurate.

ComputerBase.de - Google Translation
"The ranking in Forza 7 is very unusual. Nvidia has confirmed ComputerBase, however, that the results are so correct, so there is no problem with the system in the editorial regarding GeForce."

So it appears there's some magical driver wizardry that AMD has done to take advantage of the multi-threaded nature of DX12 that NVIDIA has yet to replicate for Forza 7.

Is this merely an anomaly or perhaps a pattern that we could see repeated in future DirectX 12 games? Only time will tell. Although one thing's for certain, Vega can really spread its wings in DirectX 12. Perhaps AMD's partnership with Bethesda will expose more of what Vega can really do in DX12 games.