Something pretty interesting turned up on SemiAccurate Forums. A user has posted what appears to be the official road map for AMD's processors. The leaked slides detail not only the Mainstream side of AMD's processor road map for 2016 and 2017 but also the mobility side of things. It serves as further confirmation of not only what we have been hearing whispers of so far but also fits closely to what our internal sources have indicated and even what Lisa SU has hinted at.

The first roadmap details AMD's mobility and All-in-One efforts. Bristol Ridge and Stoney Ridge are both slated for this year on the 28nm process and have already started their life on the shelf. The Bristol Ridge platform features upto 4 Excavator cores and 8 GCN cores with a configurable TDP of 10W to 35W. Similarly Stoney Ridge, which is like a Bristol Ridge cut in half, will rock 2 Excavator Cores and 3 GCN cores with configurable TDP of 10W - 25W. Both of these products are expected to last till 2017 and come in FP4 packaging.

The FP5 based Raven Ridge will be based on the 14nm SoC and will feature 4 Zen cores (which considering the architecture has SMT, translates to 8 threads) as well as 12 Next Generation GCN cores. This is going to be a beast of an APU and will be coming in transfigurable TDP of 4 to 35Ws. The scheduled release for this platform is set firmly in 2017 according to the roadmap.

The second roadmap and the one more interesting - is about AMD's Desktop side of things. First thing you will notice is that the Bristol Ridge roadmap is queued for the 2016-2017 time frame as well - yet we have not seen any of the APUs out in the open as of yet. Based on the promontory chipset, these APUs require the AM4 motherboard which have yet to debut.

Summit Ridge and Raven Ridge however, are both firmly slated for release in 2017. Summit Ridge is of course the mainstream Zen platform which will be rocking 8 Cores and 16 Threads. The socket in question is the new unified AMD4 socket which requires the promontory chipset and will have configurable TDPs of 65W to 95W (the standard). It is refreshing to see that AMD is not focusing on lowering power requirements and sacrificing performance for the high end desktop segment and is only focusing on low TDP envelopes where it is absolutely required.

We have already revealed that AMD will initially only be using octa core dies in the fabrication process of Zen based processors. This method will be the optimal route to use in the production of its Summit Ridge processors because not only will it allow for cost savings (just one die) but will result in the initial wave of Zen x86 CPUs being exceptionally powerful. Since the company is going to be pitting the brand new architecture against Intel’s offerings, which has so far been ahead of the game, Octa-Core and Hexa-Core Zen processors with SMT should be able to compete effectively with their blue counterparts.

Raven Ridge is also going to have an AM4 counterpart for desktop with the same compute configuration as its mobility (FP5 packaged) cousin. With 4 x86 Zen cores and 'next generation graphics' the lineup is set to succeed the Bristol Ridge platform sometime later in 2017. The TDP will be configurable between 35W to 95W.

The AMD roadmap confirms quite a few things that we have heard around the rumor mill already. However, we did our own deep digging after receiving this leak and found out some interesting things:

Here is the thing however, this might seem like a let down but if we are to look at what AMD's Lisa Su has been stating all along - it fits neatly:

We have been very focused on the server launch for first half of 2017. Desktop should launch before that. In terms of true volume ability, I believe it will be in the first quarter of 2017. We may ship some limited volume towards the end of the fourth quarter, based on how bring up goes and the customer readiness. Lisa Su, AMD CEO via AMD

Zen is going to be a disruptive force as far as the performance/$ metric is concerned, and offers more than double the performance of its predecessor. It will be going up against Intel's Kaby Lake series of processors and it remains to be seen how the two will compare. However, it doesn't look like the public will be seeing it before 2017. AMD is also currently working on the huge Naples Zen processor which rocks upto 32 cores in a single package. 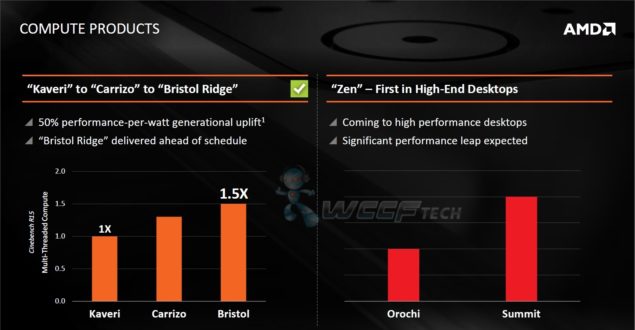