An alleged AMD roadmap from Twitter fellow @MebiuW has once again been updated with his latest information showcasing the next-generation Rembrandt Ryzen APU family. We have seen this same roadmap being updated in bits and pieces by the source and now we get an early look regarding AMD's 2022 APU family.

As per the new details, AMD's next-generation Rembrandt Ryzen APUs will be based on the Zen 3 and RDNA 2 GPU cores. But these aren't just any Zen 3 / RDNA 2 cores, the roadmap also mentions that the chips will be based on a 6nm process node. AMD is expected to retain TSMC's as its choice of fab for the Rembrandt CPUs and as such, we can expect around 20% higher density with better power consumption on the improved node. 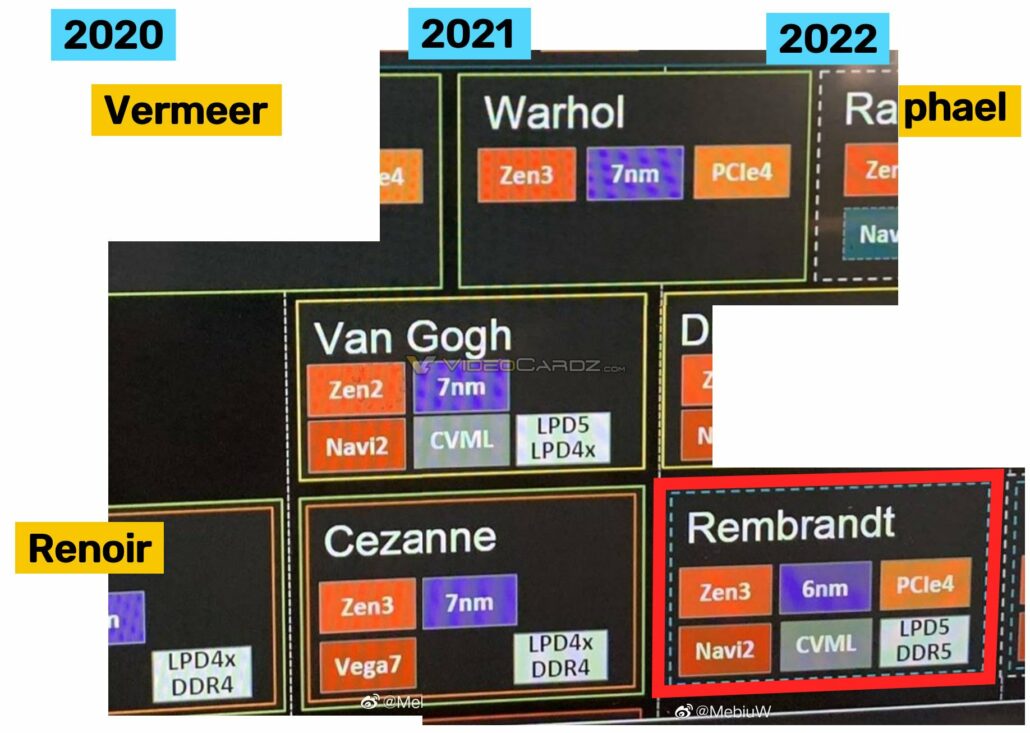 The Zen 3 cores themselves will mark a major update to AMD's Zen architecture with the company recently calling it a "tremendously powerful" architecture. In addition to the Zen 3 cores, AMD will also be featuring its RDNA 2 based Navi 2 GPUs on Rembrandt Ryzen APUs. The APUs will feature great CPU and graphics processing capabilities with the two architectures onboard. In addition to the core technologies, AMD will also feature its CVML (Compute Vision & Machine Learning" system onboard the Rembrandt chips for better AI capabilities that would directly target Intel's future-gen AI-enabled chips on the desktop and notebook segment.

AMD's Ryzen 6000 (Rembrandt) APUs might be the first APU family to hit the AM5 socket. The new socket will allow full support for the said chips along with features such as DDR5 memory support. The Rembrandt desktop APUs will launch around early 2022 so the AM5 platform should be out by that time. We can expect the first AM5 motherboards to be available by the time AMD's next-gen Warhol Ryzen CPUs hit the market which should be around 2H of 2021.