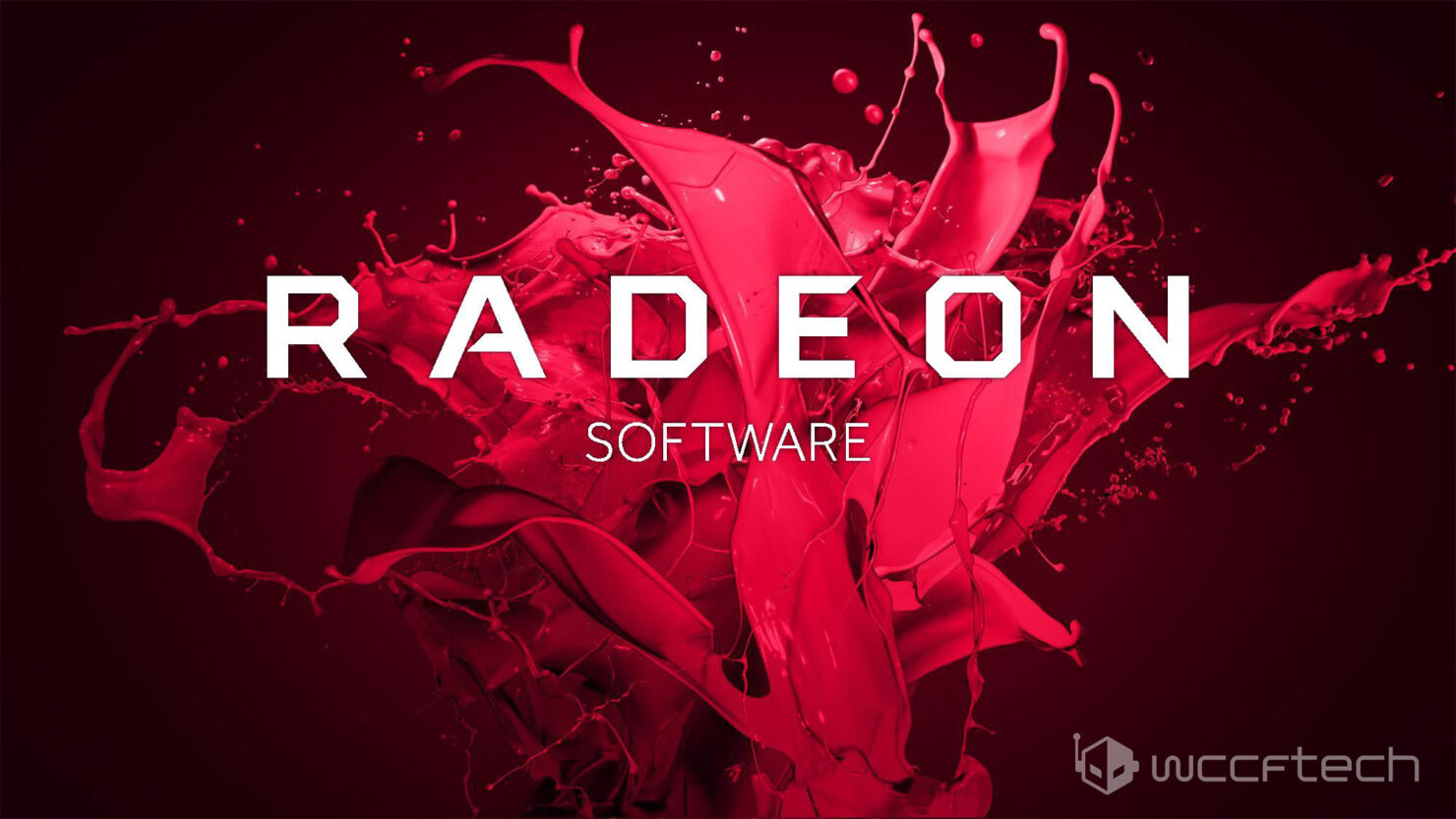 AMD is preparing a massive update for Radeon drivers yet again in the form of the Crimson ReLive Edition. The new driver software are designed for the latest Radeon and Radeon Pro graphics cards with a huge emphasis towards performance and additional features.

The new Crimson ReLive Edition update brings a number of new features and enhancements to a wide range of AMD Radeon GPU and APU products. The latest update is an accumulation of all Radeon Software Crimson releases into one package, offering a dramatic increase in performance through software optimization. AMD RTG has done a great job with the new Crimson drivers and their dedication to support their customers with excellent drivers for their products has really paid off.

Since its inception, the Radeon Software division has released 29 drivers of which 8 were WHQL releases, supporting and optimized for over 28 gaming titles and have been downloaded over 85 million times. This means that users have developed a trust for AMD Radeon software due to their consistent improvements along with rapid deployment of software optimizations.

DirectX 12 performance is tuned for the AMD cards which is a direct result of the constant improvements in Radeon Drivers. DirectX 12 technologies such as low CPU overhead and asynchronous compute have been a shining example of AMD's lead. With AAA gaming, VR and deep pixels being the highlight of PC Gaming, AMD is offering added support in the form of hardware and software to leverage user experience on their products.

In 2014, AMD released Catalyst Omega followed by Crimson Edition in 2015. 2016 marks the launch of the new Crimson ReLive Edition which is a combination of both Radeon Software and Radeon Pro Software. Just like before, AMD is focusing on GPUOpen which is their initiative to help developers collaborate with them by using open standards allowing them to create, share and collaborate.

One of the new OpenGPU features is Radeon Loom which is kind of AMD's answer to NVIDIA's Ansel tech. Though not entirely the same, the feature lets you stitch photos in real-time in a 360 degree view. You can use 4K x 2K or 8K x 4K modes which is pretty nice for the Radeon guys, given that games are actually starting to use this tool. 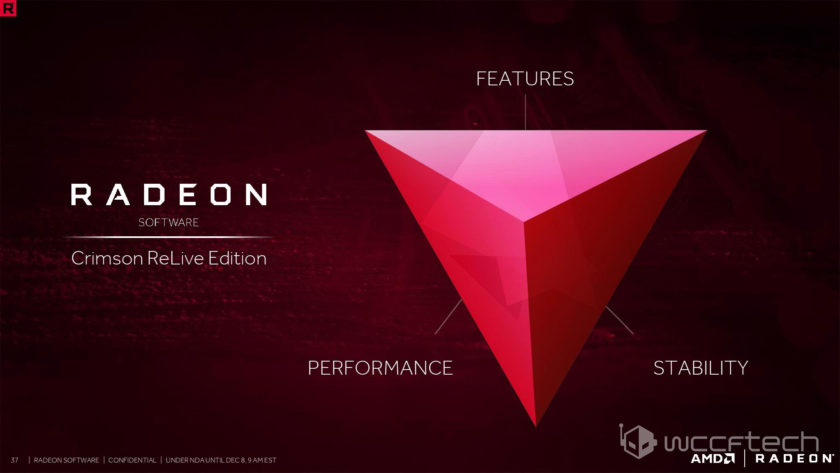 First of all, we have the usual bug fixes and there are a ton of them within the new drivers. These fixes are mentioned below:

Current Issues that will be fixed for Radeon Software Crimson ReLive Edition launch:

On the performance side, Radeon cards such as the RX 480 see up to 8% performance increase with ReLive. AMD also highlights that we are entering into the era of deep pixels with gamers shifting to 8K resolution monitors with HDR and FreeSync support. AMD is also adding a signal detection utility in their drivers which allows users to detect bad HDMI cables and signals for diagnostics.

There's also new VP9 decode acceleration offering seamless and fluid 4K 60 Hz video streaming. This enables better visuals for consumers to enjoy. Radeon cards also get support for Dolby Vision and HDR 10 which offer increased brightness, contrast and color. AMD's FreeSync support is as good as ever with up to 24% lower click-to-response time with borderless full-screen mode. Support for the latest DisplayPort HBR3 has been added in the drivers which allow single-link 4K 120 Hz, 5K 60 Hz and 8K 30 Hz rates.

One of the new features to slide their way into Crimson ReLive Edition is Radeon Chill. This is a new power saving feature that dynamically regulates framerate based on in-game movement. In tests, the Radeon Chill features up to 31% lower average GPU power.

HOW DOES RADEON CHILL WORK?

The Radeon Chill algorithm monitors user inputs in order to determine whether or not quick motion is happening on the screen during a game. If the user is standing still and the display is mostly static, Radeon Chill quickly scales down frame rates to a lower threshold in order to save power. As soon as the user begins moving or interacting with the scene, Radeon Chill responds by instantaneously increasing frame rates to preserve a sense of fluid motion and responsiveness.

Meanwhile, at all times, Radeon Chill avoids running the game at excessively high frame rates that would waste power with little to no end-user benefit.

Because Radeon Chill’s responses are very quick, gamers may not notice that anything is happening as they play. The Radeon Chill algorithm has been designed to avoid having any perceptible negative effect on the gaming experience.

WHAT ARE THE BENEFITS OF RADEON CHILL?

Radeon Chill has the potential to reduce the GPU’s power consumption, heat production, temperatures, and cooling noise without perceptibly altering the gaming experience.

Again, the benefits of Radeon Chill will vary depending on the game and on the performance of the system in question. In cases where frame rates are very high, with relatively easy GPU workloads like eSports games, Radeon Chill has the potential to pay the biggest dividends.

In World of Warcraft on an 8GB Radeon RX 480, Radeon Chill did the following:

WILL USING RADEON CHILL REDUCE THE RESPONSIVENESS OF MY GAMING SYSTEM?

Radeon Chill actually has the potential to decrease the amount of input-to-response lag compared to a system running without Radeon Chill.

By not running the game loop as fast as possible at all times, Radeon Chill doesn’t keep the GPU’s queues as full. When Radeon Chill does decide to dispatch a frame, the GPU can be ready and waiting to produce that frame very quickly, with little or no work scheduled ahead of it. As a result, Radeon Chill can sometimes reduce input lag. 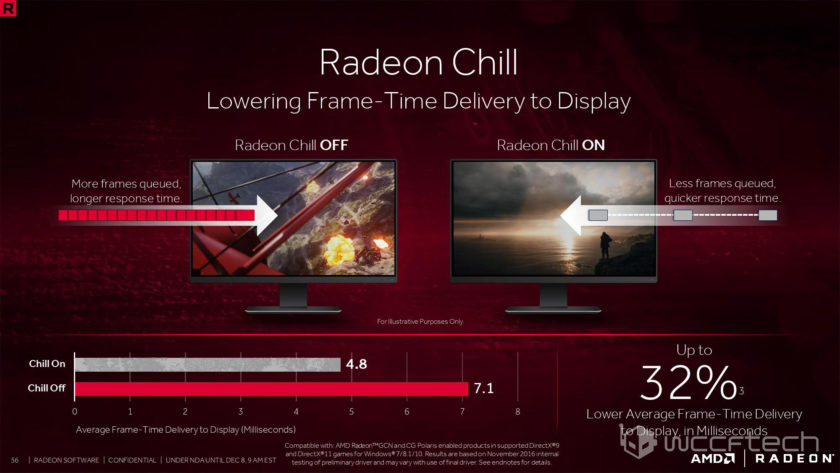 A: Radeon Chill currently works for DirectX™ 9, 10 and 11 applications.

Q: Will Radeon Chill support other API’s like DirectX®12 and Vulkan™ in the future?

A: Not for the initial public release, however we’re looking into developing its functionalities for future releases.

A: Radeon Chill is an excellent match with a FreeSync capable display.

Q: Does Radeon Chill work with any game?

A: No, currently Radeon Chill only works for a set of games that have been tested by AMD.

A: No it currently does not however Radeon Chill does have similar behavior for capping FPS at maximum limits when set per game.

Q: Will Radeon Chill add more games in the future?

A: As more games release we hope to expand Radeon Chill support to a broader set of apps and APIS.

Q: Do I have to enable Radeon Chill for games that are supported?

A: No Radeon Chill is a completely optional feature with toggles for both enabling the feature globally as well as per game.

Capture, stream and share your greatest moments and gaming wins with Radeon ReLive Edition. Modify settings quickly, conveniently, and play seamlessly with the easily accessible in-game toolbar. Express yourself in bold new ways with custom scene layouts. Upload your latest highlights and let them be a conversation piece. It’s never been easier to build and grow your online community at anytime, anywhere.

Radeon ReLive Edition and its features have many configuration options within its own navigation tab on the home page for Radeon Settings once it has launched.

While Radeon WattMan initially supported the new Radeon 400 series cards, the latest updates allows support for even more GCN products. These include the Radeon 200 series, Radeon 300 series and Radeon Fury series products that are listed in the slide below.

AMD isn't stopping at consumer products and are extending the software suite to their Pro series. The Radeon ProRender software already adds several plugins and native integration with a wide range of 3D content creation tools such as 3DS MAX, MAYA, Blender, SolidWorks, Rhino and Maxon Cinema 4D. AMD is also working with game developers, incorporating their Radeon technologies into professional workloads such as Unity and Sting Ray.

A year over year performance leap shows up to 30% improvement of Radeon Pro graphics cards. This is all due to the commitment to updates for the enterprise made by AMD.

The AMD Crimson ReLive Edition will be officially available on 8th December at 9 A.M EST and AMD users should look forward to them for increased performance and optimization. Once again, the AMD Radeon Technologies Group has blown away their users with superb quality drivers that offer the best support for the graphics cards and APUs.