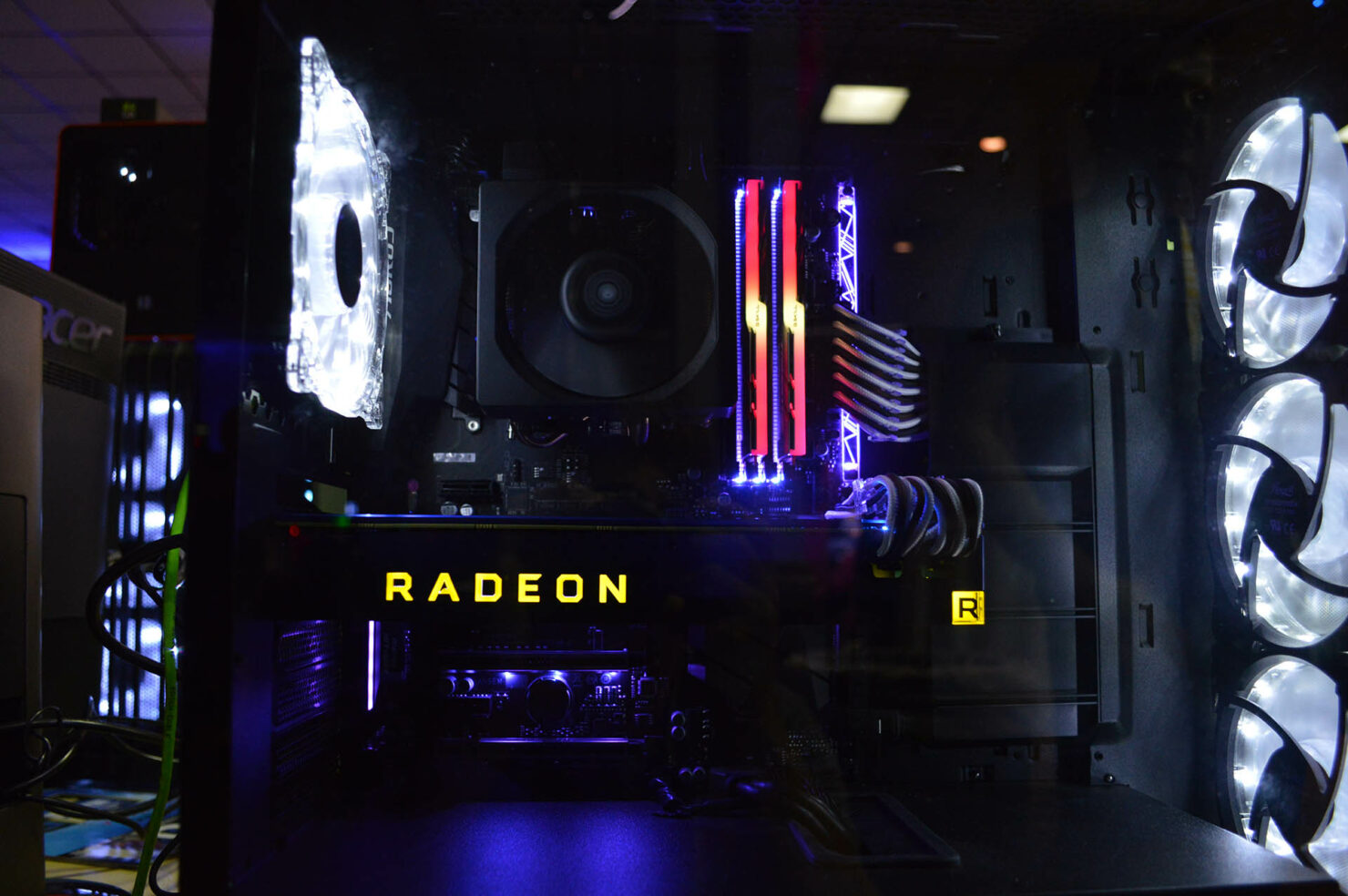 We're exactly one week away from SIGGRAPH, a 4+ decade old annual tech conference on PC graphics, where AMD will officially launch RX Vega. The company is expected to debut a roster of next generation Radeon Vega gaming cards to cater to the high-end segment of the gaming market. An area where it hasn't launched any graphics products since its Fury family in 2015.

This makes Vega a big deal, both for AMD itself and its fans. Which is exactly why the folks at the Radeon Technologies Group decided to take RX Vega on a mini tour over the past couple of weeks, starting in Budapest Hungary and ending in Portland, Oregon. This tour was meant to be the appetizer ahead of the entree' that is the RX Vega debut coming up in a week's time. And while we were unable to make it to Budapest, we were lucky enough to be able to bring you a taste of Vega from PDXLAN in Portland. Thanks in no small part to friend of the site and Oregonian Shaun Fosmark. So without any further ado let's dig into the juicy bits! All you're about to read and see from this point on has be authored and captured by Shuan.

A Taste of RX Vega And The PDXLAN Experience

PDXLAN and the RX Vega Challenge - an experience, not a reveal.
By Shaun Fosmark

I was originally going to write separate pieces for this but RX Vega and PDXLAN were an experience.  This was not a "reveal" for RX Vega as much as it was a statement, and the point was well delivered. We will get to that though...

First of all, what is PDXLAN? It can only be described as LAN party heaven. There is a hectic schedule of events, contests, and announcements that will keep you running around and busy winning prizes. There is a variety of gaming tournaments that one can enter and winners will be chosen by trial. PC eye candy is everywhere. No matter which direction you look, there is something to look at. Builds from mild to wild and everything in between.

So why are they doing all this? Charity. Vector, PDXLAN's administrator, and his staff have been able to create a charity powerhouse out of PDXLAN averaging 75,000 dollars a year to charities while creating an event that engages gamers and provides an accepting and open environment for the gaming culture.

Now Lets talk about the RX Vega Challenge. This is what they were calling it. Gamers were invited to sit at two heavily shrouded gaming systems. After playing on both setups, gamers were invited to share their feedback on which setup they thought was faster or better in return for very cool custom Vega challenge PDXLan shirts.

The systems consisted of Ryzen builds (I was able to gleen that information) and RX Vega and an undisclosed high-end Nvidia card although gamers have speculated anywhere from 1070 to 1080 Ti. The monitors were high quality curved screens running Freesync and G-Sync Respectively.

We played Battlefield 1, the resolution was set at 21:9 3440x1440 with uncapped frame rate. Other than some slight monitor quality differences (and feed back varied greatly on who preferred which screen) I personally could not tell the difference. Both systems offered a very smooth game play, the pictures were crisp, and there were no noticeable drops in performance on either setup.

Now, AMD did reveal the results of the polling and that returned some interesting results. It was a near perfect split in thirds. One third of people said they absolutely could not tell the difference, one third of people preferred the right side, and last but not least one third of people preferred the left side. Now these are just the raw numbers. During AMD's presentation of this data, they brought up the pricing difference between comparable freesync and gsync monitors, both curved wide screen. The Freesync monitor was $499 and the G-Sync version was $949. Now here's where things get interesting....

I spent quite a bit of time interviewing gamers who had participated in the challenge to gather some feedback on exactly what gamers thought. I asked 5 basic questions: What were your impressions on the two systems? Could you personally sense a performance difference between the two? What was your reaction to seeing the price difference between the G-Sync and Freesync monitors? Are you likely to purchase an AMD graphics product based on what you've seen here? What are your overall feelings about how AMD is doing right now? I interviewed no less than 20 people with these questions and the feedback was by far the most interesting result of the entire experience.

Just like the numbers revealed, the impressions on which system was better was random and almost always came down to which monitor color or contrast was preferred rather than the actual performance as a vast majority of people revealed that if there was a difference, it was negligible. It was a perfect split on which side people thought was faster when pressed, although a few people revealed that they visually saw the left side "chugging" or "struggling" during very specific periods but It was never revealed to me which system contained the RX Vega product.

Some "experts" I talked to however had very convincing arguments for why they believed the RX Vega was in the right system and the undisclosed NVIDIA card was in the left system based on "monitor features" or "quirks" relating to the panels. The reaction to the pricing differences between the monitors was drastic. A majority of gamers were very receptive to the pricing of the Freesync monitor and said the pricing of the G-Sync alternative was unattainable, although almost everyone expressed concern that purchasing one or the other would essentially lock them into a company's products for the foreseeable future.

Outlook on AMD, Ryzen And Vega

Were gamers likely to purchase an AMD product in the future?... Well the feedback I got here was mostly positive, and some gamers  pledged to buy whatever new card AMD released, most people said they would have to dig into independent reviews before they were able to make a decision. Now the last question revealed the most telling feedback. When I asked "What are your overall feelings about how AMD is doing right now?" The response was exceptionally positive.

The overall message is that AMD has been on a hiatus of sorts for the last 3 or 4 years. A majority of gamers said during that period they didn't even consider purchasing an AMD product. But in the last 3 months AMD has catapulted itself back up with Ryzen. And with Vega AMD is finally on gamers' radar again. They expressed that they actually have to do real research before choosing which products to purchase in the future. In the end, everyone agreed that competition is good and they were happy with AMD's performance recently.

Is RX Vega going to be the fastest graphics product at launch? Who knows. Did AMD make a point with this challenge? Absolutely.