AMD Radeon RX 6600 XT Reportedly Launching in August, Rumored To Be On Par With NVIDIA GTX 1080 Ti For Around $399 US

Alleged pricing and performance numbers of the AMD Radeon RX 6600 XT graphics card have been reported by various leakers. As per the details, it looks like the Radeon RX 6600 XT may not come at the mainstream pricing we were hoping it would but feature performance slightly higher than older expectations.

In their latest videos, Coreteks and Moore's Law is Dead talk about the expected price and launch date of the AMD Radeon RX 6600 XT graphics card. The smallest of the RDNA 2 GPUs we will get is not going to come in at a cheap price. For launch, Coreteks states that the graphics card will arrive in August which is a month away from now so we might hear an announcement either by late July or early August.

As for pricing, the AMD Radeon RX 6600 XT is said to feature a price of $399 US at MSRP. Now, this is obviously much higher than the $299-$329 US pricing we had speculated for the card and puts it at the same level as the RTX 3060 Ti. This is the same price that AMD asked for its Radeon RX 5700 XT graphics card a few years ago and that was based on a higher-end chip than Navi 23. There is no reason mentioned as to why the pricing has seen such a large bump for mainstream variants but it looks like paying extra for the RX 6700 XT would be a better decision if the RX 6600 XT really ends up around $400 US. 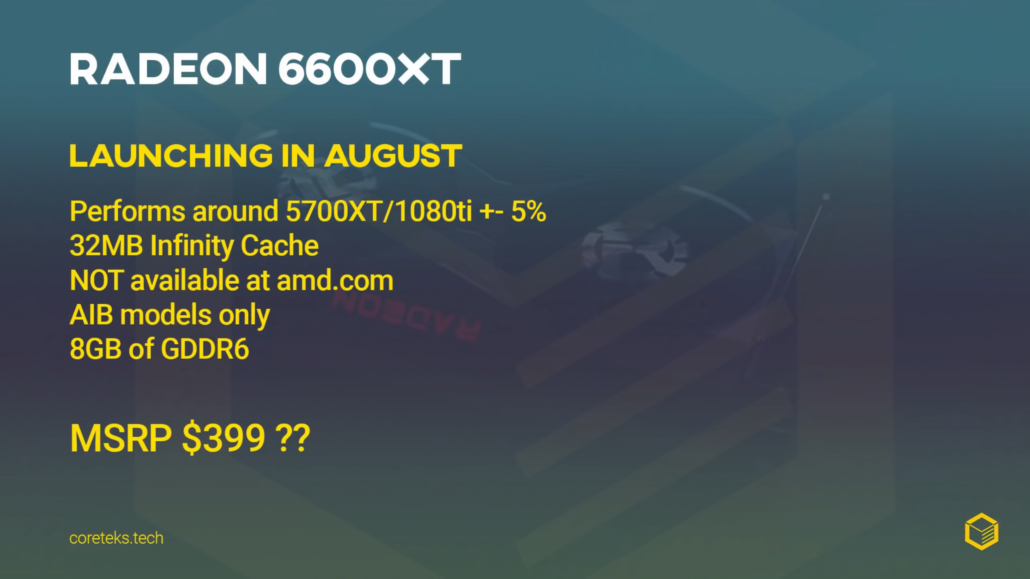 The performance numbers are said to be close to the Radeon RX 5700 XT and GeForce GTX 1080 Ti, give or take 5%. That sounds promising but then again, it should be expected since this is a higher-clocked RDNA 2 chip we are talking about. It will be interesting to see how efficient the Navi 23 GPU based AMD Radeon RX 6600 XT ends up to be but for now, the pricing is looking to be its weakest point.

The pin speeds will be kept at 16 Gbps which will bring the total bandwidth to 256 GB/s. As per the previous rumors, the card is expected to feature 30 MH/s in the Ethereum mining, and in terms of synthetic performance, the card scores 9439 points in the 3DMark Time Spy graphics test. Custom models have been leaking for a while now so we can expect more details later this month on the AMD Radeon RX 6600 XT graphics card.